Objectives: To establish the risk of developing epilepsy by associating a number of factors in children with perinatal stroke.

Methods: 80 children (1-36 months) diagnosed with perinatal stroke were examined in the Department of Neurology of Hospital of Mother and Child Health Care (2010-2016). It was analyzed the interrelation o some factors for development of epilepsy: clinical presentation of stroke, prenatal ultrasound abnormalities, perinatal comorbidities, initial EEG abnormalities, family history of epilepsy, presence of status epilepticus in clinical manifestation of stroke.

Results: Forty-one of the 80 children with at least 1year follow-up data (51%) had epilepsy between 1months– of- age and last follow-up, but in 18 of 41cases epilepsy is resolved and anticonvulsant treatment were discontinued. Th e results demonstrate the presence of strong combination of both factors ( perinatal and postnatal ) for developing of epilepsy . Th us, the presence of the combination of perinatal factors (prenatal ultrasound abnormalities) and some postnatal factors (initial EEG abnormalities, presence of status epilepticus in clinical manifestation of stroke ) reports a logistic regression coeffi cients (2.861 , 2.909 , 3.377) which indicates a strong link between these factors.

Conclusions: Epilepsy is frequent after perinatal stroke. Evidence of infarction on prenatal ultrasound, initial EEG abnormalities and presence of status epilepticus in clinical manifestation of stroke can predict developing of epilepsy in children.

Pediatric strokes have a much higher incidence than previously thought. Risk and etiological factors change with child’s age, but the most important are: congenital heart disease, cerebral malformations and sickle anemia [2]. In about ¾ cases, the etiological factors of stroke can be identified. Only 25% of their etiology is unknown. Lately, due to the increase in the number of children with obesity and associated pathologies: high blood pressure, diabetes, hyperlipidemia, there is an increase in the frequency of stroke among young children [3]. Survivors often develop chronic pathologies including motor and cognitive impairments, language disorders and epilepsy. Contemporary investigation give the possibility of early detection of risk factors for repeated strokes and establish their etiology [4].

The clinical picture of stroke in children has certain peculiarities. In neonates, it is dominated by focal seizures in a single limb. Seizures are noted in many acute CNS pathologies, but about 10% of newborns with seizures are with strokes. In adults, convulsions are not so specific in the clinical presentation of stroke cases [5].

The primary prevention of stroke is the more detailed supervision of children at whom risk factors are known: cardiac pathologies, anemia. Notwithstanding this, stroke often is the first clinical manifestation of the underlying pathology.

Heart disease (congenital and acquired) is an etiological factor of stroke that occurs in about 1/3 cases. The incidence of thrombotic disorders in children is higher than in adults (13% vs. 4%). Among the most well-known are: protein C deficiencies, protein S, antithrombin III, plasminogen, homocistinuria, antiphospholipid antibodies, factor V leiden, prothrombin mutations G20210A. Comparing with adults, where stroke in the thrombophilia are of venous origin, children have both arterial and venous ones [6].

Sickle anemia is a common cause among children with stroke. Children aged less than 15 years tend to develop stroke more often in the sickle anemia than adults, especially in bleeding events.

Transcranial Doppler screening determines a high velocity (greater than 200 cm/s) that suggests a stenosis and would be a predictive factor for the development of stroke, requiring prophylactic transfusions to reduce hemoglobin S [7]. These children would present a risk for the development of arteriopathies such as moyamoya disease.

Ischemic events due to focal post-herpetic arteriopathy and ophthalmic herpes zoster is a specific cause in the pediatric population. Also a specific cause would be the traumatic dissection of intracerebral arteries, resulting in embolization with the subsequent development of cerebral ischemia.

Moyamoya is a noninflammatory chronic vascular disease of cerebral and cervical vessels with the development of internal carotid artery stenosis and occlusion, being commonly associated with Down’s disease, type I neurofibromatosis and sickle cell anemia. Both in children and adults there are a number of pathologies that can mimic the stroke. Therefore, correct diagnosis requires MRI, which is the gold standard in the diagnosis of the disease. In cohort studies, it was determined that in 21% of cases there are a number of pathologies that determine a clinical picture similar to stroke. These include: complicated migraines, psychogenic hypotonia, disseminated encephalomyelitis, postictal paralysis, acute cerebellitis and intracerebral abscess [9].

In the context of the above, the case presented below required a series of neuroimaging and laboratory investigations to confirm the diagnosis and establish the etiology of recurrent stroke (a total of 4) in a 2 years and 6-month-old girl who was hospitalized many times during the years 2015-2016 in the Department of Neurology of the Mother and Child Healt Care Hospital. 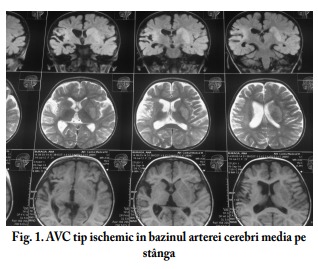 The child (girl) was hospitalized for the first time in our hospital in April 2015 at 1.8 age old with focal seizures of 1-2 minutes duration, fever 39.5ºC and a left side hemiparesis of the body. The diagnosis of acute encephalitis is suspected. Cerebral CT is performed, where two hypodense zones are found in the right temporo-parietal region suggestive to the inflammatory process. Lumbar puncture does not sugest pathological changes. After treatment, the baby is discharged at home. A slight upper monoparis remains on the left side and the baby is repeatedly hospitalized afterv 2 months for medical rehabilitation.

In September 2015 the child develops a status epilepticus with the limitation of movements in the right side of body. Then a stroke is suspected and the child was investigated to determine the etiology of stroke. In addition to laboratory investigations (general blood and urine tests, tests for coagulation, examinations for sickle cell anemia, antiphospholipid antibodies and antinuclear antibodies) that have been found normal, a whole series of other examinations are performed. Echocardiography showed dilated LA and RA cavities with LV normal myocardial pump function, mitral insufficiency gr. II, tricuspid insufficiency gr. I-II, mild pulmonary valve failure and moderate pulmonary hypertension (39 mm Hg).

Cerebral MRI confirms the brain’s cerebral ischemia determining the pattern of ischemic stroke in the middle cerebral artery on the left, and posible post-inflammatory atrophic changes in the frontotemporal lobes on the right (fig 1,2).

Also, the neuroimaging examination confirmed a diffuse area of encefalomalacia in the temporoparietal lobe associated with multiple vascular ramifications (fig. 3).

The child was consulted by the genetic specialist, who suggest the mitochondrial metabolism disorder in the MELAS syndrome (probably). It was presumed a combined pathology of the cerebral vessels and the cardiac pathology. MELAS syndrome could not be confirmed.

Consultation of the cardiologist has confirm the presence of a hereditary cardiac disease (within hereditary metabolic diseases, mitochondrial diseases) or congenital with interatrial or arteriovenous pathological communication that maintain the clinical picture.

In September 2015, the child suffer the third stroke that had a clinical manifestation of a spastic tetraplegia in association with motor aphasia. The girl was examined by performing conventional angiography showing partial contrasting of the anterior cerebral artery and lack of contrast in the middle right brain artery with left vertebral artery hypoplasia (intracerebral segment) (fig. 4).

The child was examined by ECO-cardiography, which determined the presence of a chronic constrictive pericarditis (thickened pericardium, more pronounced along the LV with signs of focal calcifications), and the idea of a restrictive cardiomyopathy was suggested. The LV and RD were normal, with no signs of restrictive diastolic dysfunction. The atria has been dilated and coronary sinus dilation (persistent superior cava vein) has been

found. In the tissue Doppler examination, myocardial velocities were diminished. The lower cava vein was dilated: 13 mm. Severe HTP (55 mm Hg). In order to confirm the cardiac pathology, MRI ventricular coronography was performed, confirming the pronounced dilation of LA and moderate RA, the pronounced dilation of LA with the presence of a 21x9x10 mm thrombus in LA (fig. 5).

Thus, based on the data obtained from the examinations we were able to confirm the diagnosis of restrictive cardiomyopathy with the association of a diastolic dysfunction of RV with left atrial overload. The child receives Sintrom 0.5 mg / day and digitaldiuretic therapy. The last stroke was noted in February 2016, when the child develops a convulsive status and was hospitalized in intensive care unit. In the cerebral CT examination, a subacute infarction in the left anterior cerebral artery area is established. The child is consulted repeatedly by the genetist who excludes hereditary thrombosis by performing a set of specific investigations and analyzes: the results of the spectrum of amino acids in urine (generalized hyperaminoaciduria) are not correlated with the amino acid spectrum in the blood. The presence of hyperaminoaciduria was suggestive in the context of clinical manifestations of congenital glycosylation disturbances.

Considering that the condition of the child remains very serious, with multisystemic impairment, including CNS, muscular, cardiovascular sistem, amino acid residues suggestive of generalized hyperaminoaciduria with signs of tissue hypoxia, brain MRI data for multiple ischemic areas, In the child a mitochondrial encephalopathy was suggested that would support the diagnosis of MELAS syndrome (possibly) with multisystemic impairment.

Based on all of the above, we have established a final diagnosis of: 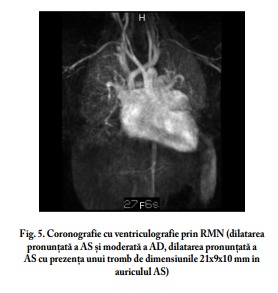 1. Signs and symptoms in clinical picture of stroke in children are nonspecific, so the diagnosis of cerebral ischemia may be delayed.

2. The primary role in the establishment of etiological and risk factors are the history of the disease and the clinical examination.

3. MRI would be the gold standard for diagnosis and other tests are required depending on clinical manifestations.