Objective This research is a retrospective, analytical, descriptive study and has as an objective the analysis of the clinical presentation in the first acute psychotic episode in children and adolescents, quick and correct identification being the premise for precocious intervention and a good prognosis. Material and method. The study group was composed of patients diagnosed with acute psychotic disorder over a period of four years in the Child and Adolescent Psychiatry and Addiction Clinic, Children’s Emergency Hospital, Cluj, during 2011-2015. 60 children and adolescents were included in the study, diagnosed with acute psychotic disorder, according to ICD-10 criteria, having an age of 11 to 18 years at the onset of the disorder. Data was collected from observation charts from the clinic’s archives and we only took into consideration the first presentation for this diagnostic, avoiding counting relapses. Data analysis was made using statistical analysis and GraphPad. Results Correlations have been made between type of onset depending on sex, age of onset, home environment, type of family, presence or absence of a family history of psychiatric disorders, current symptoms, comorbidities, presence of a psychotraumatic factor, duration of untreated psychosis and prodrome. Conclusions We remark a duration of untreated psychosis of a mean 19 days (SD=2,46), which can be explained by the fact that the patients included in the study are minors in the care of parents that have noticed the symptoms and requested a psychiatric consult, a fact that accentuates the importance of caretakers.

Introduction:
The first psychotic episode is a phenomenon that creates confusion and brings suffering to the person and family, lack of insight leading to postponing presenting to the doctor and to delaying treatment.
The term of psychosis is used to describe a process of distortion or losing contact with reality, while maintaining consciousness.
Positive symptoms of psychosis include: delusions, hallucinations, distortion of communication, disorganized behavior. Negative symptoms may be represented by: flat affect, alogy, avolition, anhedonia, attention impairment. Other cognitive and affective symptoms may complete the psychotic symptomatology [1].
The prevalence of psychotic disorders is estimated to 9% in the United States of America, both in adults and children, short psychotic disorder being more frequent in women [2].
According to ICD-10 classification, the first psychotic episode can manifest through an acute polymorphic psychotic disorder – with or without symptoms of schizophrenia or an acute psychotic disorder schizophrenia-like. Acute psychotic disorder may be a first diagnosis of schizophrenia when the duration of symptoms is shorter than one month [3].
Studies show a conversion rate of acute psychotic disorder in schizophrenia between 20-50% [4].
The onset of psychotic symptoms is usually preceded by a prodromal period, which is characterized by a variable functional degradation. The prodrome may last from a few days to several years [5].
An important indicator for evolution is the duration from the onset of psychosis until the presentation to the doctor (duration of untreated psychosis – DUP) and represents the time that has passed from the manifestation of the first psychotic symptoms until an adequate treatment was administered [5].

Materials and method:
60 patients were included in the study from the Child and Adolescent Psychiatry Clinic in Cluj-Napoca, with ages between 11 and 18 years, diagnosed with acute polymorphic psychotic disorder, acute psychotic disorder schizophrenia-like, schizoaffective disorder, acute and transitory psychotic disorder, according to ICD-10 criteria, during January 2011 – January 2015.
We excluded from the study patients under the age of 11 years old, those who already were 18 years old, those diagnosed before January 2011, patients that were previously treated in another clinic, those with antipsychotic treatment in the month before admission, those with incomplete data in the observation charts and those with psychosis caused by use of psychoactive substances.
Data was collected from observation charts and was processed using statistical analysis in Microsoft Office and GraphPad, IQ was calculated using Raven’s progressive matrices.

Results:
Group description
In what concerns sex distribution, we can see a slight predominance of the female gender (54%) over the male one (46%), with a frequent apparition of the psychotic symptoms in only children (19 cases), as against those that are part of a fraternity (Figure 1). 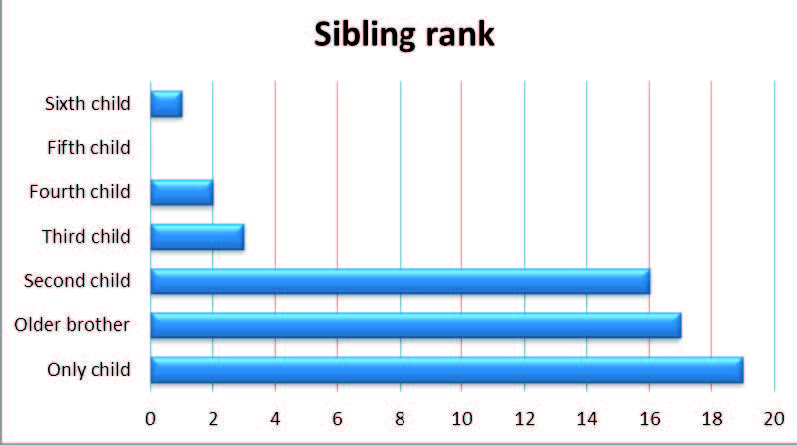 We have observed a high incidence of psychosis in children that were born in winter months (12 patients born in February as against one patient born in July) (Figure 2), in an urban environment (63%). 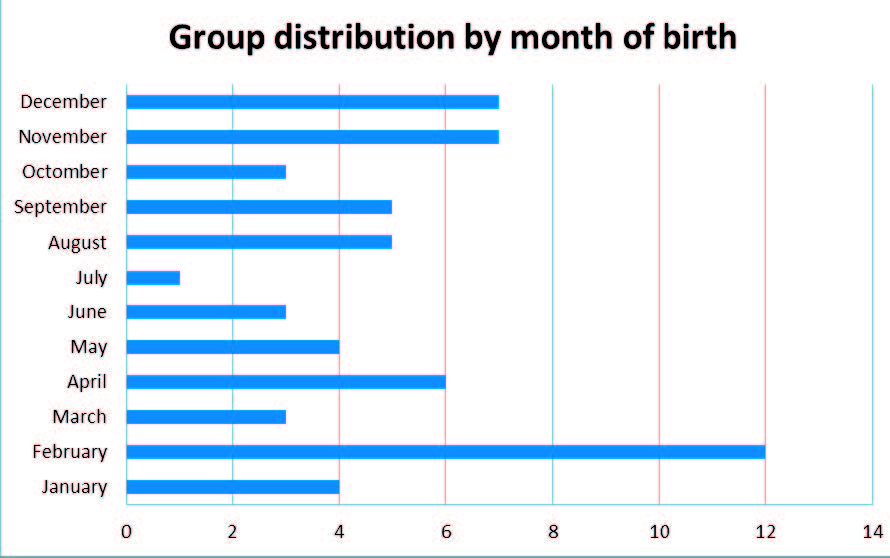 Age: There was no significant statistical difference when comparing the age of children according to sex (15 years for girls, 14.7 years for boys, p=0.20), the presence or absence of a family history of psychiatric disorders (14.56 years for those with a family history and 15.23 years for those without a family history, p=0.29) or according to IQ, the difference being of a month between the group of patients with a normal intellect and that of patients with an IQ<70 (p=0.29). The duration of prodrome was defined as the period of time since a significant change in behavior was identified, such as: social withdrawal, affective flattening, and loss of interest towards activities, lower global and school efficiency, and subtle cognitive deficits. The mean duration of prodrome was of 14.5 months (SD=2.4), with variations between 2 and 36 months (n=20) and a median of 12 months. We observed that patients with onset until 13 years present a prodrome with a mean of 1.5 months shorter that those with an onset after 13 years, but the difference is not statistically significant (p=0.76). Prodromal events: For 37% of patients we have identified a psychotrauma in their history (death of a parent/sibling, history of abuse, significant school stress) and only 8% have admitted to using tobacco or anabolics. Types of symptoms when presenting at the clinic. 65% of patients had auditory hallucinations, 58% visual hallucinations, 85% delusions, 78% disorganized behavior, 40% hetero-aggression, 12% self-aggression, and 82% sleep disturbances (mixed insomnia, onset or maintenance insomnia, nightmares) (Figure 3). 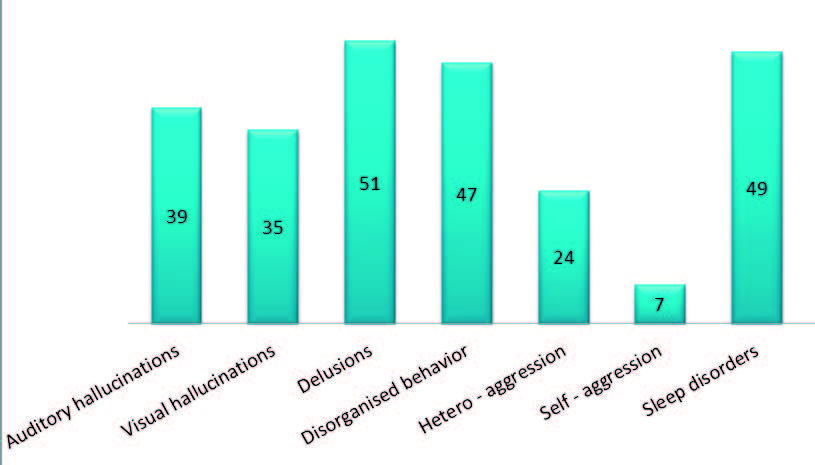 Figure 3. Type of symptoms at admission in the clinic

There was no significant statistical difference of symptoms according to IQ, but we have observed that patients with mild intellectual disability (n=2) do not present with visual hallucinations, but this trend does not maintain for those with moderate intellectual disability (n=3).
Comparing symptoms present at the onset of the psychotic episode according to sex, we observe in girls the predominance of delusions and disorganized behavior, and in boys more frequent auditory and visual hallucinations (Figures 4 and 5). 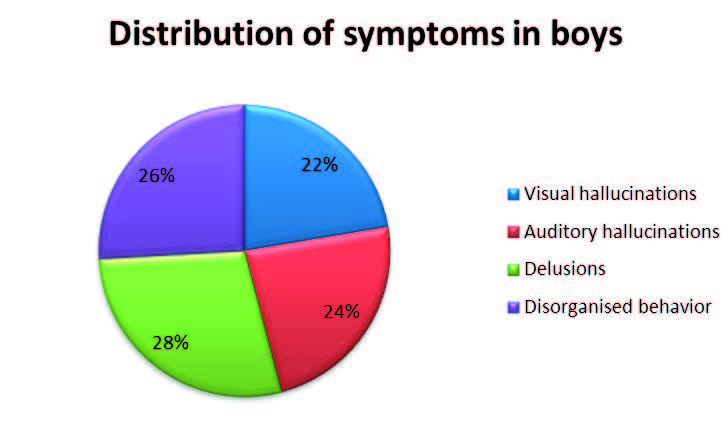 Figure 4. Distribution of symptoms in boys 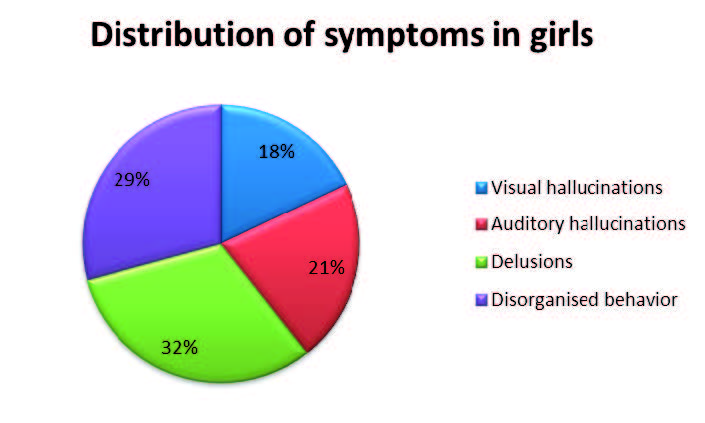 Figure 5. Distribution of symptoms in girls

Comorbidities:
22% of the patients have suffered from frequent infections of the upper respiratory tract, 15% suffered from other somatic disorders, 10% had a craniocerebral trauma in their history, 10% presented with intellectual disabilities, 8% with enuresis, 8% with anxiety disorders, 8% with fever seizures, 8% with other psychiatric disorders (tics, night terrors, emotional disorders, bipolar affective disorder, selective mutism), 7% were diagnosed with conduct

disorder, 3% with depression and 3% with ADHD, while 12% had no comorbidities (Figure 6) 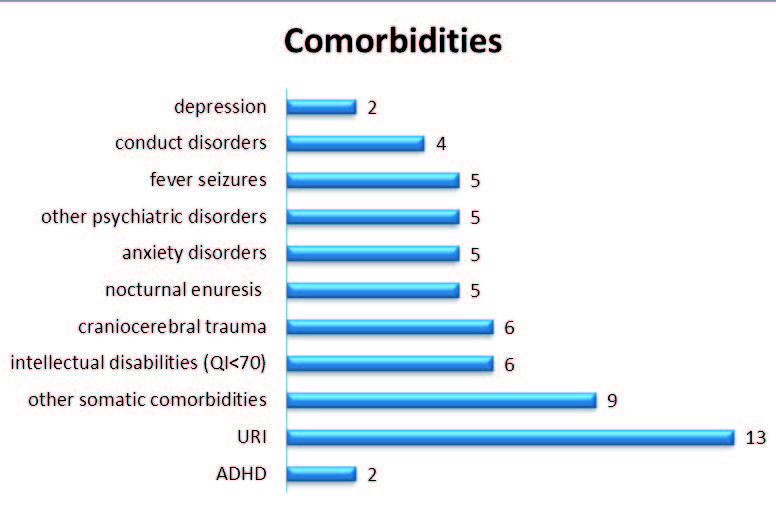 Discussions:
The limits of this study can be attributed to the small number of patients included in the studied group (n=60), the possibility that history data offered by caregivers could be incorrect, incomplete and that data collected from observation charts were collected by multiple interviewers that hadn’t had a proper training prior to this, which could level the differences between evaluations. The results of the current study were compared to those of other researches focused on the first psychotic episode, that were not limited to 18 years, which can lead to an alteration in the accuracy of data interpretation.
In the clinician’s guide elaborated by the Mental Health Evaluation & Community Consultation Unit it was estimated that 80% of the persons diagnosed with a psychotic disorder had their first episode between the ages of 16 and 30 years [6].
Power and Edwall, quoted by Apiquain in Schizophrenic Psychology (2006), have presented statistical data that showed that the majority of first psychotic episodes belong to schizophrenia or its spectrum [7].
The median age of persons having their first psychotic episode in schizophrenia was identified to be 19 years old, with the specification that females had a first psychotic episode 2 to 3 years later than males. Thorup (2007) has mentioned that the age of onset of the psychotic symptoms in females is later in life, as against males, fact that is found in this current study, without statistical significance [8]. The median age of the studied group (11-18 years) was of 15 years, with girls having an older age than the boys at the onset of the first psychotic episode.
Comparing the type of symptoms at onset, girls present more delusions and disorganized behavior than boys, in which hallucinations prevail. The difference is not statistically significant, result that is not in accordance with other studies, which report a higher presence of affective symptoms in females and more negative symptoms in males.
We remark the presence of comorbidities (psychiatric and somatic) in 53 patients (87%), 33% of them having psychiatric comorbidities. Sim (2004) has identified the presence of psychiatric comorbidities in 29 patients (36.7%), adding that these patients had an onset of symptoms at an early age [9]. In the study conducted by Strakowski (1993), quoted by Sim (2004), patients at the first psychotic episode had comorbidities in a proportion of 52% (n=53), and 37.7% (n=20) had multiple comorbidities; also, it was underlined that patients with psychiatric comorbidities had a precarious evolution of clinical symptoms, initially, as against those with somatic comorbidities [10].
In the NICE guidelines 2014 it was noted the fact that social anxiety (without being attributed to paranoia) and post-traumatic stress disorder can be identified in up to a third of the persons with psychosis and schizophrenia, being present during all the stages (prodrome, psychotic episode, recovery phase), and depression in 90% of patients. In our study group we have identified depression in 3% of patients and anxiety in 8% of them, which makes us hypothesis that the affective symptoms are eclipsed by the clearly psychotic ones [11].
The prodromal phase can be identified retrospectively, can last from 2 to 4 years, and the delay until pharmacological treatment initiation (DUP) can have a mean of two years and a median of 6 months [12].
Duration of untreated psychosis (DUP) has a great variability, from a few weeks to a few years, Kingston (2011) signaling a mean of 21.6 months for schizophrenia, 1.4 months for bipolar disorder and 1.7 months for severe depression with psychotic elements [13]. Comparing with a DUP of 19 days for the patients in the current study, we attribute the early presentation to the doctor and the initiation of the antipsychotic treatment to the fact that our study group is comprised of children and adolescents (11-18 years) and to the vigilance with which the caregivers have observed the change in the mental status of their child. We consider that a shorter prodrome (of 14.5 months) can be explained in the same way.

Conclusions:
The first psychotic episode is an opportunity for intervention. Studies show that persons at the first psychotic episode are more responsive to antipsychotic medication than those in subsequent psychotic episodes. If in the case of those with a high risk to develop psychosis (“at-risk mental state”), with a very high risk (“ultra-high risk”), or those that fit the criteria for attenuated psychosis (according to DSM 5), the main intervention is a psychosocial one, mainly systemic therapy [14], in the case of a psychotic episode it is imperative to quickly initiate a pharmacological treatment, because a long DUP is associated with a lower response to medication and a more reserved prognosis [15].
Taking into consideration that the precocious identification of psychosis’ prodromal phase and the signs and symptoms of the florid psychotic episode are key elements in the therapeutic decision and in the outline of its evolution, we consider that it is necessary to develop a unique instrument for evaluating risk factors, prodromal symptoms, manifestations of the acute episode and the response to treatment.

Acknowledgements:
The authors wish to thank dr. Imene Mrabet for her implication in the documentation process and dr. Teodora Panaitescu and dr. Mariana Mitroi for the help offered in collecting data regarding the variables used in the current study and associate professor dr. Viorel Lupu for his support in the development of the study.