To achieve that purpose, the conducted clinical trial based on neurological.

Manifestations in patients with various thyroid disorders we had the following objectives:

The evaluation of the frequency of neurological manifestations in thyroid disorders.

The identification of some specific clinical pictures in various thyroid disorders.

Revealing the difficulties of diagnosis regarding the nervous system disorders produced by thyroid pathologies.

The study group included 820 patients with thyroid pathologies. We examined neurologically 820 patients with thyroid diseases, admitted in the neurology and endocrinology wards from the Emergency Hospital “St. Andrew” Galati or that were under medical observation in the specialized clinic of the hospital in the neurology and endocrinology sections. The study was conducted over a period of 5 years.

3.1. Clinical and laboratory characteristics of the study group regarding terms of neurology and endocrinology.

Patients from the study group were examined clinically and paraclinically every 3 months. 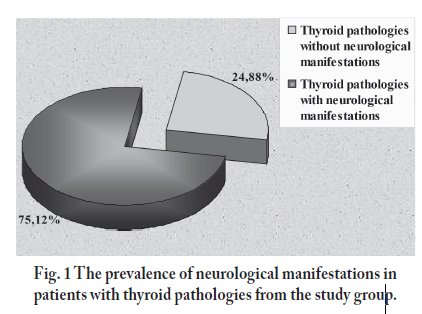 The research followed the recommended methodology for realizing the clinical and epidemiological studies.

Clinical examination was correlated with laboratory tests. Laboratory data (recommended, most of the time pursued and partially performed) was recorded in the observations charts of the departments and offices mentioned.

Sections and also from the sheets of neurological and endocrinological medical supervision.

The clinical trial was conducted with the consent of the investigated patients and had the approval of the Bioethics Commission of the Emergency Hospital Galati.

For the clinical diagnosis of hyperthyroidism we used the Newcastle index.

In the clinical evaluation of hypothyroidism we followed the Billewicz index.

Of the total patients in the study:

The structure of the study group – by gender:

We noticed the particularly high frequency of cases in women, 94.48%, compared to males, 5.52%, (p<0.001), both in number of cases of thyroid diseases as well as in number of thyroid pathologies with neurological damage.

Main morbid associations in patients from the study group included:

– Diabetes type I and II;

– Profound thrombophlebitis of the lower limbs;

Neurological manifestations in patients with thyroid pathologies occurred slowly in a large number of cases, fact cited in the literature [1].

In most cases, neurological manifestations were installed progressively, fact confirmed by other studies [2].

The high frequency of clinical neurological manifestations in the study group both in the moment of admission as well as during their evolution imposed further research to establish their etiology.

The study highlights the clinical and epidemiological aspects regarding the neurological manifestations in thyroid diseases with the following conclusions:

75.12% of the patients with thyroid disorders followed for 5 years presented neuropsychiatric manifestations, fact cited in the literature [3];

Thyroid diseases and neurological suffering imply either common etiology or a relationship based on cause and effect;

The thyroid conditions are more frequent in women 94.48% than in men 5.52% and the neuropsychiatric manifestations are as well more common in women [4].

Neurological manifestations generally occurred progressively in the majority of the cases, rarely acute;

Neurological damage occurred lately in the patients known with thyroid disorders but in a greater number of cases the neurological affection was revealing for detecting the primary thyroid condition;

Remission of neurological signs and symptoms under the basic treatment of thyroid disorders was generally obvious;

A definite conclusion of the study is that very often patients with different types of thyroid disorders present themselves initially in the neurology ward due to the fact that the thyroid symptoms can often be confused with a neurological disease, fact citated in other studies [5].

Psychiatric manifestations are extremely common in these cases from mild to severe such as schizophrenia, paranoia etc. Patients are often wrongly labeled and initially treated in psychiatric wards for mental diseases when in reality the symptoms are caused by thyrotoxicosis.

Headache and vertigo were often encountered, sometimes requiring, because of their resistance to treatment, a brain CT.

Syncope and fainting episodes were also frequent in patients with hyperthyroidism, being a reason for which a large number of patients presented themselves in the neurology service.

Ischemic stroke was less common in patients with hyperthyroidism and more common in those with hypothyroidism from the study group, in the cases of thyrotoxicosis this occurred in patients with heart rhythm disorders caused by dysthyroidism who also presented other risk factors. In the followed patients, 40% of the cases with toxic thyroid adenoma developed a stroke during their evolution.

Seizures associated with hyperthyroidism, although probably with no endocrinopathy causal relationship were reduced after associating anticonvulsant therapy with antithyroid synthesis treatment.

Muscular manifestations occurred in patients with old hyperthyroidism which was generally therapeutically neglected.

These included common accuses such as muscle weakness, muscle cramps, myalgia which were reduced by treatment with antithyroid synthesis drugs.

Chronic thyrotoxic myopathy occurred exclusively in women, other studies indicating that it occurs mainly in men with hyperthyroidism.

Chronic muscular affection particularly affected the pelvic muscles, muscle enzymes were within normal limits (CPK) and the muscle biopsy was nonspecific. The electromyography confirmed the diagnosis. This data is confirmed by other studies.

Ocular myopathy was present in a small number of cases, it was either unilateral or bilateral, its improvement being hardly noticeable during the treatment.

Forms of unilateral exophthalmos, especially those associated with training headache in patients that weren’t know with hyperthyroidism, imposed a differential diagnosis and had confusions with intracranial expansive processes. Neuroimaging investigations, preferably brain MRIs were indispensible in establishing the diagnosis. Diplopia as a first sign of hyperthyroidism or preceding with months or even years the thyrotoxicosis, imposed the differential diagnosis with ocular form of myasthenia gravis.

Sensory and sensorymotor type neuropathies, through vascular lesions caused by hypoxia, lipid and protein metabolism disorders, were rarely encountered in patients with hyperthyroidism, the evolution being slow and favorable during the treatment with antithyroid synthesis drugs, data which was confirmed in other studies[6].

In the study group we have not encountered any cases of myasthenia gravis or periodic hypokalemia paresthesia associated with hyperthyroidism, although these associations are frequently cited in other studies.

A special mention that we make is for the TSH secreting pituitary adenoma with secondary hyperthyroidism which brings together the clinical signs of thyrotoxicosis, without infiltrative ophthalmopathy with headache and/ or focal neurological signs, depending on the evolutionary stage. Paraclinically we detect increases of thyroid hormones and TSH, the clinical suspicion requiring neuroimaging confirmation, preferably MRI.

Psychiatric manifestations encountered in the studied patients with hypothyroidism included forms ranging from mild to severe, which created a confusion during the diagnosis. They have reduced after the initiation of the substitute thyroid hormones treatment.

Training headaches and vertigo syndromes associated with hypothyroidism, resistant to the treatment for the symptoms, sometimes imposed neuroimaging investigations such as CT or MRI, which detected brain and cerebellar atrophies.

Ischemic stroke was commonly encountered in patients with hypothyroidism (more frequently than in those with hyperthyroidism), such as arterial stenosis, which were confirmed through Doppler examinations, possibly caused by the dyslipidemia which was determined by the hypofunction of the thyroid. The thyroid hormone therapy reduced the symptoms of pseudobulbar type seen in patients from the study group.

Epileptic seizures associated with hypothyroidism, although probably with no causal relationship with dysthyroidism, had their frequency reduced when combining anticonvulsant treatment with thyroid hormone replacement therapy.

Myxedematous coma presented a problem of differential diagnosis for the neurologist, in the study group all the patients with this type of suffering

initially presenting themselves in the neurology ward. A comatose condition, hypothermia to which no known etiology requires urgent endocrinological investigations.

Muscular manifestations were influenced more by the duration of the hypothyroidism state than by its severity. They included:

Myopathies were encountered exclusively in women, in chronic forms, predominantly affecting the scapulohumeral and pelvic belts. They were associated with high values of CPK and muscle biopsy was nonspecific. Clinical improvement was obvious under treatment with antithyroid hormones after only a few months from its initiation.

Among the cranial nerves, the most affected in hypothyroidism were the acoustic- vestibular nerve and the facial nerve, this one being probably affected by entrapment type phenomena.

In post-surgical thyroidectomy hypothyroidism (not through radioactive iodine), there were cases of recurrent nerve palsy through faulty surgical techniques.

Myasthenia gravis was associated with hypothyroidism in the study group, although in other studies it is characteristic of it to associate with hyperthyroidism. It is possible that some cases of hypothyroidism to have been caused by previous autoimmune types of thyroiditis, whose damage may have caused the hypofunction of the thyroid and to which the autoimmune mechanism may be the same with the one that causes myasthenia gravis.

Entrapment neuropathies targeted specifically the median nerve, their evolution being favorable under treatment.

Sensory and motor pseudo myopathy neuropathies were relatively common in patients with hypothyroidism. They have improved slowly, clinically and regarding the electrophysiological parameters during hormone replacement therapy.

We noted an increased association of various forms of hypothyroidism with tumors with various localizations, as well as diabetes, data which was quoted in other studies.

In benign tumors and thyroid cancers:

Benign thyroid tumors are not accompanied by typical neurological symptoms.

Persistent accuses such as headache, vertigo, balance disorders imposed the performing of a brain CT or an MRI, which detected brain metastasis, lacunar strokes, generalized cortical atrophies or which confirmed an ischemic stroke.

We detected cases with brain metastasis without other metastasis in other organs.

Compression phenomena of the cervical sympathetic chain and of the mediastinum structures were rarely encountered in patients from the study group.

Thyroid cancer was associated in some cases with cancers with other sites: meningioma, cervix cancer.

In acute and subacute thyroiditis there were no typical neurological symptoms, we have predominantly seen headaches, vertigo, myalgia, physical asthenia which were not clinically objectified.

In affections determined by iodine deficiency:

Euthyroid goiter it was not associated with any characteristic neurological changes, accuses such as headache, vertigo, acroparesthesia improving under treatment with potassium iodide.

Cases of bulky cervical goiter or endothoracic goiter led to compressive phenomena of the mediastinum structures and of the cervical nerve-vascular package, the diagnosis of the thyroid pathology being established, in some cases, in the neurology ward.

Adult patients with iodine deficiency during their childhood have presented mental retardation, dysarthria, epilepsy with generalized convulsive seizures, hearing loss, data which was confirmed in other studies.

Neurological manifestations determined by hyperthyroidism and especially by hypothyroidism can occur through iatrogenic causes, mainly due to prolonged treatment with Cordarone, which is an antiarrhythmic drug commonly used as chronic treatment in cardiology.

In thyroid pathologies in elders:

The clinical trial has revealed the following aspects:

The general practitioner must form a multidisciplinary medical team with the neurologist and endocrinologist, in order to early diagnose the patients with various thyroid pathologies and secondaryneuropsychiatric sufferings.

Thyroid affection must be considered in cases of neuropsychiatric signs and symptoms of uncertain etiology. Therefore, we consider this clinical study very useful for the neurologist, endocrinologist, psychiatrist, neurosurgeon, cardiologist but also for the decision making in public health assistance.

The present study may find its utility in supporting the prevention programs for thyroid pathologies (which, evolving, may be complicated by neuropsychiatric manifestations), and it may benefit directly the patient but also the doctors.