SUMMARY
This is a case study regarding a child with autism who has been monitored and assessed since his biological age of 3, untill now, when his biological age is
17. The pupil is currently attending the 9th grade at a Technological High School.
The article presents the psycho – pedagogical notes together with annexed charts dating from kinder garden and primary school.
Keywords: autism, therapy, child

Anamnestic data
Boy of 3 years and a half, diagnosed with early infant autism, severe form, according to DSM – 5 [1].
– Family structure: 3 members, being the only child. The family members have never suffered from chronic diseases or other disabilities. Language disorders have never been present in the family.
– Family relationships: it is a family with strong ties, protective, concerned with the child, affective, which succeeded in overcoming the denial and self guilt phases.
Mother will be directly involved in the therapy, whereas the father, after 8 months of participating, is more involved in the family solving problems, in order to give mother the chance the spend more time with the child.
– Good social-economic status in the city, both parents university graduates.
– Full – term pregnancy, weigh: 3800 gr and Apgar: 9, C-section birth.
Information on hearing and language:
 Baby talk – at around 6 months.
 Language progress – canonic lallation, at 8 months
– first word: after 1 year, mother, and afterwards: water, father, syllables. Slowly, the words transformed into sharp sounds.
Somatic and functional examination
Somatic aspect – no malformation of the head
Examination of the phone-articulating system:
– lips – intact
– longue – normal size
– teeth – normal
– palate – normal
– motility: insufficiently developed
– hearing acuity: normal, E.N.T. examination
– hearing: insufficiently developed
– voice tonality: high
– respiration type: mouth
– general motricity: deficient
– time – space orientation
Speech Therapy Diagnosis: delay in language development, early sign of autism.
The therapy program is complemented every two months with Lithiu Carbonate, Clopixol and Biocebral. The answer appeared after 9 month of therapy.The family members take part to the program, in the morning. At noon, the boy takes a nap and in the afternoon, the parents start again practicing the exercises. The therapy is applied together with the routine regarding fine motion development.
After 4 months, the boy improved the coloring activity. He is happy if the image is smaller or if there is only one element on the paper. Before, he used to get upset and refuse color pencils, hitting the table with his hand and screaming.
For instance, he received a paper with fruits, vegetables, animals and birds. When he had to color an apple, he had an apple in front of him, on the table. After two months, he agreed to color two apples while there was a green and a red apple on the table. First, he was told how to solve the exercise, pointing out the instruction also: “I say one, you say many”; “I say one apple and you say many apples”. The whole time, the parents’ role was decisive. They used materials with graphic signs from different books [2, 3].
Enrichment and usage of active – passive vocabulary was a psychological obstacle for the boy. Several materials were used: Lego, small cars of different colors and sizes, train, plain. Different games were created in order to involve parents in the therapy. After imitating the typical sound of a car/ plain/ train we worked with different commends for space orientation: we put the car on the table, under the table. The space orientation exercises lasted 3 – 4 months until they were practiced properly.
By using the geometry shapes of LOGI II, the boy could learn the shapes and draw using them in his first drawings. Below, you can see one made by him after 6 months of therapy and after overcoming several failed attempts.
After graphic signs: horizontal line, vertical line, skew line, hook, sticks, chain mail, circle, square, rectangle, oval, opened curved line, spiral, twisted line, loop, little bridge, they passed to number writing specific to age 5 – 6 years. Once the names and their writing technique, they first used the points and then the little squares, typical to the chart used in the kinder garden. Afterwards they used the Math note book.
The affection and the emotion attitudes are mostly orientated towards mother. Father’s presence is rarer, only for certain relaxing activities. The sexual component is maintained under control by regular tests run by the endocrinologist.
CONCLUSIONS:
Charts 1 and 2 show he understood the geometry shapes at the biological age of 6 years and 2 months. A particular interest was raised by his esthetic and artistic contribution brought to completing and combining the geometry shapes. When he was asked “What can we draw by using a circle? Or vertical and skew line?” he answered by drawing a sun and a child.
Charts 3, 4 and 5 made at 6 years and 9 months were combined, at the request of the speech therapist and of the teacher: geometry shapes with graphic signs. They were the assessing forms of the final year in the kinder garden.
Charts 6 and 7 were made in the 1st grade at school, at the biological age of 8 years and 9 months. The boy attended the primary school and currently is finishing the secondary school accompanied by mother.
The emotional support offered by her together with her incentives made him easier to absorb information and pass the training – educational objectives.
Currently, the boy is under drug treatment: CLOPIXOL, PURE DHA, LECITHIN 120 mg SCOM KAL, TONOTIL.
From time to time, he experiences hand tensions. Due to heavy schedule, 5 – 6 hours a day, he bites his left hand, as a stereotype. 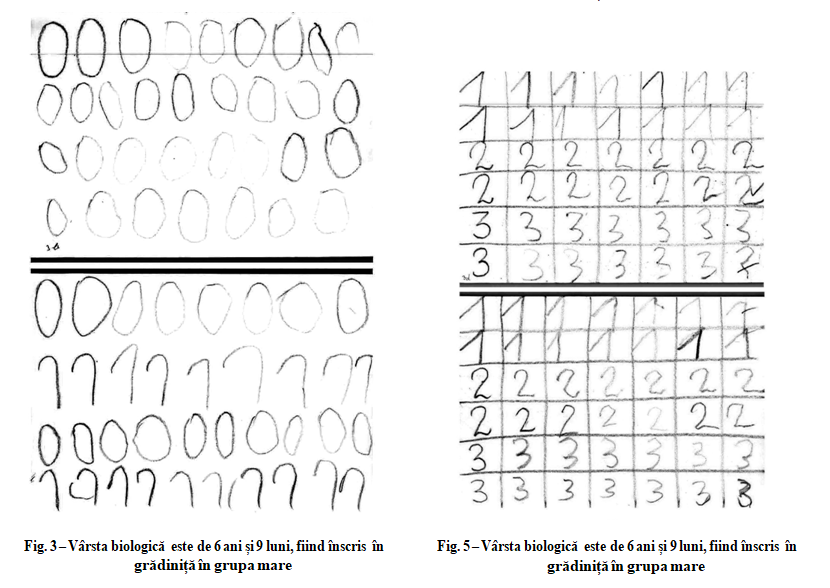 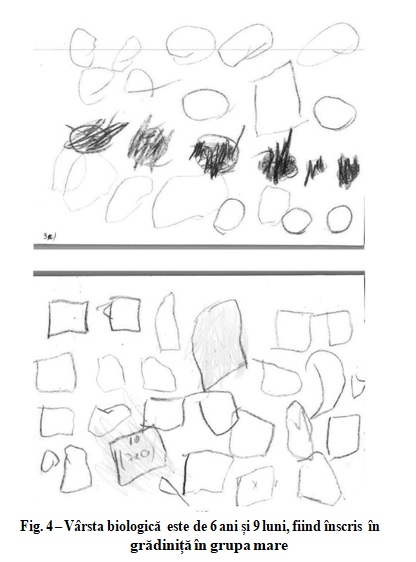 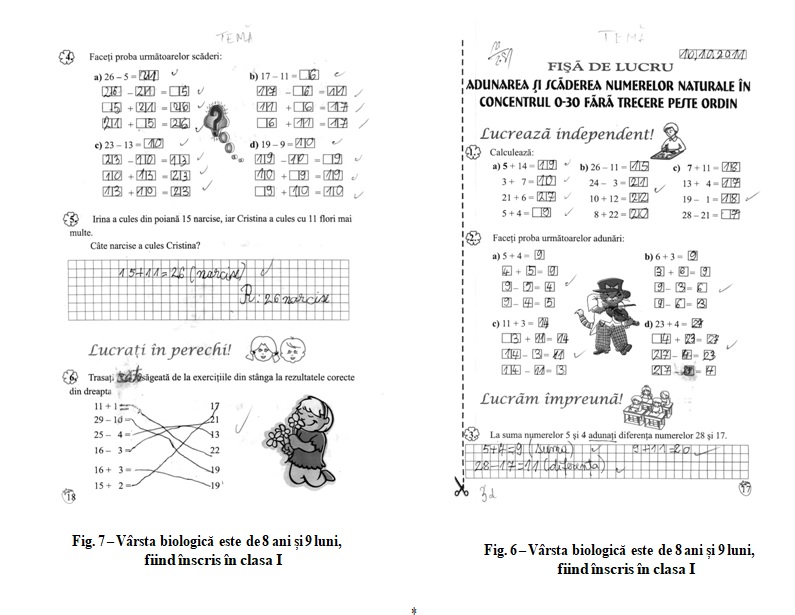