Due to multiple social implications juvenile delinquency represents an important and current subject of research in child and adolescent psychiatry.

We conducted a clinical trial design, analytical and observational, directed towards a well defined category of patients: adolescents with delinquent behavior.

The main objective was to identify the personality disorders occurring more frequently in delinquent teens.

The secondary objective was to identify the predictors for recurrent conduct disorders.

Participants. We used a sample of 31 adolescents with ages between 14-18 undergoing forensic examination during 2011 in the Child and Adolescent Psychiatry Clinic from Cluj-Napoca.

Inclusion criteria: male or female with ages between 14-18 diagnosed with conduct disorder (CD), according to international criteria DSM IV-RT and ICD-10; the teenagers and caregivers agreed to participate in the clinical trial after they have been explained to and understood the purpose and clinical protocol.

Exclusion criteria: adolescent diagnosed with a mental retardation form, teenagers with insufficient knowledge of Romanian language, adolescent refusal to participate in the study.

To establish other risk factors we used a set of questions regarding the area of origin, socioeconomic status, education level, family, consumption of toxic substances, belonging to certain social groups, family history. To assess intellectual coefficient we used The Raven Progressive Matrices.

Data analysis. Data was entered into an SPSS database. For data analysis we used SPSS statistical package (version 17). Initially we performed a descriptive statistical data to define the general characteristics of the sample. To identify significant associations between variables we used bivariate statistical analysis (Chi-square, t test for independent samples) and to analyze the independent contribution of each PD to the appearance of the Childhood CD/Adolescent CD we used a linear multiple regression analysis.

Table I. General characteristics of the sample 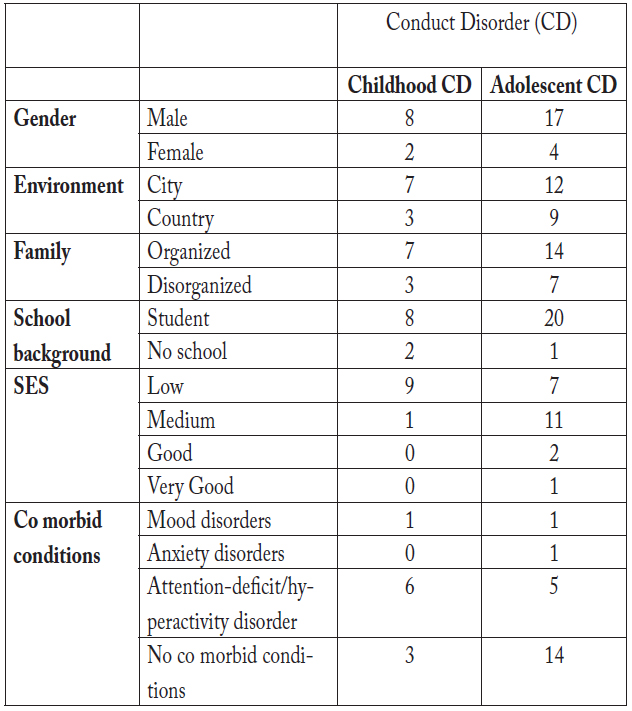 CD incidence increases from childhood to adolescence. In the sample there was a net predominance of male subjects. According to literature data, the prevalence of CD is more common in boys. Usually children with antisocial behavior come from families with poor SES: low income, parents without a job, welfare dependence, state-subsidized housing (1). Pittsburgh Youth Study described a significant correlation between school performance and conduct disorders (2). There are meta-analyses that support the association between ADHD (3), impulsivity (4) and delinquency. The Developmental Trends Study, from U.S.A. has shown that ADHD predicts the appearance of ODD which in turn predicts the appearance of CD (5).

A number of 17 patients of the 31 taken in the study met simultaneously the DSM IV criteria for CD and PD, the most frequent personality disorders found among delinquent teens were abnormal personalities of cluster B (antisocial, borderline, narcissistic) (table III).

Table II. The relationship between PD and CD

According to DSM IV the diagnosis of personality disorder can be established under the age of 18 if the behavior pattern has lasted at least 1 year. An exception to this rule is the antisocial personality disorder, whose diagnosis can be established only after the age of 18. In the present study adolescents who met all criteria for APD except for age-related criterion were treated statistically as they had APD. 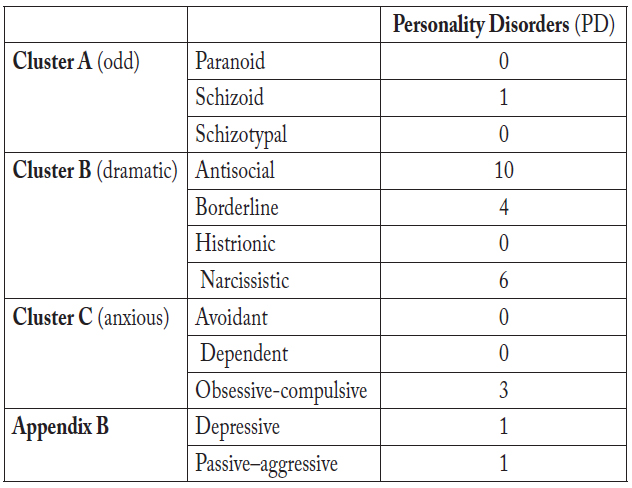 To analyze the independent contribution of each PD in explaining the appearance of CD we used a multiple linear regression analysis where PD were introduced as predictors for CD, who was treated as criterion variable. Data analysis revealed that personality disorders are not predictors of conduct disorder (beta = 0.04-0.37, p>0.05).