SUMMARY
This paper presents the case of a 21-year-old theologist suff ering from marked anxiety, which was treated, initially, with medication (Fluoxetine and Alprazolam) and a technique to control breathing – breathing in three steps, and afterwards by applying rational emotive behavior therapy (REBT) techniques augmented with religious elements. Adequate examples, especially in disputing irrational cognitions, were essential for the success of the therapy. Passages from the Bible and examples from Jesus Christ’s life were used. In the same time, we bring arguments for a correct evaluation before initializing REBT with religious elements by the therapist, who needs to know the content and the defi ning lines of diff erent religious cults, in order to decrease the risk of a therapeutic failure. By adapting the intervention in this way, we favour the therapeutic relationship, which is essential for a successful therapy. Key words: rational emotive behaviour therapy, religion, anxiety

We present the most important moments of the session (T: therapist, A: Antony):
“T: What determined you to come back to my office?
A: The same anxiety state I’ve told you before, that appears in the Jesuit community, when I am observed by others, especially by my superiors. I feel dizzy, I have palpitations, a lack of air and an undefined bad feeling. I think that I cannot meet the expectations of my superiors and my other colleagues.
T: Your problem is not mainly caused by your superiors’ expectations, but by the way you interpret situations.
A: I think you are right! I often thought about it, but I wasn’t sure if these worries are my “own imaginary constructs”.
T: It is good to realize what your own interpretations are concerning reality. I understood that you are a Philosophy student. I suppose you have studied about stoics and epicureans. As we both know, they sustain that things per se are not important, but our interpretations of them.
A: That is correct!
T: Starting from what these wise men said, a very simple and efficient mean of therapy was created by an American psychotherapist, Albert Ellis, the ABC model. We note with A all the events, situations, thoughts or imaginary elements that we suppose produce our suffering or make us feel disagreeable. We will take as an example what you have told me before. At A (situation), I’ve noted the moments where you are in the Jesuit community, especially in the presence of your superiors, that can observe you. At C (emotional consequences) I’ve noted the anxiety you were talking about, and which you thought, up until now, that it was a consequence of A. At B (interpretation) I’ve noted what you told me you are thinking in those moments: that you cannot raise to the level of your superiors’ expectations and, as a consequence, you will not be appreciated by them (table 1). T: This relatively simple model shows how not A determines C, but rather B determines C, otherwise said: not the fact that you are in the presence of your superiors and your colleagues, who can observe your behavior, induces anxiety, but the way in which you think “it is terrible” that you are not able to rise to their expectations and that you MUST, at any cost, be appreciated all the time. You have told me the same thing, but that you had some doubts about the correctitude of your interpretation. 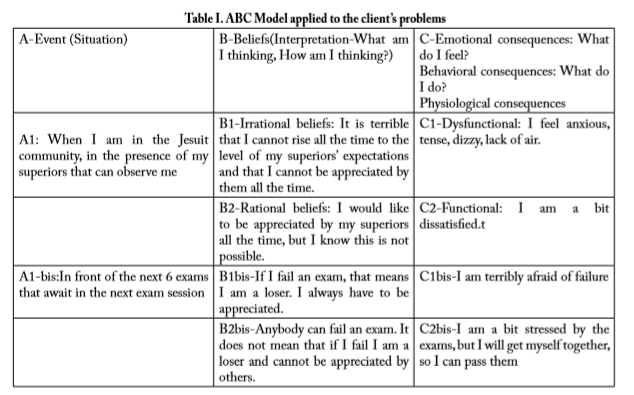 You interpreted that “it is terrible” that you cannot rise all the time to the level of your superiors’ expectations and that “I will not be appreciated by them because I HAVE TO BE APPRECIATED BY OTHERS permanently”. You said that you are part of the Catholic Order of the Jesuits, which is also called: “Jesus’ Society”. Was our lord Jesus Christ appreciated by everybody all the time? Although he was Man – God and He did only good deeds on this Earth, He was betrayed by one of His closest disciples, Judas, the Iscariot, and by the people that acclaimed Him not long before, when He entered Jerusalem. Despite all this, Jesus said: “Father, forgive them, because they know not what they do.” No one is above our lord Jesus Christ! So, we cannot pretend for everybody to appreciate us!
A: Yes, I agree!
T: How would you feel if you reformulated it like this: I would like to be appreciated by my superiors all the time, but I know this is not possible?
A: I would be dissatisfied and a little worried, but not anxious.
T: Let’s analyze another problem you are dealing with.
A: The exam session is around the corner with six hard exams and I am afraid that I will not pass one of them. If I fail, that means I am a loser and I am not worthy of people’s appreciation.
T: Let’s apply the ABC model in this situation. What would the A be?
A: The upcoming exams. T: Ok, and the C? A: I have a terrible fear of failure. T: Ok, and the B? A: If I fail an exam, I am a loser and the others will not appreciate me!
T: In other words, THEY HAVE TO APPRECIATE ME! Do you think it is okay to judge ourselves globally according to just one less performant behavior or just for one failure? Let’s take an example of an irrational way of thinking connected to a hurried generalization about a regrettable action. Let’s take Saint Peter as an example! On whose foundation, Jesus Christ built the entire Church, he is considered the First Pope! As we all know, the night Jesus was sold for 30 pieces of silver in the Gethsemane garden by Judas, Peter betrayed Him three times by denying Him. If we were to think like you do, that would mean Peter is a traitor and a coward, that cannot be trusted and doesn’t deserve appreciation from others. Despite all of this, Jesus did not think like this, and invested Peter with such an important role. In the same way, Peter recognized his weakness with humility, continuing God’s work at Jesus’ urge: “But take heart! I have overcome the world!”.
A: Extraordinary! It is the exact theme of today’s lecture in our community!
T: So, it is not correct to consider ourselves losers for a failure. Life is a struggle, being filled with asperities and obstacles that we can sometimes overcome or not. On the other hand, Jesus has taught us to wear our cross with dignity. How could you think rationally about your exams? A: Anyone can fail an exam, but this does not automatically mean that he is a loser. On the other hand, you cannot be appreciated all the time by everybody. The Bible also says: “no one is a prophet in his own land”.
T: It is a very good wording! And how do you feel now, if you think differently? A: I think I am only a little bit stressed by the exams, but this will motivate me to be better prepared to pass them!
T: I would suggest keeping a diary where you can write daily in the next table, as a homework. (table 2) The evolution of the case was favorable due to cognitive restructuring using REBT with religious elements, adequate to the client’s religion

Similar results were obtained by Koening et al. (2015) and Pearce et al. (2016), who compared intervention with CBT with religious elements vs. standard CBT in major depression and in somatic disorders, demonstrating the superiority of the first one [11,12]. Out of the 10 irrational ideas enumerated by Ellis and Harper in the paper titled: “A new guide for a rational living” (2007), the client whose case has been described above had the most important one, that is: “I have to be loved and approved by all the persons that I consider significant”. Most people enjoy affection and approval, and it is good to have them, but you can live without them. People can hurt themselves by following the impossible ideal to be loved by everybody and by being constrained to live by other people’s standards, dominated by the imperatives of:
Must, Should, Ought. Also, the client presented another irrational idea: “I must not fail”, believing that he permanently has to prove maximum competency and according results. In fact, no human being is capable to realize everything he proposes to do. Our client also “catastrophized”, foreseeing his failure in the exam that generated anxiety.
CONCLUSIONS Applying REBT techniques augmented with religious elements were beneficial in treating a him. Adequate examples, especially when disputing irrational beliefs, are essential for the success of therapy. By adapting the intervention in this way, we favour the therapeutic relationship, which is essential for a successful therapy.