SUMMARY
This study is in fact a fragment excerpted from the doctoral thesis „A study of the Mental Disorders in Children and Youth” defended by Mr. Constantin Lupu, psychiatrist, at „Carol Davila” University of Medicine and Pharmachy of Bucharest in 1996. From December 28th 1989 to December 31st 1990, a number of 487 children and adolescents diagnosed with psychopathological disorders caused by the aggressions that characterized the Revolution itself and the following post-revolution days, when information on the death toll and numerous disappearances where made avalaible to the wide public, has been entered in the medical records. It also worth mentioning that 62 small children, who had been accompanying their parents at the manifestations, called for child psychiatric assistance, while the adolecents and young people, required specialized assistance, had taken part to the demonstrations in small groups of similar ages. From the 29 subjects admitted to hospital trough the psychiatric emergency room, 5 girls have been brought to the ER in agitated, psychotic states, with delirious ideas, visual or auditory hallucinations, requiring intensive treatment and therapy. Others 6 boys and 2 girls have been treated at home. Key words: psychopathological, revolution, december 1989, children, youngs

The participation of adolescents and children in the Timisoara Revolution between December 16 -28, 1989 was a mass phenomenon [1]. The numerous participation of this category in demonstrations and the exposure to aggression during reprisals (arrests, ill-treatment, injuries, killings) was reflected in its being named in certain documents as the “Youth Revolution”. Due to the evolution of the events, the peaceful demonstrations and demands were followed by brutal aggressions and crimes, which classified the situation in that of a civil war, with catastrophic character and consequences among the population.
The inventory of stressors and symptoms recalled by children and young people during and after participating in the Revolution is very intricate. The classification of these situations was somehow favoured by the new ICD 10 codes (International Classification of Diseases – (WHO) Classification and DSM), but we cannot say that all possible psychopathological conditions were registered for this category of participants in acute situations from the anthropic catastrophe studied by us [2].
The fact that doctors, paramedics, young people and children used the services of the child and adolescent neuropsychiatry department, as well as other medical offices, for psychopathological situations triggered during the repression against the participants, shows that the respective mental manifestations were of maximum intensity, and some had emergency character. The demonstrations began on December 16th, 1989, and the reprisals on December 17th, the ill-treatment increased, followed by an armed massacre – starting with the night of December 22nd and continuing until December 26th, 1989 [3]. The first consultations and admissions to the Timisoara Clinic of Child and Adolescent Neuropsychiatry of the youth with acute stress (shock) states are recorded on December 28th, 1989, after which there was an ascent of the calls to our service all January 1990. For some clarifications we were called to other pediatrics departments in the city, but our opinions were also requested by telephone in some cases that called for paediatric or general practitioners.
Thus, between December 28, 1989 and December 31, 1990, 487 children and adolescents with psychopathological disorders due to the aggressions during the Revolution and the following days when news on the deaths or disappearances during those the days of repression were recorded [1]. It is possible that, according to different and approximate estimates, during the 12 “hot” days of the December 1989 Revolution, between 9,000 and 12,000 young people and children participated in these events. We note that paediatric consultations were also required for 62 young children who accompanied their parents to the protests, but that the other teenagers and young people who came to us participated with their age groups (from the same schools or neighbourhoods). 35 children and adolescents with mental disabilities, also came to us for consultation; they had left the boarding schools, support schools and their families to attend demonstrations, where they were exposed to and witnessed aggression that caused acute stress. Of the 29 subjects admitted in emergencies, 5 girls were detained in a psychotic state and with delusional ideas, visual and auditory hallucinations and a state of agitation, requiring intensive treatments. Another 6 boys and 2 girls were treated at home. We emphasize that they were not psychotic in evidence, did not evolve into chronic psychosis and were not under the influence of toxic substances. These cases required hospitalizations between 3 to7 days. Of the 24 hospitalized with acute stress reactions, boys predominate (sex ratio 17/7), requiring between 2 to 28 days of hospitalization. The difference between the boys taken up or hospitalized and girls is explained by the greater participation of the first category in the demonstrations. The most prolonged hospitalizations required girls with depressive states, obsessivecompulsive disorders and psychosomatic syndromes in the chronic disorders of PTSD (Post-traumatic Stress Syndrome) and co-morbid conditions [1].
I would like to detail this aspect, which I consider important, regarding the stress reactions during and after the Revolution, which is shown in the table I. 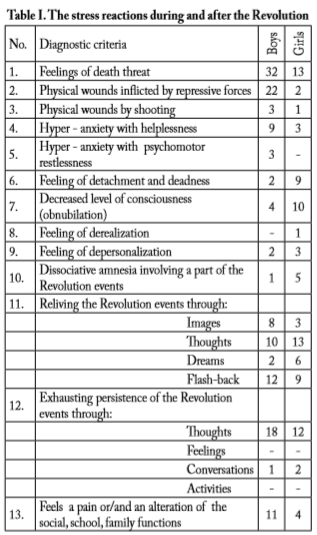 According to the list of stress causing agents, in the Timisoara Revolution – December 1989, two categories of victims of the catastrophic situations were selected: those who directly suffered the traumas (arrests, detention, assaults, shootings, those who were present at the death by shooting) and those who were witnesses or participated in the reconstruction of some situations (exhumation of the dead, funerals, memorial rituals, participation in post-revolutionary law suits or meetings), with the relapse into certain psycho-traumatic situations. Following the symptoms of PTSD, we chose a group of 50 children and adolescents, of which 25 girls and 25 boys, who attended more than 6 consultations between January 1990 and December 1991, according to the data on the Mental Health Lab records of children – adolescents. From the protocols of the psychological examinations and from the observation sheets of the interned subjects, we selected the list of the most prevalent symptoms in those who have suffered psychological problems during and after the December 1989 Revolution in Timisoara. Of the 50 subjects taken into consideration, we note that PTSD symptomatology started, in 22 cases, in the first month after the Revolution, in 12 cases in the next 3 months, and in the other 16 children and young people such symptoms appeared in the period from May 1990 to December 1990. In the whole group of 487 children and adolescents identified with the diagnosis of PTSD, the presence at the consultations were not orderly, some of the patients left Timisoara, others surpassed the age of 18, therefore the information became scarce during the following 5 years. In 1996, we were able to review a number of 71 subjects out of the initial 487 identified with acute shock states and PTSD after the Timișoara- December 1989 Revolution. The analysis shows that in 1991, 1992 and 1993, to specialized mental health centres, most children and young people came with symptoms that disturbed them, and in 1994-1996 their number gradually decreased. Specifically, of the group of 487 subjects, in 1992, 144 children and young people were consulted, in 1993: 106, in 1994: 89, in 1995: 82 and in 1996: 71. These consultations were used to carry out a semi-structured interview, comparing initially stated symptoms with updated PTSD criteria [1]. 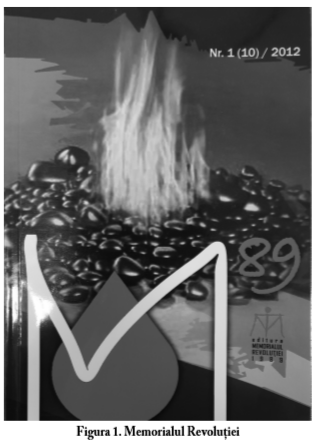 The highest frequency of co-morbid symptoms is held by anxiety-phobic states, somatoform and conversion disorders, but these symptoms recede into evolution, are attenuated, and the number of calls to the psychiatrist decreases as well. We have data on the development and growth of adaptive disorders, of decreased school performance, therefore of personality changes. From our group we have identified in 1996- 21 such young people who can support the aetiology of the shock of December 1989 and of its consequences [4].