SUMMARY
Relevance of the study: Seizures are some of the most common pediatric problems, requiring the patient to be addressed to medical emergency services, and often intensive treatment. During a seizure the bioelectric activity of the brain is disturbed, developing a transient process determined by an abnormal, excessive or synchronous electrical activity, which can lead to changes in consciousness, behavior and/or abnormal movements, usually with sudden onset and end, of short duration, from seconds to minutes, which are detected using electroencephalography, i. e., EEG. Convulsions frighten parents and caregivers; however, most can be controlled with antiepileptic drugs. Th e recognition of epileptic seizures and early therapeutic intervention is essential for the prevention of complications. Scope of the study consists in presenting the National clinical protocol on the convulsions in the child, developed on the basis of international guidelines and assessment of the type of seizures, in accordance with the modern classifi cation of these nosological entities. Methodology of the study: Th e study was based on review of literature, protocols and inernational guidelines. A retrospective analysis medical records of 211 children’s aged from 28 days to 5 years, suspected for epileptic seizures, was carried out to determine the type of the seizure, conform to classifi cation of epileptic seizures, ILAE 2017. Additional examinations are neurological tests, electroencephalographic investigation, i. e., EEG, cerebral imaging, and genetic analysis. Were used methods of statistical processing, i. e., t-criterion Student and confi dence interval evaluation 95CI. Results: Th e results of the study allowed to identify the type of seizure. Th e focal seizures – 120 cases (56,9%; 95CI 53,49-60,31) prevailed over generalized seizures – 56 cases 26,5%; 95CI 23,46-29,54). Also, were determined seizures with unknown type – 24 cases 11,4%; 95CI 9,21-13,59) and unclassifi able seizures – 11 cases (5,2; 95CI 3,67-6,73). Among the seizures prevailed the tonic-clonic seizures – 72 (34,1%; 95CI 30,84-37,36), followed with the tonic seizures – 29 (13,7%; 95CI 11,33-16,07), myoclonic seizures – 17 (8,1%; 95CI 6,23-9,97), epileptic spasms – 10 (4,7%; 95CI 3,24-6,16), clonic seizures – 7 (3,3%; 95CI 2,07-4,53), etc., in descending order, most of the phenomena were encountered. It is not ruled out that in some cases the focal or generalized onset of the crisis was missed, for which reason the unknown or unclassifi able type was confi rmed. Th e results of the EEG changes characterized the type of crisis, but in some cases the type of seizures remained unknown. Imaging and genetic examinations have facilitated confi rmation of some causes of epileptic seizures, especially with structural changes (58 cases, 27,5%; 95CI 24,43-30,57). Genetic pathologies were found only in 5 cases (2,4%; 95CI 1,36-3,44). However, part of the causes of seizures remained unknown (15,6%; 95CI 13,1-,18,1). Seizures were addressed from a therapeutic point of view based on the clinical protocol developed and the present therapeutic algorithm. Conclusion: Th e approach of a child with seizures is based on 6 criteria: Recognizing the epileptic nature of a seizure; Correct therapeutic guidance of the patient during the seizure; Identifi cation of the causes of the seizure; Adherence to the therapeutic principles with anticonvulsant pharmaceuticals; Surveillance of the patient after the seizure; Ensuring of psychological support to the child and family. Th e classifi cation developed for the recognition and diff erentiation of seizures is useful and covers most of the available variants. Further examinations using EEG and cerebral MRI help to identify the type of seizure. Th e recognition of epileptic seizures and early therapeutic approach is essential for the prevention of complications. Timely relief helps to improve the patient’s prognosis. Keywords: convulsions, epileptic, electroencephalography, management, treatment.

THE RELEVANCE OF THE STUDY
Epileptic seizures are the most common neurological manifestations encountered in the child. From 4% to 10% of children experience at least one convulsive crisis during the first 16 years of life [1]. The prevalence of epilepsy among the pediatric population is 4-6 cases/1000 children [2]. The highest incidence is encountered in children under 3 years of age [3], mostly between age 1 and 12 months – 145.8 to 100000 population [4]. Convulsion is a general term that is often used to describe uncontrolled muscle contractions, however, the epileptic seizure refers to an electrical disturbance of the brain. In general, convulsion occurs when the muscles of a person are contracted uncontrolled with duration from seconds to minutes, with the involvement of the whole body, or a certain part of the body [5]. There are several conditions that can cause seizures, including fever, cranio-cerebral trauma, central nervous system (CNS) infections, strokes, epilepsy, etc. Convulsions appear due to bioelectrical disorders of the brain, which determines the occurrence of a transient phenomenon, determined by an abnormal, excessive or synchronous electrical activity, which may lead to changes in consciousness, behavior and/ or abnormal movements, usually with sudden onset and end, of short duration, from seconds to minutes, which are detected using electroencephalogram, i. e., EEG [6]. There are various types of seizures, each with different symptoms. A broad classification of epileptic seizures is given by the International League Against Epilepsy (ILAE), 2017 [7]. Progress in neurobiology and neurogenetics has altered the understanding of epileptic seizures. However, the high frequency of epileptic seizures in children often makes the diagnosis inconclusive and undefined. Errors are made in the recognition of crises, and therefore, in the treatment of the patient with seizures, including too low dose for the patient, too high interval between doses, wrong choice of the drug, wrong choice of route of administration. The recognition of epileptic seizures and early therapeutic approach is essential for the prevention of complications  [8]. In the present work we will try to analyze the information on the classification and diagnosis of various types of convulsions in children, and that will provide the methodological support for specialists in the field.
SCOPE OF THE STUDY
Is the presentation of the National clinical protocol of management of seizures in the child, developed on the basis of international guidelines and assessment of the type of seizures, in accordance with the modern classification of these nosological entities. Carrying out a study of a group of patients to specify the different type of seizures.
METHODOLOGY OF THE STUDY
The study based on review literature, protocols and international guidelines. A retrospective analysis of 211 medical records of children aged from 28 days to 5 years, from 2014 to 2018, with seizures, to assess the type of seizure according with the classification of the type of seizure, epilepsy and epileptic syndromes, ILAE 2017. Supplemental examinations were neurological tests, electroencephalographic investigation, i. e., EEG, cerebral imaging by MRI or CT, and genetic analysis. Statistical processing were using t-criteria Student test and confidence interval coefficient 95CI. The children enrolled in study were under supervision of pediatric neurologist during 1 – 4 years ± 11 months, at various medical institutions in Republic of Moldova (RM). 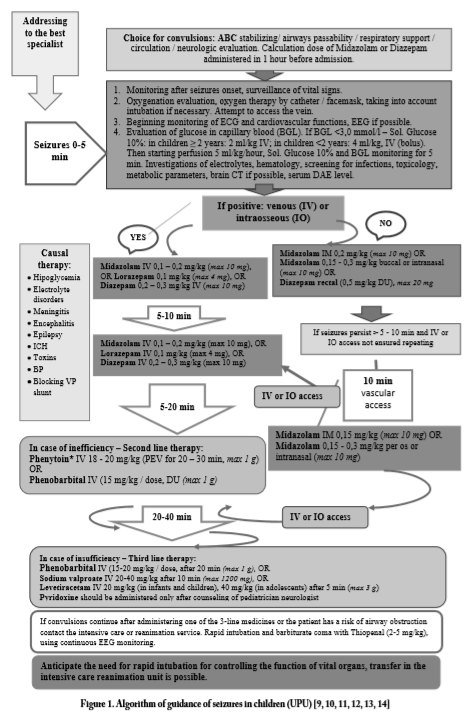 It is correct that the EEG recording would serve as support for confirming the type of the seizure, its classification and localization, as well as can be used for decisions on initiating and cancelling anti-epileptic drug therapy [10, 11]. Thus, the definition of convulsions is as follows: The seizure crisis is a transient event characterized by clinical signs and/or symptom, caused by paroxysmal modification of neurological function due to excessive discharge and hypersynchronous activity of a group of neurons in the brain, which occurs with or without loss of consciousness, being detected using electroencephalogram (EEG) [7, 12, 13, 14]. There are unprovoked seizures, i. e., occurs in the absence of a potentially harmful factor or going beyond the time interval established for the occurrence of acute symptomatic seizures, and provoked seizures, which are influenced by provoking factors. The convulsive seizures, which are a common symptom of epilepsy, are one of the most common and disabling neurological disorders are unprovoked. However, convulsive seizures may also be associated with other conditions caused by seizures itself including the following: acute CNS pathologies, i. e., stroke, trauma, infections, arterial and venous malformations, and hemorrhages, surgical interventions which are were undertaken 7 days before the seizure, systemic pathologies including toxic and metabolic conditions, i. e., hypoglycemia, decreasing the level of calcium, sodium, renal insufficiency, acute hepatitis etc., administering of toxic substances, narcotics, alcohol, and other pharmaceutics, and withdrawal convulsions, etc. It is important to recognize the true convulsive seizure and pathological conditions which are causes of its development, in order to understand the integrity of the physiopathological mechanisms, and to develop the basis for the treatment of epileptic seizures and epilepsies. The analysis of the clinical aspects of seizure was carried out by a group of experts from the ILAE, which subsequently, in 2017, proposed a new classification [7]. Every time where we deal with the patient with seizures it is necessary firstly to define whether this is a convulsive seizure. Then, after we have given help to the patient, it is necessary to determine the cause of the seizure. Every time there is a case of unknown cause, it is necessary to take into account all the methods indicated for the diagnosis. Among them it should be noted the description of the seizure, the data of neurological and somatic examination, the history of the disease, if it is recorded, e. g., a history of epilepsy or febrile seizures, diagnostic tests, such as EEG, neuroimaging, and genetic studies, if they are indicated [16]. Observation, clinical examination, history of seizure and diagnostic tests help specialists in the field to differentiate epilepsy from numerous clinical conditions that mimic a convulsive state, e. g., psychogenic seizure [7, 14, 16]. Recurrent nonprovoked seizures are common to epilepsy, which is due to numerous causes associated with underlying brain damage [16].
A secondary condition of short duration, caused by a reversible cause such as fever, hypoglycemia, etc., can cause the provoked seizure, which does not belongs within the definition of epilepsy. Approximately 15% of children under 15 years of age suffer from various seizures, which are the following: 10% – non-epileptic paroxysmal disorders, 3% to 4% – febrile seizures; 1% to 1.5% – epileptic seizures. The most recent classification of epileptic seizures, epileptics and epileptic syndromes was published in 2017. Seizures are divided into four categories, namely, focal (formerly called partial), generalized, unknown and unclassified. Thus, focal seizures originated from a neuronal network limited to a hemisphere that can be discreetly localized or spread locally, while generalized seizures start at a certain point in the brain and spread rapidly in bilateral distributed networks. Similarly, the seizure can develop focally and subsequently generalize, becoming the focal bilateral. Seizures can come from the cortex or subcortical structures.
To meet the needs of various physicians and researchers, were created as basic (Table I) as well as extended (Table II) versions of seizures classification. The basic version of seizures classification is a short form (Table III) of the extended classification and is intended for pediatricians, non-neurologists, general neurologists, general practitioners, nurses and medical assistants. The extended variant (Table IV) is more detailed and can be used more by epileptologists/ neurophysiologists and researchers. Approach to a child with an acute convulsive seizure is very important, with particular importance of clinical assessment based on history and detailed examination of organs and systems, as well as justified choice of investigations and steps of following guidance. In addition, it is necessary to recognize common non-epileptic events that mimic the epileptic seizure and can be erroneously interpreted as epilepsy. Seizures have the following characteristics: Seizures manifests as severe, involuntary and jerky contractions of muscles, often accompanied by loss of consciousness; Recurrent seizures are determined by a form of epilepsy; Seizures may, in certain circumstances, take place on the healthy brain; Seizures become chronic and repetitive, in circumstances which are determine development of a pathology, i. e., errors in metabolism, trauma, infections, strokes, CNS developmental abnormalities etc. [7]. The focal seizure (FS) is a paroxysmal neural discharge which originating from neural networks within the hemisphere, the discharge is limited to a particular sector in the cortical structures, called epileptic focus. FS may debut with normal, disturbed
or absent consciousness and bilateral tonic-clonic seizures. 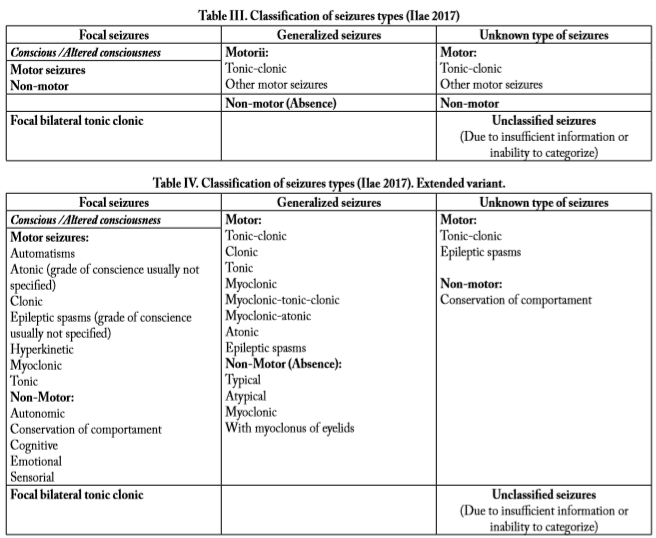 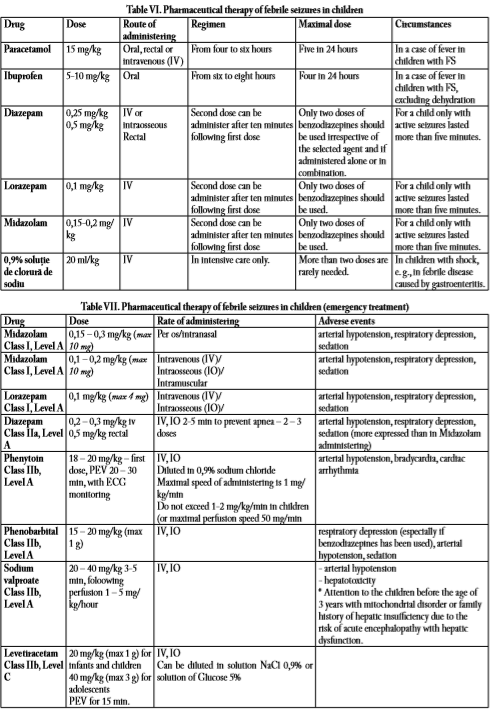