INTRODUCTION
Neonatal seizures are epileptic manifestations that occur from birth to the end of the newborn period, and are the most common symptom of neurological dysfunction in the newborn. The neonatal period, especially the first 1-2 days of the first week of life, is the most vulnerable stage of life with regard to the onset of epileptic seizures. Thus, neonatal seizures are often a challenge both for acute seizures management and for the frequency of long-term co-morbidities. At the same time, the most important challenge for clinicians is caused by obscure epileptic seizures in newborns, which often results in the failure of their immediate recognition. The lack of evidence-based protocols for neonatal seizures and poor outcomes supplement these challenges. More and more evidence suggests that neonatal seizures are associated with negative neurodevelopmental outcomes, including epilepsy, cerebral palsy, developmental delay, and psychomotor deficits.
However, there is some controversy regarding the role of neonatal seizures on long-term neurological outcomes. Is it still a subject of debate, if they play an independent role in this regard, or is it an indicator of the severity of the underlying pathology? Clinical and preclinical studies on the long-term effects of newborn seizures are required to provide conclusive information on the determining parameters that suggest the risk of long-term consequences following neonatal seizures, the (aggressive) character of seizure treatment and the existence of current proactive treatments such as hypothermia and long-term neuroprotective antiepileptic drug (AED) doses? The purpose of the study was determined by assessing the co-morbidities and the level of neurodevelopment in children who suffered seizures during the neonatal period. MATERIAL AND METHODS The results on the neurodevelopment of 67 newborn children who had neonatal seizures of various etiologies were evaluated. Assessment period – 5 years. Examinations: neurophysiological, imagistic. Similarly, the study of basic preclinical and clinical reports was performed, and the analysis of the latest scientific sources through the search programs PubMed, HINARI and Google Academic, the latest studies in the specialized literature summarizing the impact of neonatal seizures on the neurodevelopment of the child, long-term co-morbidities and predictors of neurodevelopmental disorders.
OBTAINED RESULTS Among the 67 children who presented neonatal seizures during the newborn period, there were various types of access (Figure 1). The most frequent types of seizures were the clonic ones, followed by the tonic ones. The frequency and duration of seizures varied according to etiology, degree of nervous system impairment and type of seizures. The onset of seizures was the first day of life in 42 infants (62.7%), in the second or third day at 16 (23.9%) and after 3 days at 9 (13.4%). 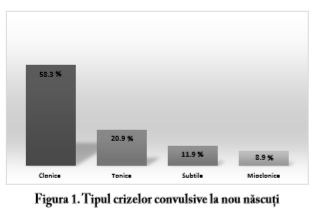 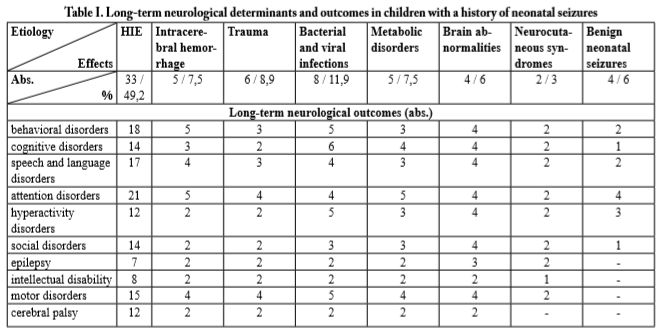