The Cornelia de Lange Syndrome is a rare genetic disease characterized plurimalformative syndrome, with the incidence 1/10000-30000 (1/10000- 50000) of live births. The case study was performed on a patient in aged 15.4 years from urban areas, who are hospitalized in child neuropsychiatric clinic for an episode of loss of consciousness with faintness aspect, headache and thoraco-lumbar pain, being the first hospitalization a neuropsychiatric ward. The mild Cornelia de Lange Syndrome diagnosis was established based on clinical data (particular phenotype) and genetic. The patient has an IQ = 120 (Raven test). The prognosis and the evolution of the Cornelia de Lange syndrome in this patient are favorable. In the easily CdLS with a milder phenotype, which retains many characteristic facial features, was described consistently and is typical of individuals with a pathogenic variant in SMC3 heterozygous or homozygous RAD21 or a pathogenic variant in HDAC8 or SMC1.

The diagnosis is based on clinical and/or genetic (identifying a pathogenic heterozygous variant of gene NIPBL, RAD21 or SMC3 or variants of pathogenic homozygous gene HDAC8 or SMC1) by testing sequential molecular genetics, tests of serial single gene, use of a multi-gene panel and more comprehensive genomic testing [2].

Diagnostic criteria for CdLS were created by US CdLS Foundation, in collaboration with the Board members Clinical Advisory CdLS Foundation and the Advisory Scientific Committee of the CdLS World Federation. If molecular testing identified a mutation in one of the genes associated individual has CdLS. Otherwise, clinical outcomes must qualify facial and criteria for two to three systems in six other categories. For diagnosis are useful: mutation positive genetic testing for CdLS or facial criteria and criteria meet two of the major categories (growth, development or behavior) or findings and criteria that meet at least one of the major categories and two categories facial (major or minor).

a) features faciale- eyebrows joined in the midline and three or more of the following: long eyelashes, short nose, broad and depressed nostrils in anteversion, prominent area between the upper lip, micrognathia or square chin, thin lips, corners of the mouth lowered, high palate, teeth rare or absent.

b) major criteria: growth (two or more of the following): 5th percentile underweight for age, height under percentile 5 for age, head circumference below the 5th percentile for age; development (one or more of the following): developmental delays or intellectual disabilities with speech more affected than motor skills, learning difficulties; behavior (two or more): hyperactivity, attention deficit plus the characteristics of obsessive compulsive disorder, anxiety, constantly roaming, aggression, self-injurious behavior, extreme shyness or withdrawal and autistic-like features.

NIPBL sequence analysis is performed initially. Unless identified NIPBL pathogenic variant, and the affected person has the physical characteristics of CdLS milder, SMC1 sequence analyzes. The negative result is very suspect and CdLS especially in an individual with softer features, it is considered SMC3, RAD21 and HDAC8 [4].

Somatic mosaicism for NIPBL has been reported in a small percentage of people; obtaining a sample of the mouth and a peripheral blood sample can be useful [4]. Testing genomic more comprehensive, including sequence the entire exome (WES), the entire genome (WGS), and sequencing of mitochondrial whole (WMitoSeq) can be taken into account when testing single gene number (or a panel of multigene which includes NIPBL, SMC1, HDAC8, SMC3 and RAD21) confirms the diagnosis in an individual with characteristics CdLS [2]. The Cornelia de Lange syndrome 1 (CdLS 1, CdLS, typus degenerativus amstelodamensis, De Lange syndrome, CDL, Brachmann- de Lange syndrome, BDLS) is caused by heterozygous mutation in the gene NIPBL, which encodes a component of coezina complex on chromosome 5p13. The Cornelia de Lange Syndrome 2 (CdLS 2, Cornelia de Lange Syndrome X-linked, CdLS Xlinked) is caused by a mutation in the gene SMC1, which encodes a subunit of the complex on chromosome coenzina Xp11. The Cornelia de Lange Syndrome 3 (CdLS 3) is caused by a heterozygous mutation in the gene on chromosome 10q25 SMC3 [2].

The assessment is made every three years. They were initiated early intervention services; are specific and useful health information support organizations. The growth assessment is done using appropriate growth charts suitable disease. The treatment with high calorie formulas can help to increase weight. It is also carried out: repeat testing to 18 months boys with cryptorchidism, consult a dental evaluation, pediatric ophthalmology, audiology, troubleshooting school placements and individualized therapy, physical therapy workplace and speech, use of sign language, growth monitoring [7].

The growth failure (> 95%), the failure prenatal growth and intellectual disability (> 95%) may be present. The constitutional growth delay may be secondary to other gastro-oesophageal reflux and feeding problems [6], [7]. In CdLS severe developmental delay is deep and pervasive feature. IQ global CdLS ranging from below 30-102, with an average IQ of 53, but there are cases with normal IQ. Upper limb deficiencies vary from severe defects, with complete absence of forearms, the various forms of oligodactyly, which occur in approximately 30% [6]. In the absence of limb deficiency, micromelia (small hands), the fingers proximal and fifth finger clinodactilie almost all people [7].

Lower extremities are less involved than the upper extremities. Feet are often small and sindactilie the second and middle fingers. Hirsutism is usually present. The genetic counseling provides information and support for people who are at risk for genetic disorders. Counseling can be helpful when planning or expecting a baby. There are many reasons to seek genetic counseling: personal or family history of a genetic disease or birth defects, pregnancy over 35 years, you already have a child with a genetic disorder or malformation, two or more pregnancy losses or a child who died, ultrasound or screening tests that suggest a possible problem. We present the case of a 15.4 years age old teenager from urban areas, hospitalized in Clinic of Neurology and Psychiatry for Children and Adolescents, Timișoara, for an episode of loss of consciousness, faintness aspect, headache and thoraco-lumbar pain, being the first hospitalization in a neuropsychiatry ward. The Previous medical history are marked by genetic testing for diagnosis of Cornelia de Lange Syndrome at 5 years age; genetic tests were performed during a hospitalization for pneumonia in pediatric train station and were imposed by particular phenotype of the patient.

A family history does not show significant data. The family lives in a permanent climate of conflict, violence in the family, her father and constantly assaulting his wife. Based on clinical data, laboratory and genetic tests was diagnosed with Cornelia de Lange Syndrome mild. The neurologic exam shows: orthostatism and 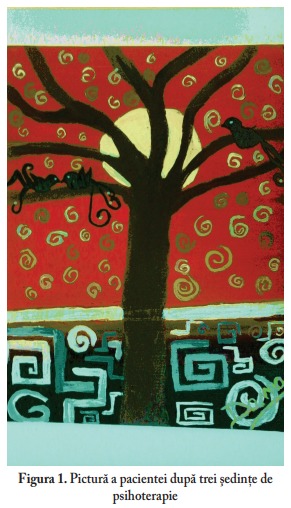 Psihilogic examination indicates IQ = 118 MPS Raven, serious cooperative. So, get hardly a new team. Insight supports with two older sisters. So, it was affected by family tensions (,, my sister from beatings received from the father, came a disability ‘’ says a teenager). The parents were separated but not legally divorced. Rorschach and Szondi Projective Tests: dysphoric experiences significant operating superego excessive tendency to react emotionally, despite the effort of emotional control. Feelings of helplessness; somatization trend.

Type experiences dysphoric, depressed, things appear limited, heavy (painted angles, angular spiral) are limited by a white token, followed by an opening to the future pusionala (using red). It appears open to a relationship, compared with lucidity to look at things from the outside. The tree symbolizes openness to life (Figure 1). EEG is uncharacteristic, with background rhythm track with theta-alpha, tending modular spindles, irritating at hyperpnoea. CT brain fluid spaces extracerebral highlights widening front. Intergirale deep grooves that extend up the wall near the lateral ventricles secondary to loss of white matter. Mild swelling of the body in the rear portion of the lateral ventricles. The bones are thick skull cap increased on account Diplo diffuse bone (about 1.3 cm thick at the front). Cis arachnoid brain MRI shows a diameter of 0.5 cm. Hyperopia highlights ophthalmologic consultation and recommendation to wear small optical correction and regular outpatient control. During hospitalization followed treatment with Prazolex, NSAID, Mydocalm and group B vitamins (B6 Vitamin), with favorable development. The prognosis and the evolution of Cornelia de Lange syndrome in this patient are favorable.

The Cornelia de Lange Syndrome is a rare genetic disorder, with an incidence of 1/10000-30000 live births, a syndrome characterized by the presence of plurimalformative in severe and moderate forms of the disease and phenotypic changes in mild forms associated with abnormal gene . The US Foundation for CdLS in collaboration with members of Advisory Board of CdLS Clinical Foundation and The Scientific Advisory Committee of the World Federation of CdLS established the diagnostic criteria for this genetics condition.

Genetically speaking, CdLS was classified in: CdLS 1, CdLS 2, CdLS 3, CdLS 4 and CdLS 5 with different genetic substrate, clinical expression, evolution and prognosis different. The study case is a mild form of CdLS characterized by specific particular disease phenotype, with positive genetic testing and normal intellect (IQ = 120 Raven). We consider genetic counseling that people with: a history/familial genetic disease/birth defects, pregnancy over the age of 3, parents already have a child with a genetic/malformation, one child dead, two or many miscarriages, an ultrasound/screening tests suggesting a possible disease.