In many acute and chronic neurological disorders, including epilepsy, associated with focal or diffuse destruction of the nervous tissue there is a release of proteins, enzymes and neuron-specific markers from affected cells into interstitial space, and later in biological fluids. One of the modern directions of immunodiagnostics is the study of serum concentrations of the neuron-specific proteins that help to solve problems with diagnosis, monitoring and prognosis of disease evolution.

One of these markers is the neuron-specific enolase. This protein is released when there is a traumatic lesion of nervous tissue, and is used to diagnose conditions accompanied by cerebral ischemia and hypoxia, as well as to study the pathogenesis of neurological diseases occurring with the injury of the blood-brain barrier. In recent years, there has been revealed a growing concentration of NSE in nervous tissue and biological fluids of patients with epilepsy, as well as in animal models that have developed seizures.

Within the framework of many acute and chronic neurologic disorders, inclusively epilepsy, which follow with focal or diffuse neurodestruction there are freed by proteins, enzymes, neurospecific ferments from the affected cells of the brain in the interstitial space and, subsequently, in the biological liquids of the body. One of the contemporary views in immunodiagnostics is the analysis of serous concentration of proteins neurospecific, for working out problems of diagnosis, monitoring as well as anticipation of the pathologic process. One of these signs is the specific neuronal enolase. It is exuded when the nervous tissue is damaged. It is used in the diagnoses of states characterized through ischaemia and cerebral hypoxia, as well as the study of pathogenesis in the neurologic disorders, which develop affecting the haematoencefalitic barrier. Lately there has been observed an increase of NSE concentration in the nervous tissue and in the biological liquids of the sick suffering with epilepsy, as well on animal samples, in which convulsions were present.(7,8).

AIM OF THE STUDY

Emphasis in the correlation between child’s epilepsy (type of convulsive attack, its frequency, the onset of epilepsy, the presence of neuropsychic delay) and the serous level of specific neuronal enolase considering as well particularities in antiepileptic treatment in combination with the neuroprotector in data in order to collect demographic notes, of paraclinic and clinic research: name, surname, cases of epilepsy at newborns and babies. 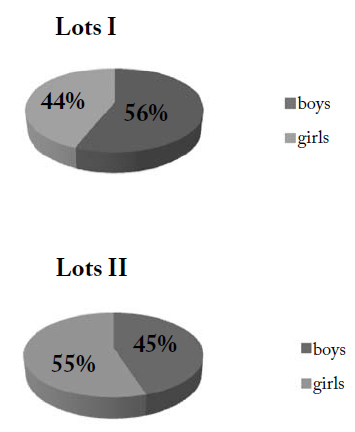 Fig 1. Structure according to peoples’ sex included in the study

The following study has been performed on the clinical bases ICSPIDOSM and C from Chisinau city, in the departments of neuropsychiatry of newborns and psychoneurology and epileptology during the years 2007-2009. For accomplishing the proposed objectives, in the study were involved 108 children (group I), aged between 2 weeks -24 months (average age 9,2±1,2 months), among these 61 (56,0%) – boys and 47 (44,0%) girls. The refference group was made from 108 children without an anamnesis of convulsive attaks, practically healthy (group II) of the same age, among which 49 boys (45,0%) and 59 (55,0%) girls.

Patient’s selection for the research group was performed according to the following criteria: (1) epileptic convulsions of any type or aetiologic, (2) specific changes at EEG (not obligatory), (3) age (2 weeks -24 months). Children who have manifested acute convulsions, but which at the moment of examination on EEG the epileptic focci was not established yet which was also enrolled into the study. For the patients’ evaluation there was made a special questionnaire, in which there were includenecessary perinatal anamnesis data, the presence of convulsions being of various genesis, the onset of convulsions, type of convulsions, their length and frequency, the possible triggering factor, the intercritic length period, the presence of convulsions among relatives, deviations in the neurologic status at the moment of examination, antiepileptic used preparations, changes in the studied biologic note values, efficacity in the combined administered treatment. The type of epilepsy has been settled on the bases of Epileptic international classification, epileptic syndromes and as well connected paroxysmal disorders (2000) (International Lique in Epilepsy Control): (1) idiopaticepilepsy, (2) symptomatic epilepsy, (3) criptogenous epilepsy. Convulsive attaks were classified according to Epileptic international classification (1981) (International Lique in Epilepsy Control): (a) partial (simple, complex), (b) generalised (absences, tonic, clone, tonico-clonic, myoclonic, atonic).

For the newborn babies included in our study (11 cases), aged between 2 and 4 weeks, the settled epilepsy diagnosis was based on the anamnesis data (convulsions in maternity department, relatated by the neonatologists or the service of neonatologic reanimation), out of the mother’s own observations as well as the neuropediatrition’s, and from the data of examination through EEG (unobligatory criteria). 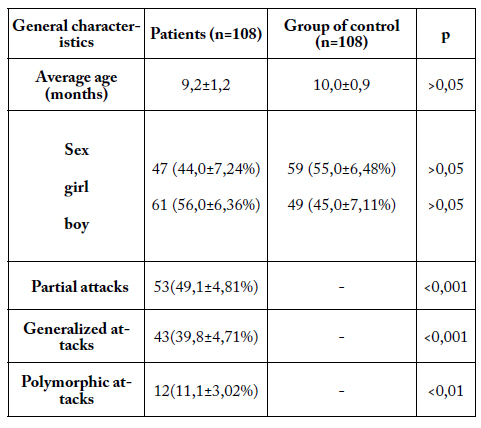 From the data exposed in the above table is seen that the groups of children are homogenous according to age and sex of the patients (>0,05).
For the evaluation of the serous level of specific neuronal enolase, at children from the studied and control group there were gathered 3 ml of venous blood, which was centrifuged and frozen at the temperature of -20º C. We did our best considering the difference in time between the last convultion and venopunction to be as small as possible, or even following the last attack. Afterwards the serum has been transported to the head office “DAC-Spectro Med”, where the necessary investigations were performed. Later, after the administered treatment, in 3 months, at children included in group I of study were taken some more blood samples, in order to examine the above mentioned biological signs and the evaluation of their serous concentration modification after the administration of the neuroprotective treatment. To determine the specific neuronal enolase there was used the test NSE ELISA (EIA-4610). The following method represents a kind of a calorimetric immunoenzymatic method to determine the quantitative concentration of the specific enolase in the serum (2-phospho-D-glicerate hydrolaze), which is an izoenzyme which takes part from the enolase family.The following test is based on the combination of specific neuron enolase with two monoclone antibodies, one being immobilized on microboards, the other being combined with the peroxydase which is used for this procedure. Colouring intensity was directly proportional with the enolase concentration. Its normal values are 0-12 ng-ml, and the pathologic ones are bigger than 12 ng-ml.

Consequently patients from group I were devided through a random method in three subgroups of 36 patients. Children from subgroup I have received antiepileptic treatment combined with Caraxon, those from the subgroup II were added to the basic treatment Cortexin, but the patients from the subgroup III have only received antiepileptic treatment. The basic treatment was in the administration of epileptic preparations, which were differentiated depending on the type of attacks. Most often for generalised convulsions was used valproic acid (Orfiril, Depakine), but in partial attaks was used carbamazepine (Timonyl, Fynlepsin). Most often were used syrop forms, which are easier to administrate to children. Ceraxon preparation is used under the form of syrop. It was administered in the dosage of 1 ml (100 mg) 2-3 times in 24 hours depending on the age of the child during 3 months.

The medication Cortexin was administred in the dose of 0,5 mg per kg, i/m , during 10 days.This type of treatment was repeated in 2 months. That is children from group I of study have received two treatment courses with Cortexin per 10 days each. Afterwards in 3 months from the initiation of the combined treatment these have been evaluated repeatedly whether at home or being hospitalized.

Children from subgroup III have only received antiepileptic remedies corresponding to the type of attack. These have also been evaluated in three months of treatment.

Analysing the serous level of concentration of NSE in those 3 groups of epilepsies where the children were devided, we have received the following data (Table 2) the level of specific neuronal enolase was increased in 50% out of the whole number of cases. It is noticed, as well, that as far the frequency is smaller, the number of cases is much smaller. 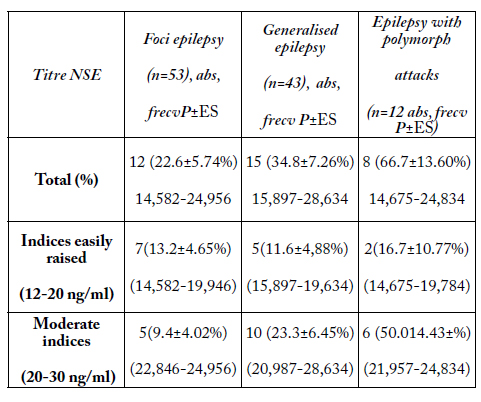 Correlation between the onset of the convultions and the titre of raised NSE is represented in table below. (Tab.4) 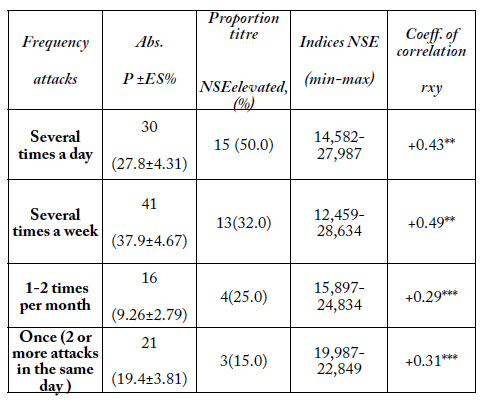 Table 3. Correlation between the onset of the convulsions and the titre of raised NSE

Correlation between the frequency of attacks and the presence of elevated enolase specifically neuronal is exposed bellow (Table 3). 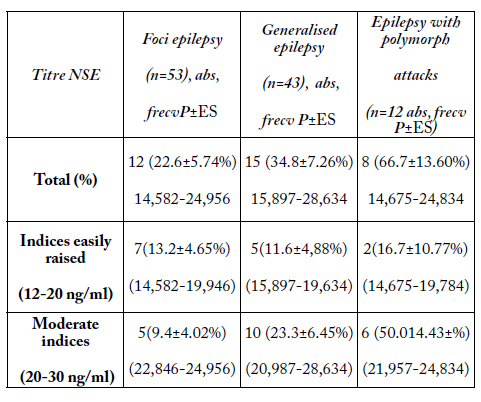 Table 4. Correlation between indices NSE and the frequency of convulsive attacks

An important issue we wished to talk about was the relation between the presence of the delay associated to epilepsy and the level of NSE. In the table below is exposed this correlation.(Tab.5) 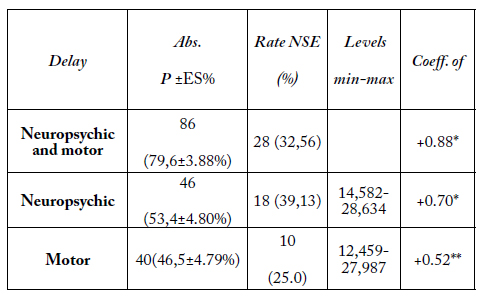 Table 5. Correlation between the presence of the delay associated to epilepsy and the level of NSE from the serum.

We may observe the fact that the frequency of the increased titre of the specific neuronal enolase is in harmony with the frequency of convulsive attacks. For the attacks of high frequency (several times a day)

Apreciation of the treatment according to the criteria of evaluation considering the specif ic neuronal enolase concentration.

Table 6. The levels in serous concentration of specif ic neuronal enolase in the group study before and after the treatment

Thus the medium level of serous concentration of enolase in the first group of study till the treatment constituted 20,818±0,920, and after the treatment 10,108±1,322 (t=6,652,p<0,001). So, it is obviously observed a comparative differentiation in statistics between variations in enolase concentration till the treatment with Ceraxon and after it, so, we may conclude that this preparation presents a factor of neuroprotection in the case of convulsions quite significantly. In the IInd group of study we also have a quite significative differentiation between variation in concentration till and after the treatment. Like so the medium level of enolase till the administration of Cortexyn constituted 21,183±1,407, and after 9,952±0,955 (t=6,606,p<0,001). From here we can conclude indirectly the positive effect of Cortexin as a neuroprotector agent.

We have also analysed the homogenity of these groups of study, evaluating and comparing the medium levels of enolase between Ist and III group, IInd and IIIrd group, Ist and IInd group till the treatment. For groups I and III t=0,344,>0,05, for IInd and IIIrd group t=0,081,>0,05, and for the Ist and IInd group t=0,217,>0,05. So, the statistic difference between enolase concentration among these three groups till the treatment is not certified.

After the administration of the treatment we have obtained a statistic difference between Ist and IIIrd group of study (t=2,283,p<0,05), between IInd and IIIrd group (t=3,802,p<0,05), and between Ist and IInd group (t=0,096,>0,05) was not remarked a statistic meaning, which makes us think that both preparations are quite benefic and possess practically the same neuroprotective properties in the framework of children from the group of study.