SUMMARY
Perinatal loss is an event that may occur, willful or forced, at any time in a woman’s life. Losing a child is one of the most traumatic emotional experiences that tests the psyche of a possible future mother. Th e purpose of this work is to analyze the type and seriousness of post-traumatic stress hat women have had after a miscarriage, compared to a control group with interrupted pregnancies on request. 50 women, divided into equal groups (50% with abortion on request, 50% miscarriage due to other causes) were included in the study. Th e questionnaires that were used were: PTSD and Perinatal Grief Scale. Statistical analysis of data revealed a statistically signifi cant diff erence between the two groups in PTSD and miscarriage pain for all measured scales (p = .000; p <.001). Keywords: miscarriage, abortion, post-traumatic stress.

INTRODUCTION
Women who experience a miscarriage, often, claim to give up their own goals, plans and dreams. They resort to social isolation. Surrounded by friends who already have their own families, they feel lonely and alienated. Psychologically rather than spiritually, a pregnancy allows a woman to feel a complete woman [1-3]. The desire to have children is present since childhood. Later, when these goals to do not become a reality due to various causes, the women experiences the humiliating inability to feel a complete woman [4, 5]. There are a lot of normal reactions following a miscarriage, such as: constant lack of value, deep guilt, anger against injustice, sense of emptiness and fragmentation, but also psychosomatic symptoms [6-8]. All these can be better understood as a result of overwhelming wounds of self esteem, rather than a suffering caused by the death of the baby. The whole therapeutic and psychotherapeutic approach must be personalized and carefully adapted [9-11].

MATERIAL AND METHODS
A total of 60 women who suffered perinatal loss participated in the research. All participants are of Romanian nationality, aged 15-35 years (average age m = 27.61, AS = 4.13).
Participants in the research were grouped into two equal groups: a group of 30 women requested abortion (mean age m = 26.26, AS = 4.45); a group of 30 women with miscarriage (mean age m = 28.96, AS = 3.33). The questionnaires (PTSD and Perinatal Scale) [5, 6] were completed by the participants during the hospitalization at the Odobescu Obstetrics and Gynecology Clinic in Timisoara, during the period 2016-2017. All participants completed a consent form on the use of research data. 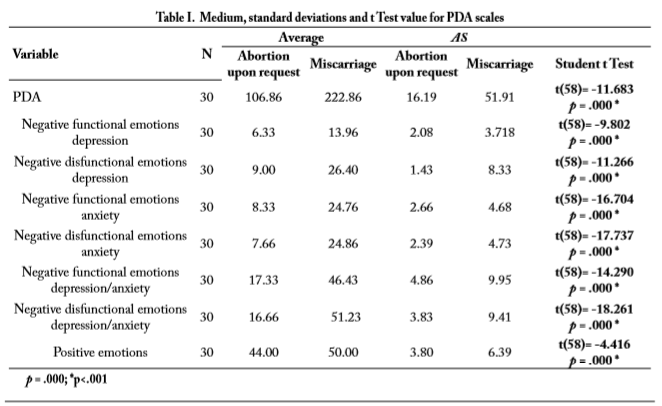 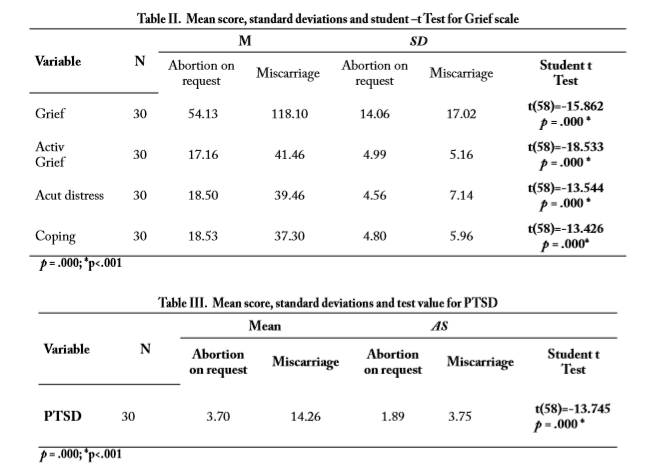 RESULTS AND DISCUSIONS
Statistical analysis of the data reveals a significant difference between the two groups in terms of lossrelated pain for all measured scales (p=.000; p<.001), the average of the participants in the miscarriage group being higher than abortion on request group, indicating a relevant tendency in women with loss of pregnancy to feel pain, sadness and acute distress (Table I). The statistical analysis of the data revealed a statistically significant difference between the two groups in the PTSD specific symptomatology (p = .000; p <.001), the mean of the participants with the loss of pregnancy lot being higher than that of abortion group, indicating a significant tendency in pregnant women to experience PTSD-specific symptomatology (Table II). The results reveal that the level of PTSD specific symptomatology is significantly lower (p <.001) in women who have requested abortion, 46.7% of whom have some symptoms of low intensity and 53.3% of moderate intensity symptoms. 16.7% of
women with a loss of pregnancy show symptoms of moderate intensity and 83.3% high / severe, with more specific trauma symptoms (intrusive thoughts, nightmares, flashbacks, event retrieval, avoidance, increased reactivity, thoughts and negative emotions) according to the diagnostic criteria for moderate / severe PTSD. These results are similar to those reported in J. Farren’s study [12], which also shows that these symptoms persist for at least 3 months after pregnancy loss, especially for specific symptoms in PTSD (Table III).

CONCLUSIONS
The results reveal statistically significant differences between the two groups of participants regarding the impact of the loss of pregnancy, meaning that the level of suffering loss and distress is significantly higher in women who have lost their pregnancy compared to those who request abortion. Thus, the results show that short-term emotional responses to pregnancy loss are significantly higher than those identified in women who request abortion.