SUMMARY
This paper aims at the issue of empathy and emotional distress in Forensic Medicine. Th e study was conducted on a group of 30 people aged between 36 and 60, with a work experience between 10 and 40 years, forensic experts. For data collection, the Profi le of Aff ective Distress (PDA) and Emotional Intelligence (SEI) questionnaires were used. Th e results show that there are signifi cant diff erences between the groups regarding the length of service, for the emotional distress scale as well as for the empathy scale. Th e results showed that both women and men are equally emphatetic, with no diff erences it comes to regulating the emotions of others and emotions evaluation. Keywords: distress, emotional intelligence, Forensic Medicine, empathy

INTRODUCTION
The medical-forensic clinic and pathology are the two cutting-edge medical disciplines where doctors often receive informations that are agonizing traumatic from a psychological point of view, firsthand information, in the form of historical results, of examination and investigation. They do not receive the information in an ad-hoc manner (as the emergency department physicians), but in a daily continuous way, throughout their active career [1, 2]. The short and long term implications on the physician’s psychological health as well as the defence mechanisms in the doctor’s way of thinking and the implications on their personality and behaviour have been very poorly researched [3-5].

MATERIAL AND METHODS
The study was conducted on a group of 30 people aged between 36 and 60, having a work seniority between 10 and 40 years, forensic experts working on the territory of Romania, namely in Bucharest, Craiova, Cluj and Târgu Mureș. The average age of the group is 48 years, of which 12 subjects are female, with the remaining 18 subjects being male. Subjects participating in this study were asked to complete two questionnaires: Profile of Affective Distress (PDA) and Emotional Intelligence (SEI), previously signing a consent to be included in the study. The scale of affective distress is a tool developed for the purpose of assessing the subjective dimension of functional negative emotions, dysfunctional negative emotions, and positive emotions [2]. The emotional intelligence scale includes 4 subscales: emotion assessment (EvE); personal emotion adjustment (REP); the emotions regulation of others (REC) and the emotions utilisation (EU) [3, 4].

RESULTS
Figure 1 shows that there is a weak link between the two variables; only 7.7 percent of positive emotions have an influence on the regulation of personal emotions

From the graphical representation below (Figure 2) it appears that between the two variables, a weak link exists, namely 4% of the positive emotions influence the regulation of the emotions of the others. 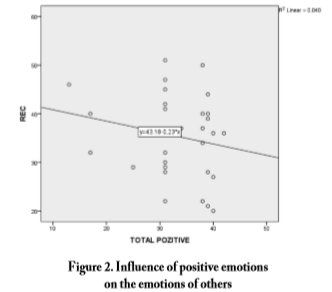 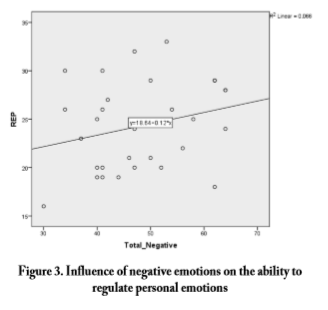 As in the case above, it has been demonstrated that negative emotions have only a slight influence regarding the regulation of the emotions of others, expressed by a percentage of 1% (Figure 4). 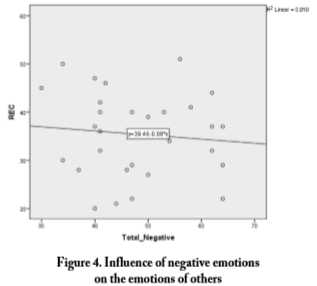 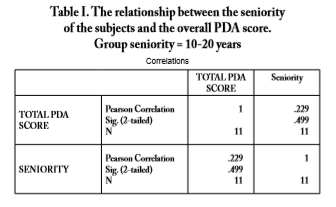 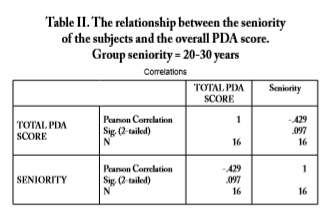 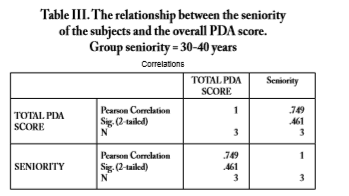 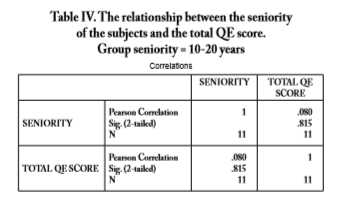 In the present case, a correlation coefficient equal to 0.687 was obtained, Sig value is 0.003 <0.05, which shows a significant relation between the two; between the working experience of 20-30 years and the total QE score there is a direct and moderate correlation (Table V). 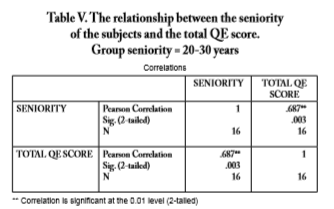 The correlation coefficient is 0.984, the value of Sig. being 0.114> 0.05, showing an insignificant relation; between the group with a working experience of 30-40 years and the total QE score there is a direct, strong correlation (Table VI). 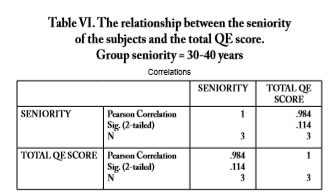 Following the statistical results, taking into account the three intervals of work and the total QE score, we may affirm that the result is inconclusive, because a significant correlation coefficient was obtained only in the range of 20-30 years of working experience. Following the Levene test, we notice that there are no significant differences regarding other’s emotion regulation for the two genres: masculine and feminine.

DISCUSSION
Studies show that the burnout syndrome is present in more than half of the physicians. This affects the professional efficiency and well-being of the doctor, which leads to the development of dysfunctional defense mechanisms, such as the distancing from professional tasks and the negative attitude towards his work [6-9].
In most experimental studies, distress and the burnout syndrome correlate negatively with emotional intelligence respectively empathy, which suggests that patholigists with a high level of burnout are less able to appreciate and constructively express their own emotional feelings and the relationing with others; this proves inefficiency in the management and proactive use of emotions in the solving of the problematic situations [10-15]. Psychologists who have tried to make a correlation between distress-burnout have concluded that from all the distress factors (workload, reduced time, poorly motivated colleagues), one of the most serious factors is the lack of staff [16-21].