SUMMARY
The neurologic involvement in the viral infections is by far a public heatlth problem because they have a impact on the nervous system for short, medium
and long term. The infections with special patogenic agents is a challenge for the public health systems in the world and the reactions of public health care
specialists tends to be unitary for to meeting of the concepts and the gained knowledge until the present. The study of the betacoronaviruses and other
viral species have a great importance for the molecular study and the impact of the cytokines over the mechanism of generation of the viral invasion effects
as also from the point of view of the clinico-imagistic. We want to offer a overlook over the mechanism which can produce the impact on the central
nervous system on short, medium and long term. Apart on anecdotic findings and incidental findings the approach to the rare casuistry and with few frequencies permits a cautious questioning of some problems and the warning of the specialists on the subtle pathologies that can be combated through the prism of generally valid physiopathologic mechanismsin infections and inflammations of any type în infecții și inflamații de orice tip. The correlation
of the infections with corona virus with the acute respiratory dystress syndrome and the new therapeutic perspectives which merit to be discussed the
study of the surfactant and the immunoglobulines and the interferon merit the attention of the researchrs
Key words: special patogenes, coronavriride, surfactant, acute respiratory distress syndrome syndrome, neurologic involvement 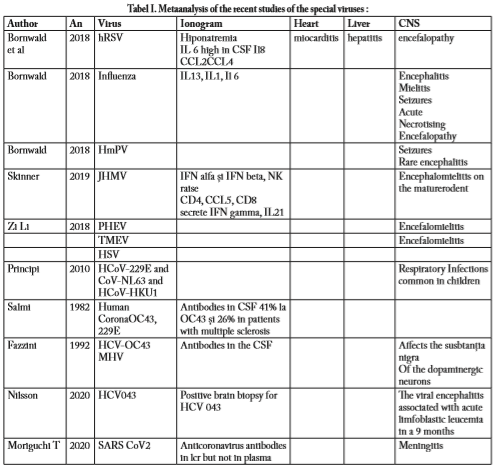 FURTHER RESEARCH FOR TREATMENT Besides the existing protocols we can anticipate some particular situations which can be taken in account so: – The monitoring of some interleukines in the pathologies generated by the special but also in other inflammatory pathologies can anticipate the reaction of the clinician and to modulate the treatment after the amplitude of this response and his variations in the evolution of the disease. The measurment of the Cd4/Cd8 ,the monitoring of the Feritine the IL-1, IL-3, IL-8, IL-13, IL-6, TNF alfa, IFN alfa, IFN beta, the N/L raport merit to be monitored in the severe cases.
Following this parameters and addressing the pshyiopathologic mechanisms which circumscribe the activity of the pathogen agent in the organism the researchers have oritented in the following ways. – The evaluation of the patients with MRI in the case of the neurologic involvement permits the evaluation of the patient in dinamic is a method which must be reserved carefully selected cases. – Long term EEG can evaluate the impact of the appearance of the encephalopathy and to detect nonconvulsivant status epilepticus which can give raise to exhaustion of the respiratory muscles influencing also the oxygenation of the tissues and the brain. The eventuality of the use of NICU EEG can reveal subtle neurologic pathologies which can be combatted with modern which are not sedating the patient and have minimal adverse effects. The Interferon 1 alfa will raise the neopterine which reflects the macrofage activity. Experimental it was demonstrated that the interferon 1 alfa which preceded the infection with a virus SARS reduced significant the instalation of DAD as also the viral load [9]. Some authors recommend nebulisations with Interferon. A interesant perspective is the study of ARDS and all his implications. It is known that ARDS has a high mortality of 40% in present with all the known therapeutic approaches. In those patients the tidal volume is put to 6-7 liters/min and to not expose the patient to to many repeated thoracic CT it is tested and the nitric oxygen as traces is used in concentrations under 5% to asses after volumes measurment the pulmonary which is present volume for the respiratory function.This approach is called Inspired sinewave techinque (IST) and is tested on pigs [26]. The surfactant influences the alveolar tension and has role to maintain the alveoles opened to have a good gas exchange for the alveoles [27]. When we confront with ARDS the ellection method is the mechanical ventilation which has also more types of used strategies. The surfactant is a substance which results from the mixture of phospholipids with proteins which are present in the penumocyte type II cells. In a metaanalysis presented by Meng et al it is shown that the surfactant as a treatment in adults in ARDS become in the attention of the specialists since 1994. And Weg et al presented the patients treated with surfactant after the installation of sepsis with the different types of surfactant administred as aerosols or intratracheal. This study made a review in which it was concluded that the administration of surfactant did not influence the mortality very much statistically. In children the surfactant is given 100-200 mg/kg. [28]. Ambroxol has a positive role in the secretion of surfactant. It can be given in some situations 50 mg/day for to favour the modelation of the action of the surfactant [29]. For to understand the impact on the hole body it is necessary to understand the mechanisms of ARDS which are different in neonate. The researchers concentrated on the administration of surfactant in some clinical trials
in this syndrome. There were made reserches in the ameliorating of pulmonary fonction in adult rabbits at the administration of surfactant poractant alfa or rSP-C33 [30]. In the case of the infection with MERS Cov it was tried a association between the interferon alfa and 2 b, and Ribavirin. In one of the cases the antibiotic adjuvant treatment was with Ceftriaxon and Azythromycine but also Methylprednisolon 500 mg for 3 days [31]. Helicases are some proteins implicated in the dissolution of the chains of the viral molecule of MERS and the nonstructural protein NSP13 makes part from this category being important for the power for replication of the virus. There are more molecules of Triazol in the study which have the helicases as a target which forbid the virus to replicate [4]. A new research idea is represented by the immunoglobulines prepared from the serum of the convalescent patients which could be administred to the patients infected with Covid 19. The disfunction of the cytokine system stays on the basis of the initiation of the therapy with immunoglobulines. In one of the analysed patients for this therapy the patient received also Oseltamevir and Azithromycin and there were also tried association with Moxifloxacin. This patient weighted 66 kg and received 25g/days of imunoglobuline for 5 days after he developed a very severe clinical picture [33]. DISCUSSIONS AND CONCLUSIONS The therapeutic strategy in the infections with special patogene viruses must be adapted to the national existing protocolls and coroborated with specific parameters for each patient and with the associated conditions and the existing therapeutic interactions. In the intensive care services the anaesthiosologist after the evaluation of the patient in collaboration with other medical and surgical specialities will evaluate the risks and opportunities of each treatment but in special situations it merits some methods which are part of the heroic medicine, but with all the precautions and respecting the deontologic codes and the codes of medical ethics. So we wanted to offer a review of some mechanisms and therapies which even they are not in the wide practice they can open the ways of new researches and opportunities of intervention in the complications which can happen in viral infections with special patogens.