The advent of nuclear neuroimaging techniques has vastly changed neurobiology and neuroscience from a bench-research oriented practice to a clinical subdiscipline with diagnostic and therapeutic implications. In particular, magnetic resonance spectroscopy (MR spectroscopy) began as a tool in understanding cellular metabolism in tissues of the prostate gland, kidney, and brain, and has since evolved into a useful diagnostic and prognostic tool in clinical neurology. In this review, the use of proton MR spectroscopy in the diagnosis and grading of glioma is summarized.

Gliomas, including oligodendrogliomas, astrocytomas, epdenymomas, and mixed gliomas are the most common type of primary brain tumor, in both children and adults, making up over 80% of all primary cerebral neoplasms [1]. Gliomas arise from the hyperplasia and eventual anaplasia of glial cells and are graded characteristically as high grade or low-grade by histopathologic evaluation. Clinically, the signs of gliomas vary, depending on the location of the lesion. Many patients suffer from headaches, seizures, vomiting, and in cases of optic nerve glioma visual field deficits. Gliomas located intracerebrally do not metastasize by means of blood circulation, but rather can spread via the cerebrospinal fluid. Treatment (as with most tumors) is dependent on the histologic grading, and symptomatic severity, and can include surgical excision, and chemotherapy/radiation therapy [2-5]. 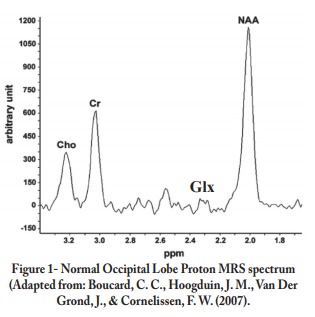 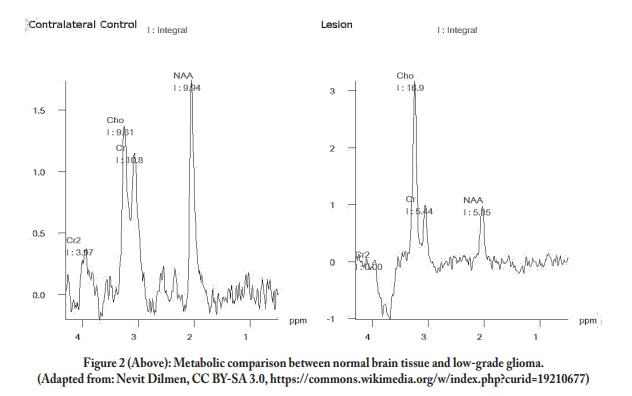 Proton MRS technology is based on the the chemical shift of hydrogen atoms in targeted tissues, according to the Larmor equation [1,5, 6, 7]: ƒ= γHB0 where the resonance of the hydrogen nuclei, ƒ, is equal to the product of the gyromagnetic ratio constant of the species (in this case 1H), γH, and the external magnetic field applied by the MRS apparatus, B0. Interactions between the hydrogen atoms and surrounding particles produces the chemical shift: a change in magnetic field, thereby emanating a frequency within the MRS spectrum. Frequencies can be measured in parts-permillion, and are shown on the x-axis of an MRS graphic plot. The vertical, y-axis of an MRS plot is the relative magnetic field strength, or amplitude generated by a particular metabolite, See Figure 1. Metabolite with normal spectra peaks are listed in Table 1.

Along with anatomical imaging provided by MRI, proton MRS has been shown to have value in the characterization, preoperative grading, and prognosis of cerebral gliomas [4, 8]. Whereas conventional imaging is especially adept at identifying tumor location, size, and hemorrhage, proton MRS can aid in further evaluating the cellular metabolism of the tumoral microenvironment and thereby present insight into the invasiveness of such neoplasm. The biochemistry and molecular physiology of the tumor and peritumoral areas can be evaluated for extent of micronecrosis and gross cell differentiation, and can be useful in cancer grading and prognostic outlook calculations [3, 4, 9].

It is agreed on, and accepted in the literature that the hallmark of many cerebral neoplasms have the following conglomerate of metabolite levels on proton MRS imaging [1, 3, 4, 6, 9, 10]:

3. Lipid (Lip) increase, secondary to peritumoral necrosis (if lesion is of a higher grade).

In differentiating between low and high-grade gliomas metabolites such as choline, Glx complex and myoinositol can be used [1, 2, 3, 4]:

1. Choline (Cho) peak heights are generally proportional to aggressiveness of a glioma;

Case-examples of proton MRS use in glioma are shown in Figures 2 and 3 below: 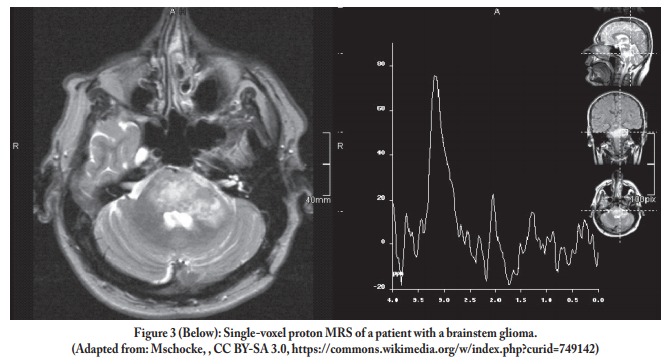 In addition to the grading of a cerebral glioma, proton MRS is a useful tool in delineating tumoral margins non-invasively. In areas around a given neoplasm, higher proton MRS peaks of choline and Glx-complex indicate positive margins, information which is crucial for neurosurgeons in the operating room. Overall, the adjuvant employment of proton MRS in glioma evaluation, along with conventional neuroimaging and neuropathology increases physician awareness, and improves subsequent quality of care.