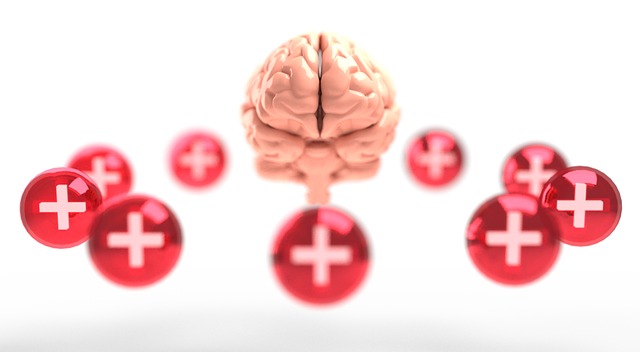 A clinical study conducted on 10 adult patients known with iodine deficit during childhood followed the type of neuropsychiatric manifestations encountered in these patients, their frequency and way in which they were influenced by treatment for the causing thyroid pathology

1. Type of study The research respected the recommended methodology for realizing the clinical epidemiological studies. The study was conducted with the consent of the patients and the Ethic Committee of the hospital.

2. Choosing the subjects In a study lot of 820 patients with conditions of various types of the thyroid gland we identified 10 adult patients which presented iodine deficit diagnosed in childhood. The recruited patients from the study group were hospitalized in the neurology and endocrinology wards in Galati Clinical Emergency Hospital and were assessed clinically every 3 months over a period of 5 years. The clinical exam was correlated with laboratory tests. Laboratory data were noted in the observation sheets of the patients.

4. The data processing followed the calculation of the structure and prevalence indicators.

The conditions caused by iodine deficit (Iodine Deficiency Disorders – IDD) occur due to iodine deficiency during development of the nervous system. Iodine, essential trace element in the synthesis of thyroid hormones is involved in all their actions: it has a decisive role in all the body cells’ metabolism, an important role in the growing and differentiation processes of all the organs, particularly the brain. The crucial stage of brain development is represented by fetal life and first 3 years of postnatal life. Iodine deficiency during this critical period produces irreversible alterations in brain development, mental retardation being a clinical consequence . Iodine deficiency determines [1]: 1. During fetal period:

3. During childhood and adolescence:

– Affections of the physical and mental development;

– Goiter with its complications;

The incidence and severity of the endemic goiter and the biochemical status of the patient depend primarily on the degree of iodine deficit. Endemic cretinism occurs in children whose mothers live in areas with severe endemic goiter, the mother having goiter and the child endemic cretinism – either hypothyroidism or neurological deficiency, or both . The necessary iodine for various age groups and physiological periods is:

The critical periods are represented by pregnancy and lactation as well as the first 3 years (brain development) [1]. In Romania the real iodine intake varies between 60-130µg per day. Iodine deficiency is compounded by the so called “other goiter factors”: some foods (millet, cassava), selenium deficiency, excess nitrate ions, such as Ca, Li, fluorides, humic acids.

– More than 5% of the children with ages between 6 – 10 years old have goiter – clinical criteria;

– – More than 5% of the children of school age have ultrasound thyroid volume over the normal limits (goiter).

– serum TSH with pathological values above 10ng/ml in blood or 10mU/ml in serum;

– – serum thyroglobulin with pathological values of over 10ng/ml in adults and 25ng/ ml in newborns.

Serum thyroglobulin changes in an opposite way of the iodine intake at all ages but especially in newborns.

The consequences of iodine deficiency [1]:

– during the fetal period; In the fetus, iodine deficiency determines a latency in mental development secondary to maternal and/or fetal hypothyroidism. It is associated with low birth weight and increased perinatal mortality. A consequence of iodine deficiency during fetal and neonatal period is the emergence of cretinism and endemic mental retardation. It is the most common complication and the most frequent due to iodine deficiency. The incidence may reach 10% of the population. It may occur as neurological or myxedematous cretinism.

– – In newborns: Primary hypothyroidism may be transient or severe. Iodine deficiency increases the incidence for congenital hypothyroidism.

– In adolescents and children: Regarding those above, we also state about puberty goiter and rarely of endemic mental delay.

– In adults: Iodine deficiency leads to goiter occurrence with the possibility of nodule emergence. Spontaneous or through iodine intake, in the goiter evolution, hypothyroidism may occur.

Endocrinopathy endemic dystrophy – EED – includes the clinical forms of hypo or hyperendemic thyroid activity which must be differentiated regarding the clinically found thyromegaly: thyromegaly with ophthalmoplegia, hyperthyroidism thyromegaly, hyper functional adenoma (forms that appear outside the endemic area). Including these forms in EED is conditioned by their occurrence in patients with goiter. Endemic hypothyroidism is also a part of EED. It may be congenital, neonatal or with late appearance – during puberty or adulthood. Clinically it can be: oligosymptomatic, moderate or severe. In children, goiter is frequently signaled by hypomagnesemic spasmophilia, in clinical categories of EED also being contained multiglandular syndromes in which the thyroid affected by the goiter process, pathogenically participates or associates in: thyroid-ovarian insufficiency, thyroid – somatotrope insufficiency, thyroid-catechol insufficiency. The neuropathic endemic dystrophy is characterized through the suffering of the nervous system caused by malformations that appeared during the embryo fetal period, determined by iodine deficiency and thyroid hormones. The lack of iodine and of thyroid hormones disrupts the formation of the nervous system in the first 3-4 months of pregnancy. The occurrence of cretinism and the various forms of encephalopathies in the off-springs of the goiter carrying parents advocate for the existence of a genopathy which affects these families [1].

1. Cretinism is one of the most severe neuropathic forms, indicator of an old endemic goiter outbreak. In these areas it coexists with myxedematous idiocy, congenital deaf-mute stuttering and with other various forms of neuromuscular dystrophy. Semiologically, it has a complex syndrome characterized through encephalopathy (with varying degrees of mental illness, dysarthrya, deafness, deafmute, polymorphic dyskinesia and secondary static and dynamic disorders). The neuropsychological insufficiency creates a typical aspect with stiffness, an expression of bliss and indifference due to the lesions of the pyramidal system and of the extra pyramidal structures – neostriated, of the hippocampus and the cortex. The whole nervous system is basically damaged with variable regional distribution and different intensity.

2. Hearing loss can also occur outside the neuropathic form.

3. There was reported a high incidence of epilepsy in the endemic areas.

4. Somatic dystrophy in endemic cretinism is characterized through malformations and varied and multiple skeletal, joint, muscle, connective lesions with the occurrence of different arthropathies, hernia, malformations of the pelvis, cartilage growth persistence, flaws in walking. Always present, the associated endocrinopathic syndrome is highly variable, characterized through somatic, thyroid and gonadal insufficiency, the most frequent being the somatotroph hypophysaire insufficiency. Hypothyroidism is frequent, but not consistent, in other studies, there are quoted cases of morons with euthyroidism. It is considered that there is a form of neurological, endemic cretinism and the form of myxedematous cretinism. The deficiency of thyroid hormones would interfere in the formations of the synapses. Gonadal development is as variable from apparent normality to genital infantilism. Classically, there are three degrees of staging cretinism:

1. moron – the lesion has maximum intensity with patients being in a vegetative existence;

3. cretinoid – with a neuro mental capacity that allows a certain degree of social adaptation. It is very important to differentiate between thyromegaly cretinism (2/3 of the cases of endemic cretinism) associated with hypothyroidism or euthyroidism and cretinism without thyromegaly (through congenital thyroid atrophy). In the goiter process there are involved iodine deficiency, as an initiation factor and an autoimmune maintenance evolution and completion factor. Pathogenesis – varies depending on the different forms of dystrophy. Iodine deficiency determines thyroid hormone synthesis insufficiency, followed by TSH and TRH secretion. The increase of TSH determines the hyperplasia of the thyroid cell to maintain normal values of T3. These are adaptive mechanisms which characterize the “benign” period of the goiter. Through prolonged evolution and permanence of the goiter factor, the process becomes dystrophic with lesion intensification. In the group of studied patients we have encountered 10 cases of iodine deficiency – IDD in adults with iodine deficiency present since childhood, representing 1.62% of the thyroid pathologies that were studied. The study of the IDD cases, through iodine deficiency during childhood had the following specific objectives: – determining the frequency of neuropsychiatric manifestations in the cases; – indication of the type of neurological manifestation; Gender distribution: 5 females and 5 males. All the 10 patients came from rural environment.

Age distribution of the patients with iodine deficiency during childhood (fig. 1): 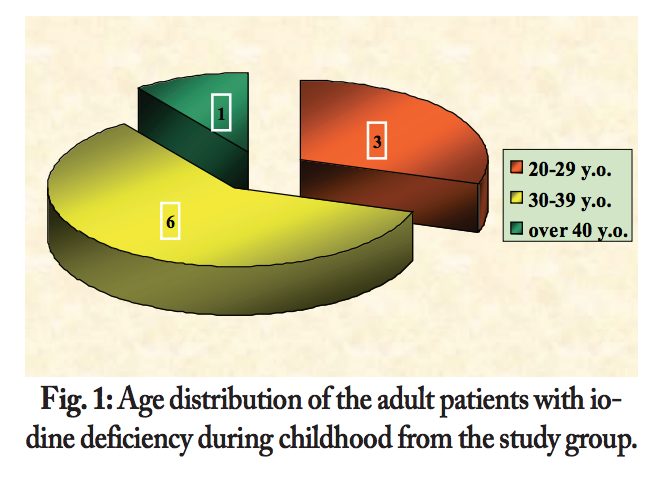 Iodine deficiency during childhood determined the occurrence of the following neuropsychiatric manifestations:

We have not encountered in the study group of associated muscular dystrophy, fact quoted in other studies [1]. Also, we have not found any association between iodine deficiency and isolated pyramidal syndrome, cases quoted by Franchi et.al. (1999) (tab. I). All the cases presented somatic dystrophy, statural hypotrophy – with at least 3 standard deviations below or average and gonadal disorders. 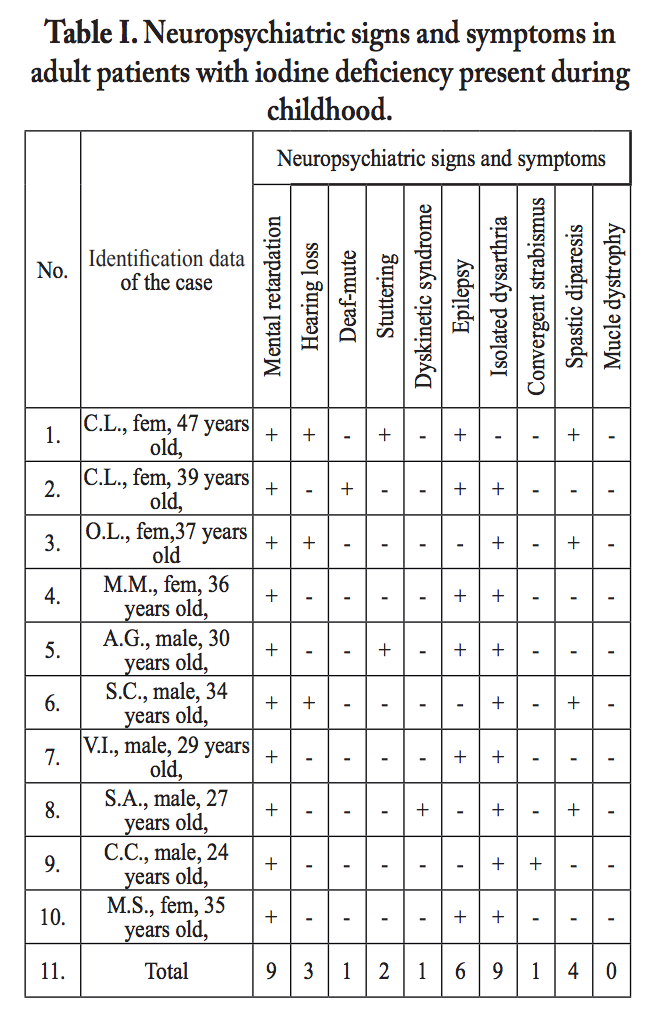 Regarding the mental retardation cases, the I.Q. assessment, according to the W.A.I.S. tests (Wechsler Adult Intelligence Scale) the patients from the study group were placed in the following degrees:

The patients with epileptic seizures were in the neurological dispensary, with partial control of the generalized convulsive seizures through anticonvulsive medication. We found in the family history of the patients, hypothyroidism in the mother, in 3 different cases.

1. The neurological signs and symptoms detected in the patients from our study group that presented iodine deficiency since childhood overlapped those quoted in other studies, with the exception of the association with isolated pyramidal syndrome [Franchi et.al.] and with muscle dystrophy [1], which we have not encountered in our followed patients.

3. Iodine deficiency present in the first months of pregnancy and in the first 3 years of postnatal life determine the installation of a general suffering of the nervous system associated with somatic dystrophy.

4. In the series of IDD cases with iodine deficiency during childhood that we studied, the neuropsychiatric impairment was present in all the patients.