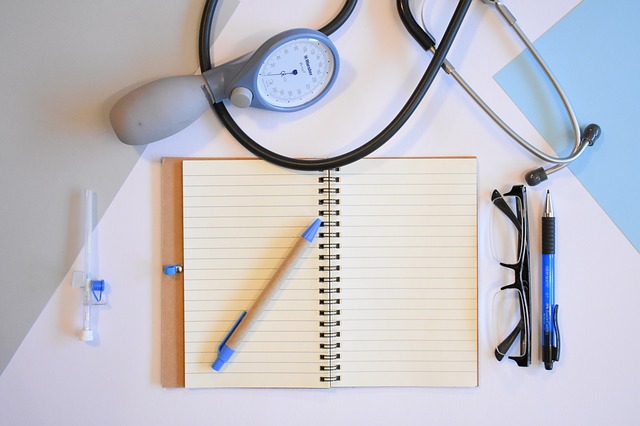 A prospective clinical trial conducted over a period of 5 years on a group of 144 patients with primary hypothyroidism that followed the affection of the cranial and peripheral nerves in this type of thyroid pathology referring to it’s frequency, type of manifestation of the peripheral nervous system and the way in which this type of neurological condition was influenced by the treatment for the causing thyroid pathology

THE PURPOSE OF THE STUDY

We conducted a prospective clinical study supported by laboratory examinations which had as purpose to determine the suffering of the peripheral nervous system – cranial nerves and peripheral nerves in primary hypothyroidism, referring to frequency, clinical and therapeutic response of neurological determinations in this type of thyroid pathology, and revealing the diagnosis difficulties of the damage done to the nervous system by this type of thyroid pathology.

1. The type of study: The research followed the recommended methodology for conducting the prospective clinical and epidemiological studies. The study was conducted with the consent of the patients and of the Ethic Committee of the hospital.

2. Choosing the subjects: The study focused on a group of 144 patients with primary hypothyroidism, who were examined in the neurology and endocrinology sections in Galati Emergency Hospital, followed for a period of five years. Patients were examined clinically and paraclinically every 3 months Clinical examination was associated with paraclinical tests. Paraclinical data were recorded in the observations sheets.

3. Data gathering: For the clinical diagnosis of hyperthyroidism the Newcastle index was used, and in the clinical assessment of the hypothyroidism the Billewicz index was used. For the paraclinical endocrinological diagnosis there were used: hormone dosage T3, FT3, T4, FT4, TSH, thyroid ultrasound exam and thyroid scintigraphy with 99mTcO4, in doses of 2mCi, thyroid biopsy with a thin needle puncture, sella turcica radiography, CT brain scan or mediastinum scan, biochemical usual tests of blood and urine. For the study of neurological damage there were used: electroneuromyography data, VCM, VCS, ocular fundus exam, nervous biopsy with microscopic evaluation,

1. Autoimmune mechanism, with the presence of some immune factors in the serum, most often immunoglobulins, but also humoral factors which determine the decrease of the function of the thyroid cells, by blocking the TCH receptors and by leading to thyroid cell lysis. Often it is considered to be an idiopathic hypothyroidism.

3. Post thyroidectomy – after surgery for thyroid cancer after radioactive iodine or after irradiation against larynx tumors, lymphomas, etc. 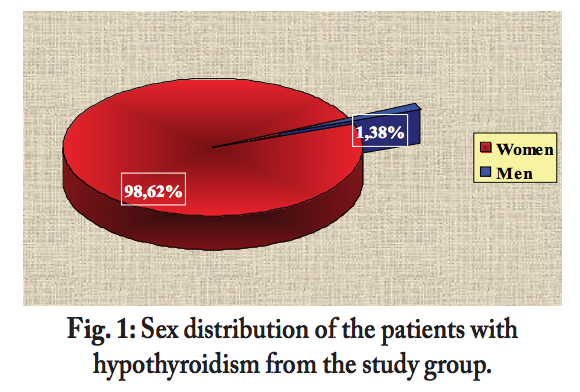 The distribution by area of residence, urban/rural was the following: 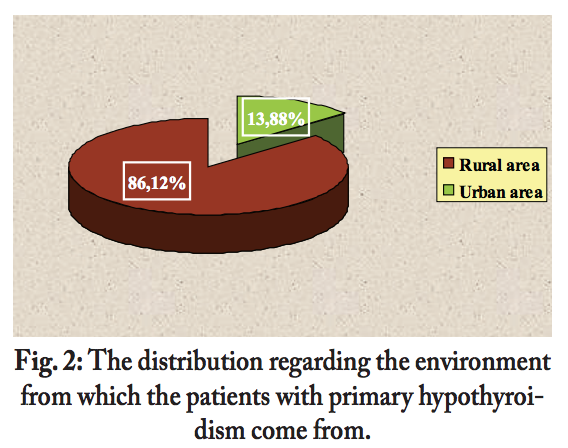 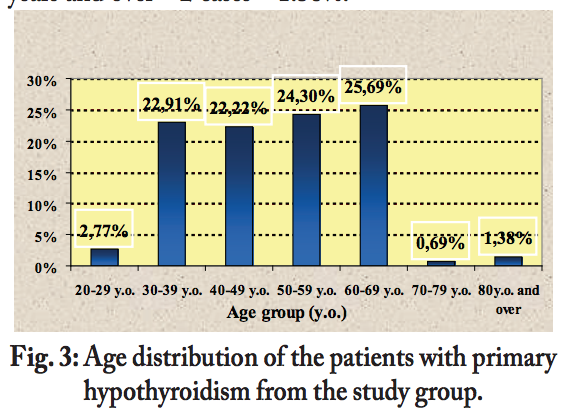 During the follow up of the patients we have registered one death. Out of the 144 patients, 4 were smokers. One case was previously diagnosed with thyroid agenesis and was under thyroid hormone replacement treatment. From the study group, 22 patients presented low values of T3 with T4 within normal limits. Associations of primary hypothyroidism with other diseases from the patients in the study group included:

– phlebothrombosis in the lower limbs – 1 case;

We remark an association between primary hypothyroidism with a high number of cases of tumors with various sites as well as type II diabetes, data which is consistent with that from other studies [1]. Manifestations of the cranial nerves and peripheral nerves encountered in the study group were the following: 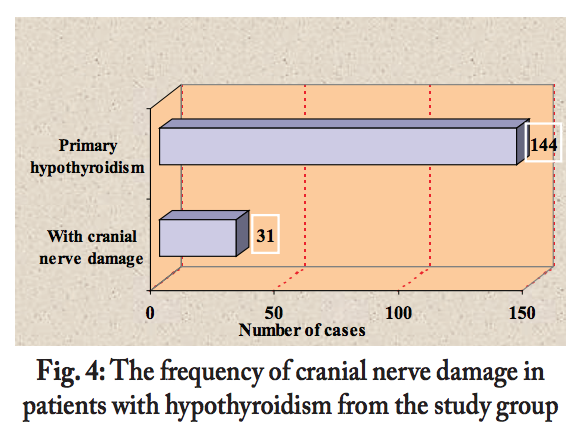 Ladenson (1984) mentions ENP alterations in a large number of patients with hypothyroidism;

We have encountered 2 cases of patients known with primary hypothyroidism that Presented oculomotor paresis with secondary diplopia and vertigo in which the suspicion of ocular myasthenia gravis was invalidated. Oculomotor disorders have improved under hormone thyroid preparations and non-steroidal anti- inflammatory drugs. Limiting the mobility of the eyeballs in hypothyroidism is mentioned by Uldry et. al. [1] in 5-7% of the cases, cases that also present palpebral ptosis having a possible mechanism of diminishing the action of the sympathetic vegetative system on the superior tarsal muscle.

• Frequent damage of the pair number VIII, with perception hearing loss, confirmed audiometrically associated with vertigo and tinnitus, unresponsive to peripheral vasoactive treatment, which is quoted as well in other studies. Thus, Uldry et al. [1] considered that the decrease of hearing acuity and tinnitus are present bilateral in 85% of the cases of hypothyroidism. Uldry et al. consider that there is no correlation between the severity of the hearing deficit and the severity of the hypothyroidism, the mechanism of hearing acuity decrease being the cochlea myoedema which leads to irritation and sensory cells death. There are studies (Parving, 1990) which state that acoustic-vestibular nerve damage is without treatment response.

• Entrapment phenomena (Tab. I) having as mechanism the glycosaminoglycan deposition in the extracellular connective tissue from the perinerve and endonerve, with consecutive fibrosis affected the median and cubital nerves. We could not establish a correlation between the duration and severity of the myxedema and the grade of damage done to the nerve by the entrapment phenomena. 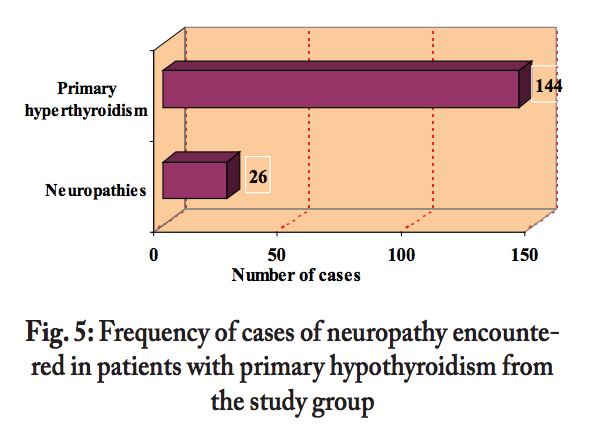 The median nerve compression in the carpal tunnel was encountered in 4 cases of primary hypothyroidism out of which 3 cases with unilateral affection and 1 case with bilateral affection, the diagnosis being established on clinical and electromyographic criteria. The patients associated repetitive depressive episodes. Clinically we had present nocturnal paresthesia and pain in the fingers, associated with motor functional deficiency in the median territory. 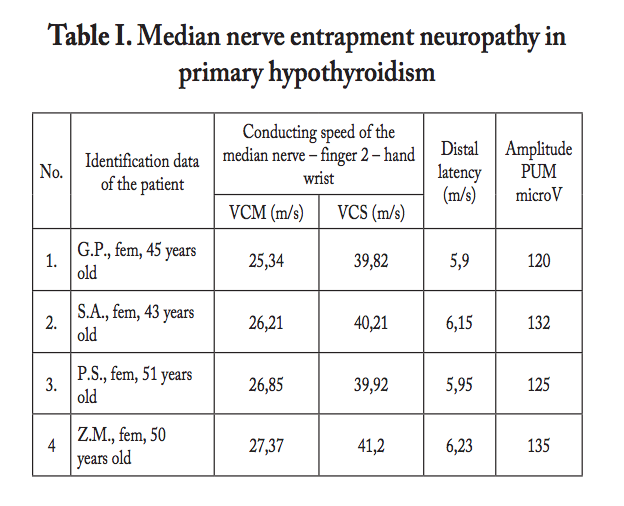 Electromyographic exam showed modifications of the conducting speeds and of the distal latencies, which slowly improved after 3 months of treatment based on thyroid hormone replacement. The frequency of carpal tunnel syndrome in the study group is obviously lower than the one quoted by Uldry et al. [1] which mentions that this type of condition is present in 60-80% of the cases of hypothyroidism, incriminating as mechanism the mucopolysaccharides deposition in the connective tissue ligaments. Asbury [2] mentions the carpal tunnel syndrome in 15-29% of the cases of hypothyroidism, confirming that thyroid hypofunction increases the risk of median nerve entrapment by 70%. In his studies, the carpal tunnel syndrome rarely requires surgical intervention, the improvement being obvious under treatment. Duyff et al. [3] states that carpal tunnel syndrome occurs in 29% of the patients with hypothyroidism, frequently bilateral with improvement under treatment, also mentioning cases in which they encounter cubital nerve entrapment in hypothyroidism. Regarding the cubital nerve compression in Guyon’s canal, this was recorded in 2 cases where the hypothyroidism progress was around 20 years. Cubital nerve suffering was diagnosed based on clinical associated signs with reduced motor and sensory conducting speeds and distal latency prolongation (Tab II). As in the case of the median nerve, the recorded changes improved slowly after treatment with thyroid hormone replacement, on average, after 6 months. 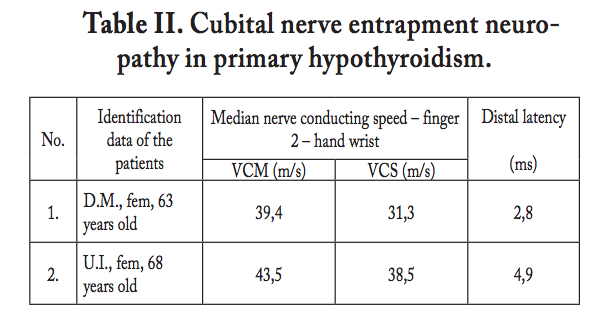 • Sensory neuropathies which manifested through distal paresthesia and, objectively, distal hypoesthesia for thermic and algic sensitivity, and also decrease of the vibratory sensitivity were encountered in 18 cases – 12.5% out of the patients with primary hypothyroidism, in which hypothyroidism was evolving for more than 10 years.

Electromyographic exam performed in 8 cases registered decrease of the conducting sensory speeds to the external popliteal sciatic nerve. Improvement of these values occurred after thyroid hormone treatment of at least 6 months. Data referring to the frequency of neuropathies secondary to hypothyroidism are extremely varied. Thus, after Uldry et. al. [1], acroparesthesia occurs in 40-80% of the cases of hypothyroidism, but objective modifications are present only in 50- 65% of the patients.

The same authors mention that EMG modifications highlight a neuropathy in 70-80% of the cases, detecting the decrease of the amplitude of sensory potentials and the decrease of the sensory conducting speed, and nerve biopsy shows signs of demyelination and remyelination associated with axonal degeneration. The producing mechanism involves metabolism disorders in the Schwann cell, and therapy helps towards improvement. Rao et. al. quotes that sensory neuropathies occur in 10% of the cases with hypothyroidism, stating that severe forms are rare, the damage in these situations being predominantly motor, with the decrease of VCM and highlighting, in the nerve biopsy, axonal degeneration processes. In other studies, Roussel et. al. (2003) considers that neuropathy is a extremely rare complication that occurs in hypothyroidism – exceptional. Duyff et. al. [3] notes that paresthesia in 29% of the cases of hypothyroidism and neuropathies clinically manifest in 42% of the cases. They state that in the occurrence of peripheral nerve suffering, more important is the age of the hypothyroidism than its severity. Dyck and Lambert [4] detect distal palsies and hypoesthesia in 50-60% of the patients with hypothyroidism. They describe sensory neuropathy secondary to thyroid hypofunction as being distal, symmetric, painful, with the decrease of the profound sensitivity and secondary ataxia. According to these authors, the nerve biopsy shows, in cases of hypothyroidism, demyelination and remyelination associated with axonal lesions. Meier and Bischot, Nemni et. al. mention axonal primitive touch with scarcity of the myelinated fibers with large diameters and predominance of those with small diameter, associated with axonal atrophy. Improvement of the symptoms under treatment occurs, after the mentioned studies, after 6 months since the initiation of the treatment, data confirmed even in our study, and the improvement of EMG changes – after several years of treatment. 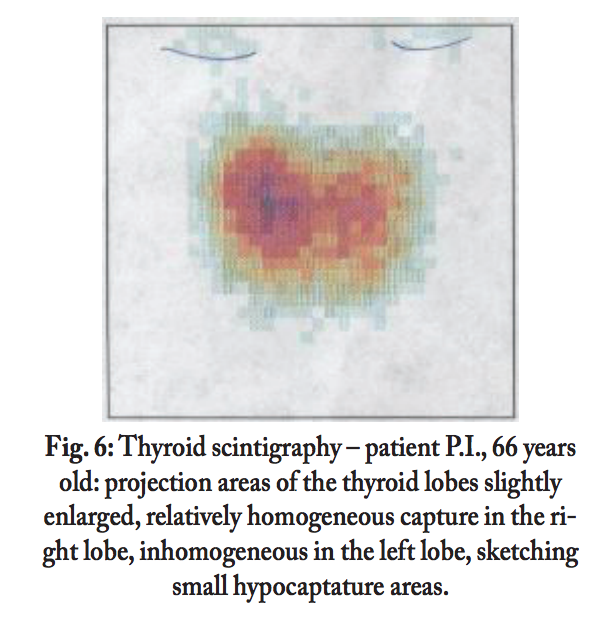 The patient’s evolution was favorable under treatment with thyroid hormones and vitamins group B with improvement after 6 months since the therapy initiation. In the mentioned neuropathy cases the reducing of the patients’ complaints as well as the clinical signs, VCM and VCS improvement were significant after treatment with thyroid hormones which confirmed the etiology of the peripheral nerve suffering. 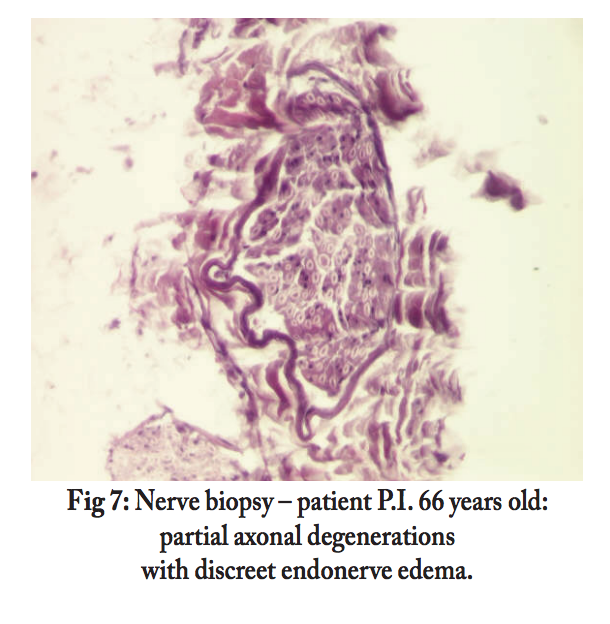 1. Cranial nerve and peripheral nerve affection is frequent in hypothyroidism.

2. Oculomotor nerve condition quoted in other studies could lead to misdiagnosis with myasthenia gravis.

3. Palpebral ptosis seems to be determined by the affection regarding the sympathetic vegetative system.

4. Of the cranial nerves the most commonly affected in hypothyroidism is nerve VIII with perception hearing loss, vertigo, tinnitus, bilateral damage and refractory symptoms to treatment.

5. The facial nerve seems to be affected by entrapment phenomena regarding the Fallope conduct.