In the 20th century, multiple genetic diseases were described in isolates with small populations whose characteristic feature was their descent from a small number of founding ancestors, from ethnic groups that were different from the surrounding population, having their own religion and being away from the communication channels.

Examples of such isolates were lonely islands, groups of mountain populations, or desert areas. Several examples of this kind are presented in the paper.

Since the second half of the 20th century it has been established that there are conditions of population isolation outside such rules, too, isolated groups being discovered within populated areas such as in the middle of the New York metropolis.

With experience in studying small populations from Banat, I focused on tribal groups of Roma who, while maintaining cohabitation rules of Indian caste type, practice endogamous unions with frequent consanguinity.

Thus, I have come across the study of neurological pathology in the Gypsy tribes (the Rudari, Lingurari, Ursari etc.) in which a European Community research team has proposed to review the frequency of genetic diseases.

The working method consisted in:

– trips to settlements with a Gypsy population

– we have identified new autosomal-recessive diseases in Gypsy populations

– we have reported to teams of geneticists in Bologna (Italy), London (England), Perth (Australia) the existence of our casuistry, thus we have formed a leading team that has studied and confirmed in Timisoara the clinical cases that we have found.[1]

The research in this paper refers to the population of Gypsies.

We briefly analysed their history and implications in the genetic pathology as well as their distribution across countries and continents, but especially the presence of the resulting recessive diseases of ancestral particular mutations specific to Roma populations.

Genetic peripheral neuropathies and diagnoses of these diseases were classified by the International Association of Neuropathies (New York 1999) and introduced in Chapter VI in the Charcot Marie Tooth disease group, with different chromosomal localizations.

The three entities represent a new neurodegenerative pathology and are part of the genomic structure of three different chromosomes. Having their own position as specific pathological genes in the human genome, they are considered new, and to their identification I have contributed.

New diseases identified in Romania, too:

To confirm the diagnoses, in the teams that I was a part, we collected biological samples which were processed at the Rizzoli Institute in Bologna and at Edith Cowan University in Perth, Australia.

The studies and researches that I participated in conducted us to select fifty-two families where, up to the present moment, we have identified 231 cases with these three diseases, being the first descriptions in Romania of a specific pathology for micro-populations of Gypsies: 97 cases of NESML, 73 cases of NESMR, and 47 cases of SNCCDF were described, in the counties of Timis, Arad, Mehedinti, Dolj, and Caras-Severin.

It is a severe form of sensory-motor neuropathy accompanied by deafness, that is a constant feature. It has an autosomal recessive pattern of transmission, the genetic defect being located on chromosome 8q24.

It is caused by an ancestral mutation identified in 2001 within the Human Genome Project and constitutes a premature termination of the R148X codon in the 1 N-myc gene.

It is characterized by muscular atrophies with onset at the age of 5 years, more distally accentuated, with progressive evolution, sensory disturbances and skeletal deformities.

We identified NESML in 97 cases from 32 families.

It is a severe recessive autosomal sensory-motor hereditary neuropathy with localization on chromosome 10q22 near the EGR2 gene.

The onset of symptomatology ranges from 8 to 16 years of age with muscle weakness and distal atrophy with progressive evolution and early immobilization.

We have identified this form of neuropathy between the ages of 9 and 43 and described it in 73 cases in 20 investigated families [2,3].

It is a serious form of autosomal recessive heredodegenerative neuropathy, more frequent in Rudarian Gypsies.

The gene responsible for the disease was located in the telomeric region of chromosome 18q.

The disease is characterized by neuropathy, congenital cataract, nystagmus and microcorneasis, distal atrophy and osteotendinous atrophy. It is accompanied by nanism, facial dysmorphia, hypogonadism and skeletal deformities: hollow foot and varus equin [4,5,6,7].

We identified this neuropathy in 47 cases (ages between 4 and 47 years) in 52 investigated families.

The genealogical tree was recorded in all the families investigated; it allowed us to determine identical cases in the same family, illustrating the author’s hypothesis about the high frequency of autosomal recessive neuropathies in Roma populations living in isolates, endogamy and consanguinity being constant [1,8,9]. I present as examples three pedigrees accompanied by photographs of the identified cases with the three forms of peripheral genetic neuropathies. 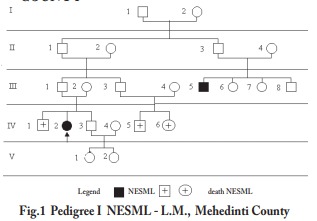 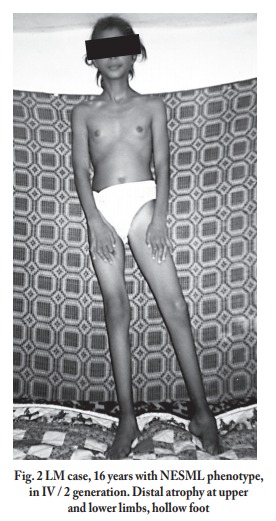 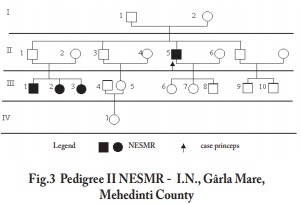 The II/5 princeps case was 32 years old at the moment of identification. The neurological examination revealed: muscle weakness with distal atrophy in upper limbs and lower limbs, hand in “claw” and foot in “cock” aspects. In the same family we have identified three genetically confirmed NESMR cases: III/1, III/2 and III/3. 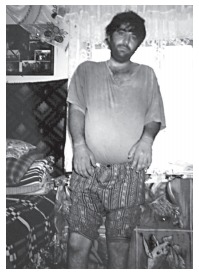 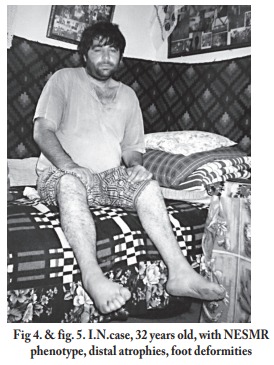 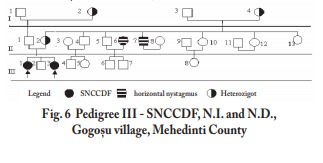 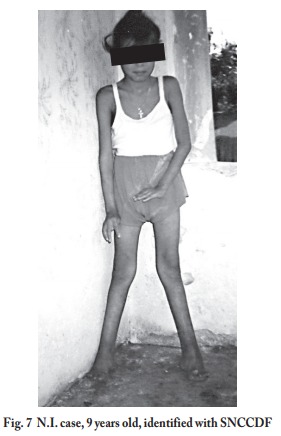 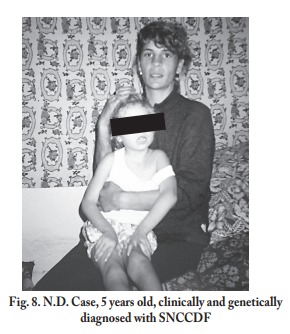 ND (III/3): Since birth, she had cataract, horizontal nystagmus and sensory – motor neuropathy.

The genetic studies have confirmed the disease at 1 and 2 from the III generation. The heterozygous state was detected in: I /2 and I /4 and II /2, respectively the mother of the identified two cases.

RESULTS OF THE STUDY

The results of the study are systematised in illustrative tables that allow perfect synoptic memorization of each distinct clinical entity:

– Syndrome of neuropathy with congenital cataract and facial dysmorphia.

The results obtained by the study team substantiate the fact that, in Romania, too, there are population groups at high risk for hereditary neuromuscular pathology.

Molecular genetics studies conducted in international collaboration have enabled the defining and characterising the mutations of the genetic defect and the genetic mapping of the critical regions characteristic to hereditary sensory-motor neuropathies discovered and described in Roma populations from Romania.

The frequency of the genes responsible for ancestral mutations is high, the messenger rate for the described autosomal recessive hereditary neuropathies being estimated between 2 and 5%, as against the total Roma population in Romania [1].

It has been proved that: these diseases are genetically homogeneous, autosomal-recessive, and are potentiated by the increased frequency of consanguineous parents and the context of ethnic endogamy.

The results of our studies confirm that the described diseases are characteristic to specific Roma groups that have preserved the tribal tradition. Inside such groups, the founding mutations have been transmitted at the same time with the diaspora of the Gypsies, spreading heterozygous and affected individuals throughout Europe.

The patients identified and diagnosed by the author contributed to define the maps of genetic diseases in the isolates of Roma micro-populations from Europe.

These studies and identifications are important because they represent both a starting point and a basis for future studies aimed at mapping the genetic diseases in the Gypsy populations from Romania in consensus with international studies.

The results of clinical and genetic studies in Gypsy populations are important for public health policies and for targeted primary prevention of hereditary neuromuscular diseases, which have been shown to have increased frequency in these populations.

For medicine, screening tests in neonates are of particular importance for the detection of genetic neurological diseases described as specific to Roma ethnicity.

Today, due to the homogeneous genetic basis, there is a possibility that specific screening tests may be added to the classical ones to allow for the extension of programs meant to detect pathology in neonates.

Detection tests for heterozygotes should be available to Gypsy communities at high risk for severe genetic diseases to prevent the danger of the emergence of these diseases.

Information on the identification of affected gypsy populations is important for interventions aimed at improving the health of the population.

This information will facilitate the planning and implementation of programs aimed at early detection of the frequency of the genetic diseases targeted through genetic counselling.

The importance of the educational component of these programs is undeniable given the fact that addressability to the doctor in these populations is rather low, especially in areas where tribal traditions and practices of consanguineous marriages are still quite common, which preserve the isolation of these ethnic groups.

In my opinion, all these clinical and genetic studies have the role of improving the quality of life of deprived populations through early detection, genetic counselling and appropriate prevention measures.

These new diseases need to be known by physicians in order to be diagnosed early, so that patients should benefit from medical care and specific support as well as rehabilitation treatments depending on the evolutionary stage of a particular disease. Regarding the attitude of the Gypsy families that have been clinically and para clinically investigated, compared to the presented study, it was accepted in the Roma community. Most of diagnosed cases are regularly supervised, with neurological reassessment and specific treatments in order to limit the evolution in the course of time.