INTRODUCTION
Tuberculous meningitis (MTB) is a major problem among children. It is often associated with disability and death. Worldwide, MTB represents the majority of deaths caused by TB. TB in children is estimated to represent 10-20% of all TB cases in poor countries, accounting 8-20% of tuberculosis-related deaths. Approximately 25% of TB cases in children are extrapulmonary, tuberculous meningitis (MTB) being the worst form [1]. Tuberculous meningitis (MTB) is a subacute meningeal disorder that occurs in different stages. The first stage is characterized by nonspecific symptoms: subfebrility, headache, irritability, drowsiness, malaise, vomiting, photophobia, apathy and weight loss. In infants, there may be decrease of developmental areas, fever, cough, altered consciousness, and convulsions. The neck stiffness is typically absent. This takes about 1-2 weeks. The presence of nonspecific signs and symptoms makes it difficult to suspect and diagnose TBM in the first stage. A history of contact with an tuberculouse patient (~ 50% of cases) may also be important. The second stage is usually characterized by a sudden onset with the following signs: lethargy, neck stiffness, meningeal positive signs, hypertonia, convulsions, vomiting and focal neurologic deficits. Development of hydrocephalus, increased intracranial pressure, encephalitis with focal signs, cranial nerve involvement (30% -50% of cases), most frequently the 6th nerve, and loss of vision are taking place. Most patients are clinically diagnosed at this stage.

This stage is followed by the third stage, which involves the association of decorticat / decerebrat posturing, hemiplegia, coma and eventually death [1]. The aim of the paper is to present diagnostic criteria and particularities of clinical evolution of tuberculous meningitis in the pediatric population starting from the description of two clinical cases. MATERIAL AND METHOD Two clinical cases of positive tuberculous meningitis in one case and death reported in the second case. The patients were hospitalized in the neurology unit of the Institute of Mother and Child Health Care in 2019, with the initial diagnosis of undetermined meningoencephalitis of an etiology complicated with occlusive hydrocephalus.
RESULTS: PRESENTATION OF CLINICAL CASES.
Clinical case 1. A 9-month-old patient was admitted at our Depatment with persistent fever for 2 weeks, repeated vomiting, strabismus appeared 14 days ago. One week before admission, the child was admitted to the district hospital with symptoms of fever, vomiting and regurgitation, strabismus. There was no improvement in the neurological status, inspite of the administered therapy and the child was transferred to Hospital of Mother and Child Health Care with the suspicion of an intracerebral tumor. The child was from the 4th birth, from unexposed to TB mother, born at 39 weeks of gestation, weight -2224 gr, height- 45 cm, being transferred to an orphanage. 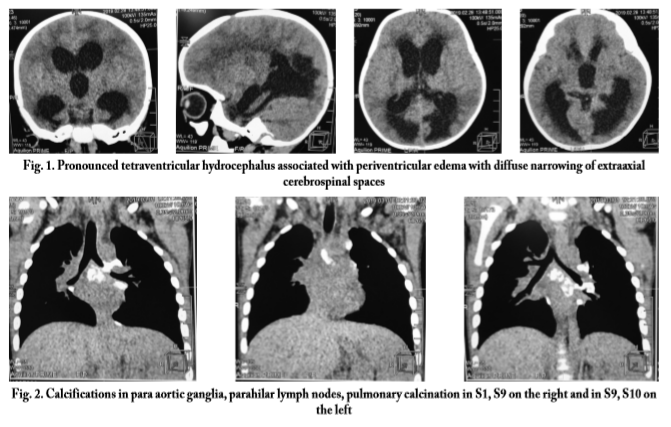 For 6 months, the patient presented psychasthenia and was consulted by the psychiatrist, and 4 months before the occurrence of the abovementioned symptoms the patient was admitted to the intensive care department of Hospital of Mother and Child Health Care with abdominal pain, subfebrility, weakness, loss of appetite, nausea, repeated vomiting, enlarged abdomen. For diagnostic purposes, laparoscopy was performed. Were removed 3 liters of serum fluid. The result of histopathological examination: fragments of muscle tissue and connective tissue with venous congestion, focal hemorrhages by diapedesis, and miliary necrosis with discrete macrophagal cell reaction. Regretfully, the presence of miliary necrosis did not alert the surgeon for a more detailed examination of the patient.
Neurological status at admission: Glasgow 10 p, cranial nerves – no pathological signs, motor deficit – absent, osteotendinous reflexes D = S, exaggerated, present bilateral planar clonus, pronounced meningian signs, instability in Romberg position, intentional tremor. Chest X-rays showed signs of acute respiratory disease. In 2 days the condition of the patient worsens: Glasgow Scale – 8 points, pronounced headache, febrile, toxic syndrome, pronounced neck stiffness, positive meningial signs. A preventive diagnosis has been established: acute meningoencephalitis of unknown etiology. The following examinations were performed: negative influenza virus samples; CSF: citosis 77, neutrophils – 56, protein – 1.68 g / l, glucose – 0.6 mmol / l. Antibacterial treatment with Cefotaxime and anti-emetic therapy (according to the national clinical protocol) was indicated. However, the condition of the patient is getting worse. Due to levels of protein and low glucose levels determined in the CSF, a consultation of the TB specialist, excluded the diagnosis of tuberculous meningitis (despite of lack of specific examinations for tuberculosis). It is suggested – viral meningitis and recommended – Aciclovir. However, the condition of the patient continues to worsen. The third lumbar puncture (over 8 days from admission) was performed: Pandi +++, citosis – 605 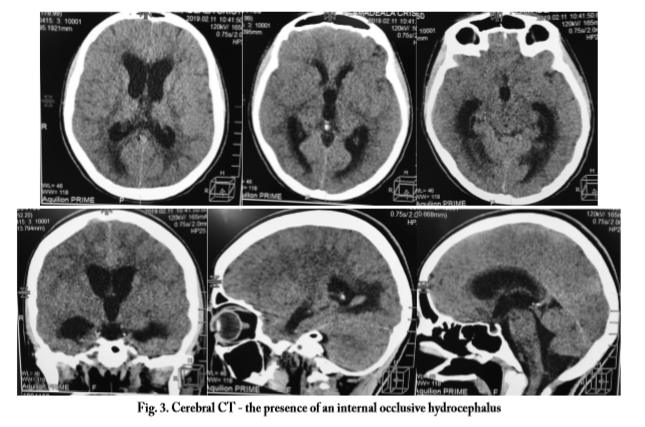