Background: Acute inflammatory demyelinating polyneuropathy (AIDP) is the most common cause of flaccid paralysis in the world and is one of the major neurological emergencies. The incidence of this disease in different countries varies from 0.89 to 1.89 per year cases/100.000. Usually, AIDP is triggered by a viral or bacterial infectious process. Acute disseminated encephalomyelitis (ADEM) is a nonvascular inflammatory demyelinating pathology of the central nervous system characterized by diffuse neurologic signs and symptoms. The annual incidence is 1.5-3 / 100.000. ADEM usually starts after a febrile illness or after immunization.

Aim: to describe the diagnostic features and the differential diagnosis of AIDP and ADEM based on two clinical cases.

Material and methods: two clinical cases were studied: a child (3.5 years) with AIDP and a child (age 5 years) with ADEM. Clinical and neurological examination was supplemented by laboratory investigations that included: CSF examination, immunological assessment, ENMG, brain and spinal MRI.

Conclusions: Several pathologies take acute flaccid paralysis, which is difficult to diagnosis, because of clinical manifestations. In the present study we noted that AIDP is characterized by symmetrical and ascending flaccid paralysis, and ADEM – asymmetric paralysis. The confirmation of the diagnosis requires requires more investigations (neurophysiological, neuroimaging, etc.). A correct therapeutically approach supported the patient to recover.

Acute inflammatory demyelinating polyneuropathy (AIDP) or Guillain Barre syndrome (GBS) is the most common cause of flaccid paralysis in the world and is one of the major neurological emergencies. The incidence of this disease in different countries varies from 1-3 per year cases/100.000. Usually, AIDP is triggered by a viral or bacterial infectious process. The antibodies directed against the gangliosides from microorganism’s structure can cross-react with the gangliosides from myelin structure and nerve fibers, forming autoantibodies. They will lead to autoimmune destruction of myelin by blocking nerve impulse conduction, which will develop paralysis and areflexia of tendons.

Aim: to study the clinical, electrophysiological, neuroimaging and immunological damages of the nervous system in the children with AIDP by studying clinical cases hospitalized in the neurology clinic of the Institute of Mother and Child, Chisinau.

Material and Methods: during the years 2010 – 2014 were investigated 23 children (boys – 13 girls – 10) aged between 3 and 18 years who presented peripheral paresis. The children were divided into 2 groups: 13 children (boys – 7 girls – 6) with AIDP (group I), 10 children (boys – 6 girls – 4) with other types of paresis (group II). All patients were examined by clinical examination (general and neurological) and by biochemical, bacteriological, virological and immunological tests, lumbar puncture with CSF examination, neurophysiological examination (EMG) and neuroimaging (brain and spinal MRI).

To achieve our aim and objectives of the study it was developed a questionnaire for examination the patient with polyneuropathy to facilitate the statistical study. The medical record included general data (passport data, personal history of disease), positive and negative assessment of neuropathic symptoms shown by the child or caregivers, disease history, somatic status, neurological examination scale of muscle strength as Medical Research Council (MRC), performed laboratory tests, the results of electrophysiological and imaging research.

It was studied the negative neuropathic symptoms, which included the following signs: weakness of the limbs, difficulty walking, static and walk instability. Similarly, we studied and positive symptoms, which included the following symptoms: neuropathic pain, sensations of numbness, tingling or stinging, muscle cramps, fasciculation etc. We looked cautiously the first manifestations of the disease: age of onset of the disease, the first symptom installed, interrelation with a possible trigger (acute viral infections and the presence of intestinal bacterial presence).

The neurological examination was focused on depth study of motor and sensory system. It was graduated the muscle weakness according the extensive scale MRC (Table 1). We appreciated the strength of different muscle groups, such as mimic muscles, flexors and extensors of the neck, the upper and the lower limbs. It was considered pathological weakness in detecting asymmetry in at least two different muscles when the gap was at least a degree MRC scale. The presence of muscle weakness in the forearms, legs, hands and feet were considered distal and proximal weakness presence was deemed to install it above the elbow and knee. 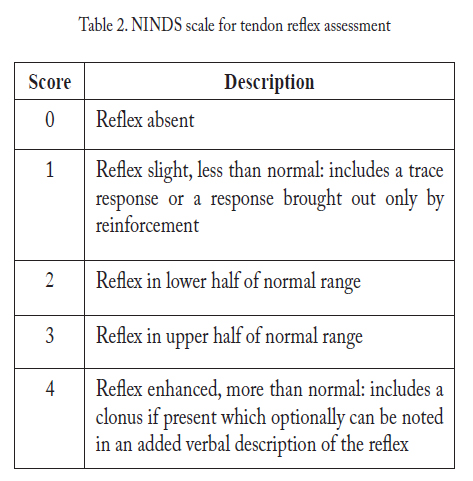 The deep tendon reflexes were graded according to the National Institute of Neurological Disorders scale and Stroke (NINDS) (Table 2). 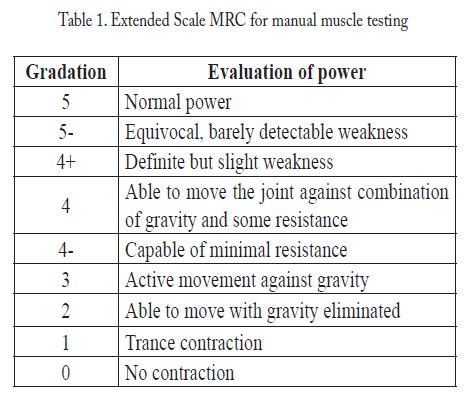 Similarly, it was examined the superficial and deep sensitivity according to existing the traditional techniques in neurology.

The electrophysiological investigations were performed at the Institute of Neurology. It was performed the stimulodetection examination, completed with motor evoked potentials and electromyographic examination.

In 19 patients studied was performed the magnetic resonance imaging examination. It was studied the presence, the location, the number and the size of foci in white matter, damage or presence of other pathological foci.

We analyzed the particularities of evolution of the disease and the effectiveness of immunomodulatory therapy administered.

By analyzing the history of disease it was noted the antecedents in most patients. 10 patients were referred to an acute infection of the airways, supported by 2-3 weeks before the installation of neurological manifestations. 3 patients suffered from a febrile state associated with gastrointestinal symptoms, including diarrhea. The clinical assessment of the children in group I have found that 13 children had post-infectious onset preceded respiratory symptoms (10) and gastroenteritis (3).

At the majority of examined patients it was diagnosed negative symptoms. All patients noted difficulty of walking, in 12 cases (92,3%) the walking was impossible. In 12 patients (92,3%) we found weakness in hands and feet, 1 patient (7,8%) – only weakness in the muscles of the lower limbs, 2 patients (15,6%) – weaknesses in the mimic muscles. 2 patients (15,6%) had difficulties in walking not only because of weakness, but and of instability. The breathing difficulties were presented in one child (7,8%). One case presented dysphonia, dysarthria, dysphagia. In 7,8% of cases (1 patient) were found sphincter disorders. 7,8% of patients (1 patient) had eyelid ptosis and oculomotor disturbances.

The positive symptoms were present in 10 cases (77%). The severe pain was reported by 2 patients (15,6%) as pain along the spine irradiation in hands and feet. A feeling of numbness, tingling, prickling presence in the limbs were recorded in 5 children (38,5% cases), in most cases initially in the feet (46,5%), then in the hands (23,5%). The cramps presence was recorded to 2 children (15,6%), 2 children (15,6%) reported muscles twitching in the limbs. The diplopia was present in 1 child (7,8%). 1 child (7,8% cases) were present involuntary movements in the muscles of the hands – athetosis. In one child (7,8%) was found trembling in the limbs. The symptoms registered in children studied are shown in Table 4. 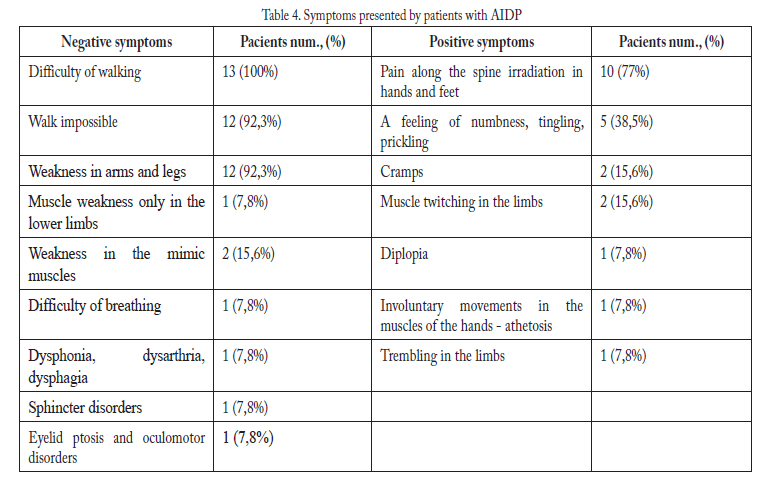 Thus, the children in group I of the study were exposed to a physical examination evolution. In 10 children (77% cases) the disease started with sensory disorders. 5 children had leg numbness, burning and stinging sensations in them. The pains were present, most often along the spine irradiating in the feet- in 10 children. In 7 cases the weakness started in the legs, in two cases – mimic muscle weakness. The evolution of the disease was monophasic in most of the cases (13 children). After a further progression of clinical events lasting from a few days to 8 weeks, it was attended the plateau phase, then the phase of the regression of clinical manifestations. In 2 cases (15,6%) was determined a recurring trend. The cranial nerve examination was performed. Pathological changes were obtained in 2 children (15,6% cases). The most commonly found facial nerve damage with the presence of mimic muscles weakness (muscle strength assessed by 1 and 4 points). The unilateral impairment of mimic muscles was assessed in 1 child (7,8%). The bulbar syndrome (dysphonia, dysphagia and dysarthria) was appreciated in 1 child (7,8%). In 1 child (7,8%) was present respiratory failure. The abolition of the pharingeal reflex was found in 1 child (7,8%). In 1 child (7,8%) was determined eyelid ptosis and limitation of eye movements in 1 child (7,8%).

In all children it was studied the motility. In the children in group I of the study were assessed the following changes: weaknesses in the limbs – in 13 children (100%), walk disturbance – 12 children (92,3%), abnormal coordination with balance disorders – 2 children (15,6%), instability in the Romberg test – 2 children (15,6%). The significant decrease in muscular strength according to the scale MRC was determined by the majority of children, decreased muscle tone – to 12 children (92,3%), the absence or reduction of symmetrical deep tendon reflexes (achilles and patellar reflexes) – in 13 children (100%). The tactile sensitivity disorders were assessed in all children, hypoesthesia as “socks” and “gloves”. The vegetative disorders were determined in 9 children (69,2% cases), of which tachycardia – in 6 children (46,2%), sphincter disturbances – in 1 child (7,8%).

In the children in group I and II of the study were observed the following clinical, neurofunctional and imaging manifestations presented in Table 5, 6, 7.

Clinical case 1. A 3.5 years old child was admitted to the clinic of neurology of IMC for the following complaints: motor deficit, pain and sensitivity disorders in the upper and lower limbs, facial asymmetry, convergency disturbance, balance disorder, irritability. The history of the disease: the clinical manifestations have started a few days ago when after a flu-like illness, the child have emerged pain in the legs, with ascending character, that in 3-4 days involving all muscle groups of the lower limbs. The clinical symptoms progressively worsened until the motor deficit and upper limb involvement. The history of life is with no particularities, being a child of the first pregnancy, first birth, which went without pathology. Until the present illness he did not present any health problems. He was developed according to chronological age.

Case 2. A child (girl) aged 5 years presented with complaints: headache, fever, severe pain in the muscles of the lower limbs and right upper limb, inability to walk and sit, apathy. History of the disease reveals that the child is sick for 2 weeks, primary underwent a follicular angina, treated with antibacterial drugs 7 days. There was a quiet period of clinical signs. After five days the state worsens when the girl began to present a pain in legs, especially in the right limb and spine. She was admitted to the District Hospital. The worsening status- pain and muscle weakness in upper right limbs, over two days the child is transferred to the intensive care department, IM and C, Chisinau. The history of life: first pregnancy, first birth, which went without pathology. The medical history: atopic dermatitis from the first month. The last half year- 2 catarrhal angina episodes. The neurological examination revealed drowsiness, speech slowness, axial and limb muscles hypotonia Right< Left, decrease of deep tendon reflexes Right< Left. The laboratory investigations : ENMG (without modifications), brain and spinal MRI showed diffuse medullar changes with local swelling of spinal horn (more pronounced in the C3 – Th2 ) and multiple diffuse demyelinating supra and infratentorial intracerebral foci.

The established diagnosis: acute disseminated encephalomyelitis, cerebrospinal form (spinal shock phase). It was administered corticosteroids, symptomatic treatment. The patient had a favorable outcome with partial recovery of motor function during 3-4 weeks after onset. 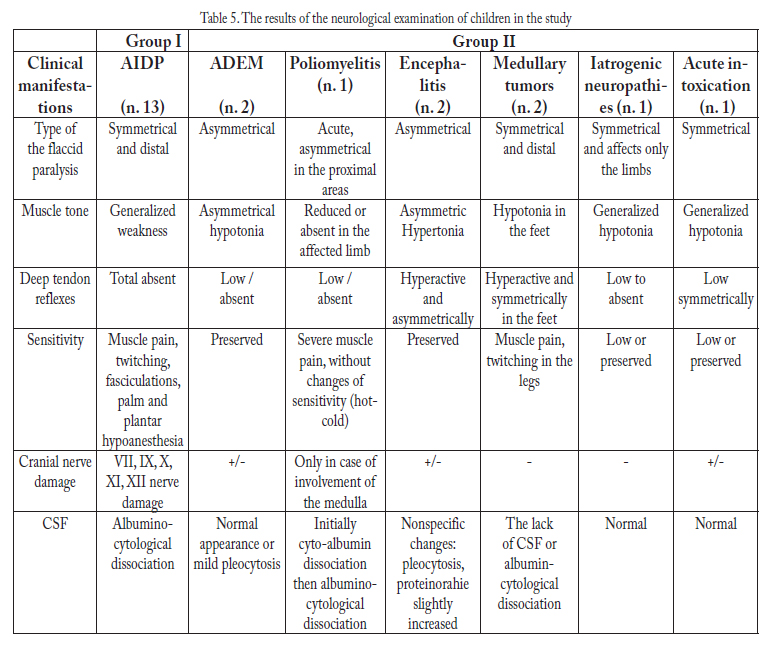 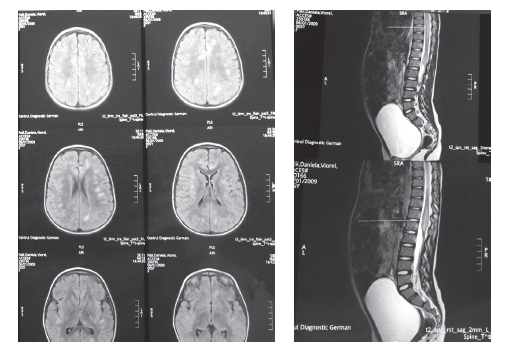