Thoracic outlet syndrome (SyTOS) as a result of specific anatomic-vascular structures of the upper aperture of thorax and the modern way of life which causes compression in the muscles of the cervical region and reduced circulation of the region. Due to difficult diagnosing of TOS it is necessary to establish multidisciplinary diagnostic approach, as well as combined therapy.

Throacic outlet syndrome (TOS) is a symptom complex characterized by pain, parasthesia, weakness, an discomfort in the upper limb which is aggravated by elevation of the arms or by exaggerated movements of the head and neck (Lindgren and Oxala, 1995).

Thoracic outlet syndrome (Sy TOS) can cause much serious complication as the result of the specific changes anatomic-vascular structures of the upper ap-erture of thorax. The muscular structures which are in-volved in TOS: the scalene triangle which is bordered by the anterior scalene muscle anteriorly, the middle scalene muscle posteriorly, and the medial surface of the first rib inferiorly, the costoclavicular triangle, which is bordered anteriorly by the middle third of the clavicle, posteromedially by the first rib, and pos-terolaterally by the upper border of the scapula and the subcoracoid space beneath the coracoid process just deep to the pectoralis minor tendon. The most af-fected neurovascular structure are the brachial plexus (95%), subclavian vein (4%), and subclavian artery (1%). Some provocative maneuvers can provoke com-pression of neurovascular structure and reduce circu-lation in the cervical region and arms. Also, anoma-lous structures, such as fibrous bands, cervical ribs, and anomalous muscles, tumors at the top of the lung (Pancost tumor) may constrict this triangle further. Repetitive trauma to the plexus elements, particularly the lower trunk and C8-Th1 spinal nerves, is thought to play an important role in the pathogenesis of TOS.

Symptoms of TOS include: pain (in neck, shoulder, and arm), numbness, paresthesias in the fingers and hand, headache, weakness, loss of dexterity or im-paired circulation to the extremities (causing discol-oration, hand coldness, Raynaud phenomenon, swell-ing of the arm, cyanosis). Also, sometimes stenocardia can occur. Often symptoms are reproduced when the arm is positioned above the shoulder or extended. Pa-tients can have a wide spectrum of symptoms from mild and intermittent, to severe and constant.

The aim of our study was to establish most ef-fective diagnostic procedures and physical treatment techniques for treating TOS.

Diagnosis ofTOS is clinical and based on a detailed history, subjective and objective examination of neuro-vascular and musculoskeletal systems of the neck, shoul-der, arm and hands (Roos, 1982; Novak et al., 1995). The literature laments that there is no one test or investiga-tion that consistently proves the diagnosis ofTOS. Given that TOS really is a “collection” of symptom complexes, often multifaceted, it is unreasonable to assume that any one test or one investigation can always accurately ex-amine the whole spectrum of pathology.

Diagnosis of TOS is dependent on a systematic, comprehensive upper-body examination and several authors highlight that postural exacerbation of symp-toms is an essential component of the diagnosis (Roos and Owens, 1966; Novak et al., 1995).

Patients should have at least three of the following four symptoms or signs. 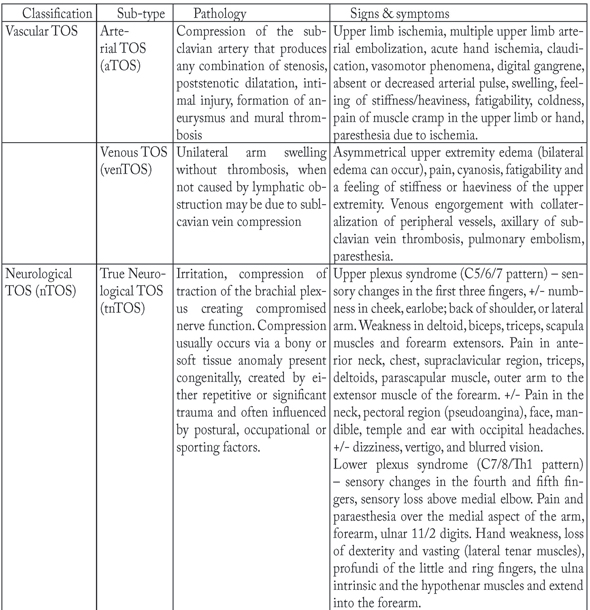 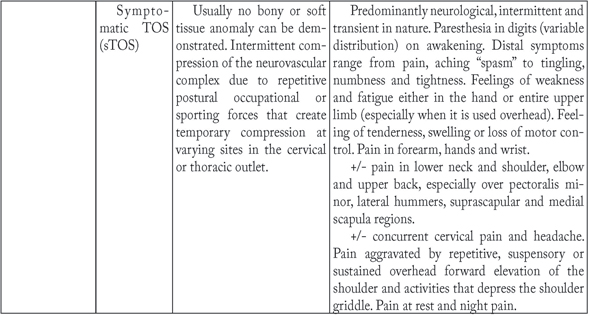 Retrospective/prospective study conducted in Special Hospital for Rheumatic Diseases Novi Sad from 2006 to 2010. Standard diagnostic methods which were used: dopplersonography (standard DCA and TDC), oscillography and X-ray of cervical region.

We have examined 100 patients (50 male, 50 female), aged 20-60. The first group of 50 patients (25 male, 25 female) were undergone the ultrasound (US) treatment and kinesitherapy treatment in a period of 28 days. The second group of 50 patients (25 male, 25 female) were undergone only to US treatment, without kinesitherapy. US intensity in both groups was strictly 0.8W/cm2, 5,0 minutes duration for each patient. Kinesitherapy was consisted of list of exercises according to Regan for cervical spine avoiding those containing provocative posi-tion of upper limbs. Kinesitherapy All the patients have been ergonomically educated and were subjected to a complete neurological and physiatrist examination. They also had indicative radiological imaging of the cervical region, oscilography and dopplersonography.

At the end of the treatment period of 28 days pa-tients were obliged to complete standardized answer sheet where they were supposed to answer on several questions related to their condition and possible symptoms at that moment.

During the neurological examination we found a rare deficiency of the motor function, but more fre-quently the deficiency of the sensitive function was observed, which was localized mostly on the inerva-tion area of root C8-Th1. This could be explained by the effect of the anomalous structure on the nearby root of the nerves. All patients had positive provoca-tive tests (Adson’s maneuver-the patient’s arm was down by the side, and the head was turned towards the affected side; Halsted maneuver- the patient was instructed to assume a military posture, with shoul-ders backward and in a downward direction; Wrighfs hyperabduction test- with the shoulder hyperabduct-ed to 180 degree and elbow flexed; the Root test (elevated arm stress test- EAST)- the patient sits with the arms abducted 90 degrees from the thorax and the elbows flexed 90 degrees, then opens and closes the hands for 3 minutes.). During provocative maneuvers of the arm and neck produced symptoms and blood vessel “pinching” causing a loss of pulse. Root’s test was shown as the most reliable screening test for the evaluation of TOS. All patients had indicative radio-logical imaging of the cervical region, which pointed to the hyperplasia processes transverses VC7 bilateral or cervical ribs. Results of oscillography of upper ex-tremities were also positive in all patients. This could be explained by the methodlogy of performing of os-cillography- patients were in a provocative position during the oscillography procedure and a significant reduction of blood flow was recorded.

Table 1. represents symptom probability in rela-tion to sex. Neck pain occurred in 84% female and 74% male patients. Shoulder pain was present in 60% female cases, and 56% male. Upper limb pain which propagated along the extremity was positive in 76% of female, and 54% male patients. Representation of headache was in 52% female, and 20% male patients.

Paresthesia in fingers was common symptom in 66% of female, and 36% male of patients. 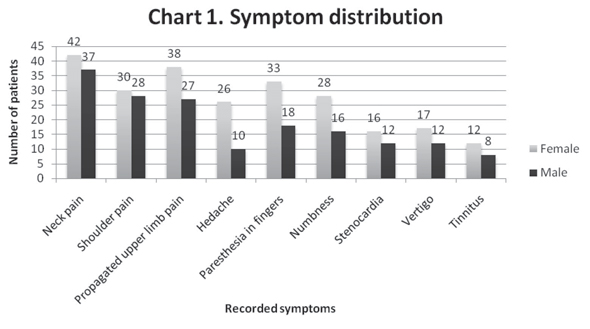 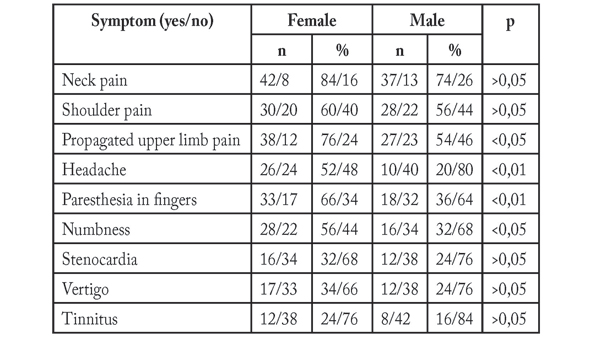 For all patients standard DCA and TCD were performed. Analyzing the results of DCA we found that there was no significant statistical difference (Fisher test, p>0,05) between both gender. This results could be explained as a disadvantage of standard procedure of DCA and TCD, which means that patients were in a sitting position with hands relaxed hanging down without any provocation. In this position the neurovascular structures were not affected, so the possibility of recording positive results was rare.

TOS as a result of specific anatomic-vascular structures of the upper aperture of thorax and the modern way of life which causes compression of the muscles of the cervical region and reduced circulation of the region. Due to complexity of TOS it was nec-essary for us to standardize the diagnostic criteria and therapy techniques that we intended to use over both examined groups. Diagnosis of sTOS is dependent on a systematic, comprehensive upper-body examination and several authors highlight that postural exacerba-tion of symptoms is an essential component of the diagnosis (Roos and Owens, 1966; Novak et al; 1995).

According to classification of TOS and common symptoms in different types of syndrome patients should have at least three of the following symptoms: a history of aggravation with the arm in an elevated position, a history of paraesthesia originating from the spinal segments C8/Th1, supraclavicular tender-ness over the brachial plexus and a positive hands up abduction/external rotation or stress test (Clinical index for diagnosis of sTOS; Lindgren, 1997).

The most common symptom within both groups was neck pain followed by shoulder pain and propa-gated upper limb pain. Our findings match with the findings of other authors (Malas and Ozckar, 2006.) who said that less commonly seen are symptoms of tachycardia or pseudoangina, occipital headache, ver-tigo, dizziness, and tinnitus.
Statistical significance does not exist (p>0,05) among sexes for the following symptoms: neck pain, shoulder pain, stenocardia, vertigo, and tinnitus. For the rest of the symptoms: propagated upper limb pain (p<0,05), headache (p<0,01), paresthesia in fin-gers (p<0,01) and numbness (p<0,05) there is certain significance in favor of female gender. That could be explained due to female precision and descriptiveness in describing their symptoms.

During physical examination we found that poor posture ( long neck and sloping shoulders) was pres-ent with hypotrophic muscles of shoulder region in great majority of examined patients, and that agrees with the findings of several independent authors (Kai et al,.2001; Pascareli and Hsu, 2001).

Provocative tests are purported to help delineate the possible level of compression of the neurovascu-lar structures in either the scalene, costoclavicular or axillary (sub-coracoid) intervals. Given the numerous possible causes and symptoms associated with TOS, no single test can unequivocally establish the presence or absence of the condition, particularly where sTOS is concerned (Roos, 1982; Lindgren, 1997). No study to date has analyzed the specificity, sensitivity and predictability of the provocation tests in relationship to the separate categories of TOS.

All patients had positive X-ray in which could be observed either cervical rib or procesus transversus hyperplasia.

Also, there is no study that deals with definition and differences between hyperplasia and complete cervical rib, and it is left to radiologists and practitioners to analyze and describe the findings on their own opinion.
If we take a look at dopplesonography results either DCA or TCD, it is possible to draw a conclusion that there is no significant difference between both techniques in both groups due to lack of provocative position.

Oscilography examination was positive in case of all patients. We were guided by the recommendation that change in amplitude of oscillation by one third was considered a positive result.

At the end of the predicted therapy time in length of 28 days all patients within both groups were obliged to fulfill unique answer sheet on which they described their condition, presence or absence of symptoms and their severity.

They were able to give a general impres-sion of how they were feeling at that moment, and to give a descriptive evaluation in terms: “much bet-ter”, “better”, “unchanged” and “worse”. It is possible to conclude that there is no evident difference among gender groups and therapy groups within same gen-der. In general, patients said that they were feeling much better or unchanged which can be explained by duration of symptoms. Chronic pain/problems should be treated more continuously to make expected better effect.

For diagnosing TOS, beside clinical evaluations and performing provocative maneuvers, radiological imaging and oscillography shown as a good indicator for diagnostic Sy TOS. Classical methods of doppler-sonography could not be a reliable indicator to diagnose Sy TOS, so we proposed to use dopplersonogra-phy methods in the provocative position to diagnose Sy TOS.

The multidisciplinary diagnostics (neurologist, physician and radiologist) is necessary for discovery of syndrome TOS. Primarily, conservative method should be applied with regular kinesitreatmet and er-gonomic education.