SUMMARY
Actuality: Intracranial hypertension (IH) is a rare syndrome in children, which may be associated with headache (in older children). In younger children the clinical symptoms of intracranial hypertension are obscured due to age particularities. One of the causes of IH in children are brain and cerebellar tumors. Th e purpose of the study was determined by the retrospective analysis of IH signs in children who were confi rmed to have brain tumors. Methodology of the study: Th e study included 27 children aged 0-16 (girls – 11, boys – 16) who were diagnosed with brain tumors. Th e diagnosis was confi rmed by imaging examinations (2014-2018). Th e research criteria were the age of the child, as well as the early symptoms of brain tumors. Results: In younger children (up to 3 years): sleep disturbances, behavior disturbances (lachrymosity) and vomiting were among the fi rst symptoms of brain tumors, and in older children (3 years and older) headaches, nausea and vomiting. Th e most aff ected age – 10 and 14 years, followed by those between 5-9 years, then the children of 0 to 4 years. Conclusions: Children are at an increased risk of developing brain tumors. One of the cardinal syndromes of brain tumors in children is IH, accompanied by headaches, vomiting, nausea, vision changes, behavioral disorders, convulsions, etc. In older children, IH syndrome has non-specifi c manifestations, so any changes suggestive of a brain tumor require further examination. Ophthalmoscopy, a basic exam for identifying IH in young children, is oftentimes not suggestive. Suspicion of a cerebral tumor requires the examination of a child of any age through cerebral imaging. Key words: intracranial hypertension, brain tumors, child

ACTUALITY Intracranial hypertension (IH) is a rare syndrome in children, which may be associated with headache (in older children). In young children the clinical symptoms of IH are obscured due to age particularities. In general, IH is a major pediatric emergency and can lead to significant morbidity. In order to reduce morbidity coefficients, it is important to address appropriate patient behavior, including: elucidation of IH etiology, confirmation of early diagnosis and effective management. Among the objectives established in the child’s examination we quote the following: headache monitoring, neurological and ophthalmic examination, cerebral imaging and lumbar puncture. IH management should be coordinated with the neurologist, ophthalmologist or neuro-ophthalmologist. IH syndrome in children
may be primary (idiopathic IH), or may appear as an expression of an identifiable secondary cause. One of the causes of IH in children is cerebral and cerebellar tumors. In the Republic of Moldova the incidence of cerebral tumors in children is 1.74 – 1.9 / 100.000 and cerebellar tumors – 1.54 / 100.000. The data from specialized literature suggests that in over 50% of children diagnosed with brain tumors, the signs of IH are absent, at the beginning of the disease. In addition, IH syndrome in children with cerebral tumors is installed gradually. The most important signs of IH are: headache, visual disturbances, nausea, vomiting, further evolving towards loss of consciousness. The purpose of the study was determined by the retrospective analysis of IH signs in children who were confirmed to have cerebral tumors.
METHODOLOGY OF THE STUDY
The study included 27 children aged 0-16 (girls – 11, boys – 16) who were diagnosed with brain tumors. The diagnosis was confirmed by imaging examinations (2014-2018). The research criteria were the age of the child, as well as the early symptoms of brain tumors.
RESULTS
In younger children (up to 3 years): sleep disturbances, behavior disturbances (lachrymosity) and vomiting were among the first symptoms of brain tumors, and in older children (3 years and older) headaches, nausea and vomiting. Clinical manifestations were displayed in the following order (figure1): 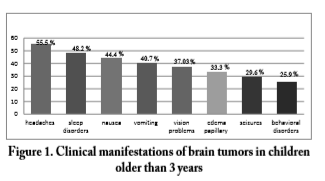 In children with hemisphere and cerebellar vermis tumors, these symptoms were associated with other types of clinical manifestations (Figure 2). 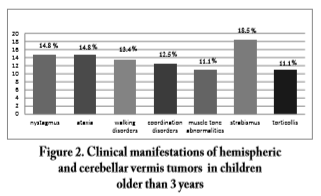 In brain stem tumors – signs of dysfunction of the cranial nerves, and in cerebral hemispheres – convulsions, motor and sensory disorders. The most affected age – 10 and 14 years, followed by those between 5-9 years, then children aged 0-4. Through their histological affiliation, brain tumors were divided into several groups: medulloblastoma – 40%, anaplastic astrocytoma – 25%, glioblastoma –
10%, anaplastic ependymoma – 7%, other tumors – 18%. DISCUSSIONS Intracranial hypertension (IH) is a rare syndrome in children, which may be associated with headache (in older children) [1]. In young children, the clinical symptoms of IH are obscured due to age particularities. Intracranial hypertension can cause pronounced morbidity because it is rarely encountered and practitioners can easily overlook it. To reduce the morbidity rate, early diagnosis is important and also the correct therapeutic approach of the patient, which includes: the elucidation of the etiology of IH, the confirmation of the early diagnosis and the effective management. Among the objectives proposed in the examination of the child we mention the following: headache monitoring, neurological, ophthalmological examination, examination by brain imaging and lumbar puncture.
The management of the child with IH should be coordinated with the neurologist, ophthalmologist or neuro-ophthalmologist [2]. Intracranial pressure (IP) is the pressure in the intracranial space relative to the atmospheric pressure. IP is rarely constant and is normally subjected to substantial individual variations and physiological fluctuations, for example, posture change, strain and cough [1,2]. Also the intracranial pressure increases under the influence of different pathological mechanisms, causing IH.
The first description in literature of intracranial hypertension in 1897 belongs to Quincke, in a patient with severe meningitis. From this first publication, a myriad of terms have emerged that refer to IH: toxic hydrocephalus, otogenic hydrocephalus, cerebral pseudotumor, benign intracranial hypertension, idiopathic intracranial hypertension, pseudotumoral cerebral syndrome. Today the most commonly used terms are: pseudotumor cerebri and idiopathic intracranial hypertension. But the term cerebral pseudotumor becomes confusing when the cause of IH is established, which is why the term primary (PIH) and secondary (SIH) is preferred. The diagnosis of PIH is established when no causative agent has been established for IH and replaces the term idiopathic intracranial hypertension, pseudotumor cerebral syndrome. Risk factors for PIH are considered: female gender, postpubertal status, obesity, polycystic ovary syndrome, but these factors do not have a direct influence on IH [3]. The term SIH refers to cases when IH results directly from other causes. The most common cause of SIH is sinus thrombosis [4], constitutes 11% of the etiology of SIH and can be caused by numerous pathologies, including brain tumors. Because cerebrospinal fluid is absorbed into the venous circulation, the increase in venous pressure results in decreased reabsorption, which causes increased intracranial pressure [5]. Older studies have shown that intracranial pressure depends on the age of the child. Children up to 8 years of age have cerebrospinal fluid pressure at lumbar puncture (LP) equal to or less than 18 cmH2O, and for children over 8 years cerebrospinal fluid pressure at LP equal to or less than 25 cmH2O and is similar to adults [4, 6]. Intracranial pressure in children is traditionally divided into the prepubertal and pubertal age categories. Those who have entered or have completed puberty have the same risk factors as adults. Studies have shown a distribution of IH close to 1: 1 of female and male in prepubertal patients, compared to the 4: 1 ratio observed in adults [7]. In 2 separate studies, obesity has not been shown to increase the risk of IH in prepubertal patients. Examination of pediatric patients in a large Intracranial Hypertension Registry (joint project of the Intracranial Hypertension Research Foundation and the Casey Eye Institute at Oregon Health & Science University; USA), found significantly higher Body Mass Index (BMI) (30.7 kg/m2 vs. 21.6 kg/m2) in postpubertal patients with IH compared to their prepubertal patients [8]. The modified Dandy criteria that correspond to IH in adults have been reviewed and adapted to pediatric patients and to cases where papillary edema is missing by Friedman et al. [9]. These criteria stipulate that patients have: 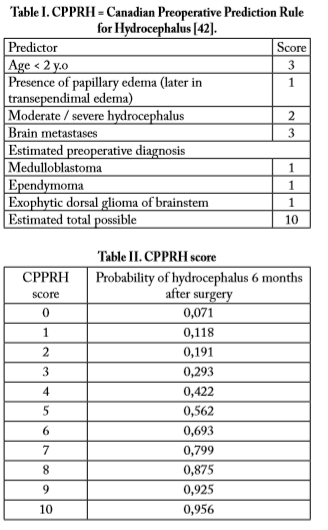 Hydrocephaly is associated with the gradual destruction of the periventricular white matter leading to a disconnection syndrome. Under immature brain conditions, hydrocephalus also interferes with developmental processes, including cell genesis and myelination [43]. Progressive ventricular dilation, where shunt therapy with Endoscopic third ventriculostomy (EVT) or ventriculo-peritoneal shunt (VPS) is probably required, may be used to temporarily protect the brain prior to shunt. None of the non-surgical therapy has been shown to be effective in resolving hydrocephalus, despite multiple studies conducted over the past five decades [44]. Posterior reversible encephalopathy syndrome (PRES) is a clinical-neuro-radiological entity that involves the posterior cerebral fossa, including the occipital and parietal lobes [21].The syndrome is characterized by headaches, altered mental status, seizures and vision disorders. Although the pathogenesis remains unclear, the cause of this syndrome may be endothelial dysfunction. In most cases, PRES is resolved spontaneously, and patients have both clinical and radiological improvement. In severe forms, PRES can even cause death, as a result of acute bleeding or massive edema of the posterior fossa causing obstructive hydrocephalus or compression of the brainstem. Early identification, active and appropriate treatment is very important. Studies have shown that prognostic value in cerebellar tumors has: tumor localization, histological classification, degree of tumor resection, and the age of the child does not influence the outcome , [45, 46].
Previously it was assumed that one of the causes of Posterior Fossa Syndrome is local postoperative cerebral edema that is maximal at two hours, but persists for three days postoperatively with the development of IH. Posterior Fossa Syndrome or its subtypes, “Cerebellar” mutism with Subsequent Dysarthria (MSD) occurs quite frequently in children after posterior fossa interventions, occurs in approximately 13% – 29% of cases. The etiology of Posterior Fossa Syndrome is largely unknown. C. Catsman-Berrevoet et al analyzing 42 cases of MSD reached the conclusion that it is installed after the removal of the medulloblastomas with a diameter of over 5 cm [47].
Previous studies have suggested that it may be related to transient disturbances in the cerebellum-thalamocortical pathways. The specific changes associated with Posterior Fossa Syndrome revealed in Technetium-99m-99mHMPAO SPECT brain perfusion models in previous studies could not be confirmed in a recent prospective study [48, 49]. Also, no causal link between PFS and hydrocephalus has been established. In patients with PFS there were no characteristic changes in pre- or postoperative MRI, except for lesions in the cerebellum. In contrast, at Technetium-99mHMPAO-SPECT scan in all children with Posterior Fossa Syndrome, a bilateral basal fronto-temporo-occipital cerebral hypoperfusion was observed, with a relatively less marked perfusion decrease in the fronto-parietal convexal cortex, but in children who did not develop Posterior Fossa Syndrome cerebral hypoperfusion was not registered. With PFS resolution, cerebral hypoperfusion also decreased. Hydrocephaly was not associated with PFS. [50]. IN CONCLUSION Children have an increased risk of developing brain tumors, and about 59% are located in the cerebellum. Due to age particularities, symptoms of intracranial hypertension in children are rarely manifested, although hydrocephalus is associated with 57% of posterior fossa tumors. Intracranial pressure depends on the child’s age and is traditionally divided
into the prepubertal and pubertal age category. One of the cardinal syndromes of cerebral tumors in children is intracranial hypertension, accompanied by headaches, vomiting, nausea, visual changes, behavioral disorders, seizures, etc. In young children, IH syndrome has nonspecific manifestations, so any changes that suggest a brain injury require further examination. Ophthalmoscopy, the basic examination for intracranial hypertension identification in young children, is often not suggestive. Suspecting a cerebral volume expanding process requires examination of the child of any age by brain imaging (CT and / or MRI). Because the prognosis is directly proportional to the rate of early detection, we always have to consider central nervous system tumors in the differential diagnosis in children with headaches, vomiting, lethargy, ataxia, visual changes, seizures, torticollis, nystagmus, etc. Early detection of central nervous system tumors ensures healing in 70% of cases.