Epilepsy is the second rated neurological disorder in the world with over 50 million patients and about 2 million new cases each year. One third of the epileptic patients are pharmaco-resistant. Th us, vagal stimulation becomes a viable treatment option which allows for better control of the frequency of the seizures, as well as an improvement in the quality of life in patients diagnosed with this condition.

The increased frequency of cases of epilepsy, as well as the resistance of many of them to antiepileptic drug therapy have led to the emergence of new therapeutic solutions.

National Health Interview Survey – USA points out in a study conducted between 2013 and 2015 that one in three adults diagnosed with epilepsy are not hospitalized nor do they present themselves for a specialty annual consult.

One third of patients diagnosed with epilepsy are pharmaco-resistant and continue to experience epileptic seizures despite the administration of proper antiepileptic medication resulting in a high degree of disability and morbidity.

Patients in this category have the option of implanting a vagal nerve stimulator or having microsurgical resection of the epileptic outbreak.

Medical statistics from the USA and Western European states indicate the implantation of VNS as being the predominant therapy in cases of pharmacoresistant epilepsy.

According to the guidelines of the Romanian Society of Neurology, the diagnosis of epilepsy is established by the neurologist, based on clinical confirmation of at least 2 epileptic seizures supported by standard or specialized EEG and cerebral imaging (magnetic resonance imaging or computerized cerebral tomography). These evaluations allow the complete diagnosis to be made: certification of diagnosis, etiological framing, semiological classification of the type of seizures, determination of the degree of disability.

After clarifying these frames, the steps of the appropriate drug or surgical treatment algorithm are established.

Therapy through vagal nerve stimulation (VNS) was approved for the first time in the USA in 1997, with over 30.000 patients benefiting from this procedure.

The purpose of the intervention is to better control the seizures in terms of reducing their frequency and severity without being a curative treatment [1].

VNS may be usefull as associated therapy in patients over 12 years of age with epilepsy with partial seizures, generalized seizures and Lennox-Gastaut syndrome [2].

VNS is indicated in patients with refractory epilepsy in treatment, in patients who are not eligible for epileptogenic focal resection or in those who did not have the expected effect regarding the VNS procedure [1].

The procedure helps control seizures by: increasing blood flow in key areas of the brain and increasing the level of neurotransmitters, which results in improves quality of life for patients diagnosed with pharmacoresistant epilepsy.

The technique has the principle of stimulating the vagal nerve – the main vegetative nerve of the human body, and it involves placing a pulse generator under the skin in the upper chest area. An electrode attached to the vagus nerve on the left side of the neck connects to the impulse generator which is operating on batteries [3].

Through the electrode there are signals transmitted towards the vagus nerve which help reduce the frequency of ration of the seizures.

An important role in this therapy belongs to the magnet which the patient wears on his wrist, which has the purpose of extra-stimulation during epileptic seizures with auras.

The impulse generator is made out of titanium (like other pacemaker type of gadgets), thus avoiding an immunological conflict which might trigger its rejection by the body.

The evolution of the generator models in vagal nerve stimulation therapy [3] included: 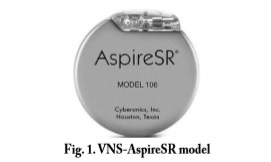 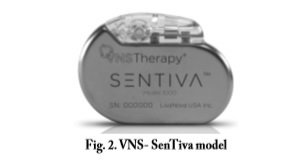 Patients diagnosed with refractory epilepsy to the treatment who associated other pathologies such as bronchial asthma or other respiratory conditions, sleep apnea, cardiac pathology, single vagal nerve are not eligible for VNS [4].

The VNS technique does not produce toxic side effects by association with drugs used in the treatment of CNS disorders.

Patients who have undergone an implantation of the VNS therapy system are not eligible for magnetic resonance imaging at the chest level, breast or abdomen.

All these studies concluded that the method leads to a statistically significant reduction in the occurrence of the seizures with reasonable and well tolerated side effects [1].

The long term effect of the vagal nerve stimulation on the quality of life in patients with pharmacoresistant focal epilepsy was evaluated in the PuLsE study, in which 112 adults diagnosed with refractory focal epilepsy to the treatment were placed in two groups: a group of patients received VNS therapy associated with drug therapy and a group of patients received only medical therapy with no VNS therapy.

The information was collected over a period of one year. The results of this study concluded that the recovery time after a seizure may be shorter for some patients, with significant differences between the groups, in favor of group 1, regarding the improvement of the quality of life and the reduction of the frequency of the seizures [6]. Approximately 6 out of 10 patients reported an improvement in the quality of their lives (less concern regarding the possible occurrence of seizures) [6]. For half of the patients, the seizures were less severe.

Another study aimed to track the progression of patients diagnosed with refractory epilepsy to treatment, following vagal nerve stimulation over a period of more than 10 years. Retrospectively 65 patients (including 29 women) who received VNS therapy for up to and over 10 years were examined. There were 44 adults (≥ 18 years old, 67.7%) and 21 children (32.3%). The frequency of the seizures was recorded before VNS and after VNS insertion at 6 months, 1 year, 2 years, and then every 2 years. The frequency of the seizures decreased by 36% after 6 months, 58% after 4 years and 75% at 10 years after the VNS placement. The study concluded that seizure control gradually improved over the years and then it stabilized [1,2].

It is noteworthy that during all this time patients were carefully treated with antiepileptic drugs and the doses were modified for each patient.

We present the case of a 44 year old patient diagnosed with childhood idiopathic epilepsy with polymorphic seizures and refractory to drug treatment: absences, motor automations, generalized tonic-clonic seizures, psychiatric intercritical disorders (episodic aggressiveness) with an increased frequency around 15-20 per month.

The patient was dispensarized in a pediatric neurology service from childhood and until 12.02.2001 receiving treatment with valproic acids and salts, in doses up to 1500 mg per day. Since 2001, she has been highlighted by the adult neurology service where, due to the persistence of a high frequency in seizures, carbamazepine is associated in the treatment in doses up to 600mg per day. The patient suffers from repeated cranio-cerebral trauma secondary to the seizures, maintaining a frequency of approximately 18 seizures per month. In this situation, a third anticonvulsant drug – levetiracetam 1500 mg/day is associated.

Due to behavioral disorders, at the indication of the psychiatrist, clonazepam 6 mg/ day is also added. The patient undergoes repeated neuroimaging evaluations: 2012- brain CT – normal aspect and 2016 – brain MRI – normal. Due to the seizures persistence despite the high doses of anticonvulsant which allowed the patient being added to the group of refractory epilepsy to treatment, she is advised in 2016 to go the Neurosurgical Clinical Hospital in Bucharest, where the implantation of a vagal stimulator is used (fig. 3, 4, 5). 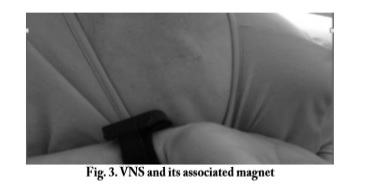 Technique: laterocervical and left infraclavicular cutaneous incision, tunneling between incisions, dissection of the vascular nervous bundle of the throat and vagus nerve where the electrodes are implanted followed by the connection to the generator, the testing of the systems, the haemostasis and suture of the anatomical plans.

Subsequently the stimuli was activated, the patient returning to the neurological dispensary.

Due to an extrapyramidal parkinsonian syndrome, valporic acid was gradually replaced with lamotrigine, the current dose being of 400 mg/day.

After the introduction of the vagal stimulation treatment, the patient is still a person with disabilities, with psychiatry disorders and autolithic tendencies, but has a significant reduction in seizure frequency – 3-4 seizures/month, maintains absences and the convulsions are generalized, but of short duration with lighter clinical manifestations.

The dose of medication has not been reduced for the moment, but regarding its evolution, anticonvulsant medications will be reduced.

DISCUSSIONS: The reduced frequency of epilepsy seizures obtained through VNS therapy often improves the quality of life in patients.

Patients involved in clinical trials of VNS therapy had a statistically significant decrease in the rate of epileptic seizures over the next 2 years after therapy.

VNS therapy reduces the frequency of seizures by at least 50% over the next period, up to over 60% of patients. Repetitive stimulation of the vagus nerve decreases the likelihood of seizures, onset seizures can be stopped by positioning the magnet above the pacemaker, generating an impulse immediately to the vagus nerve capable of suppressing an onset seizure.

In the long run, VNS appears to be a viable treatment solution especially in partial epilepsy.

Evolution of VNS therapy: the potential of this therapeutic interventionist system is much wider.

In July 2005, FDA (Food and Drug Administration) approved this therapy as a treatment for recurrent, chronic, refractory depression to treatment in patients with the age over 18 years old.

Currently it is tested for a large number of severe diseases many of them without etiological treatment until today.

On the list of conditions for which the VNS system is a possible therapeutic solution are: anxiety disorder, Alzheimer’s disease and other types of dementia, bulimia, migraine, Parkinson’s disease, tremor, cardiac arrhythmias.

In the reported case, the patient presented refractory epilepsy on a properly managed anticonvulsant drug treatment.

Despite the high dose anticonvulsant medication (and which also led to side effects – extrapyramidal syndrome following valproic acid), the patient continued to experience epileptic seizures with an extremely high frequency.

The crises have resulted in repeated cranio-cerebral trauma, which necessitated repeated neuroimaging evaluations with high cost and exposure to high doses of roentgen radiation, the patient being hospitalized many times due to these complications. These have led to a marked deterioration in the patient’s quality of life. Moreover, the frequent seizures have, over time, led to the emergence of inter-critical psychiatric disorders, leading to self-centered attempts that required associated psychiatric treatment.

The introduction of VNS treatment in this case had a significant reduction effect on the frequency of the seizures.

The patient has not subsequently suffered any risk of cranio-cerebral trauma.

VNS has been proven to be a safe and effective palliativ emethod in refractory epilepsy to treatment.

CONSENT: the patient’s consent to the personal data used in the article was obtained and recorded in the observation sheet.

All authors have equal contributions to the realization of this article.