Since 1992, ﬁbromyalgia has been recognised by the WHO as a polymorphous pathology, a disease involving the muscles and the connective tissues, with a subacute or chronic evolution and having an anxious-depressive psychic component. Semiologically speaking, the polisymptomatology of ﬁbromyalgia includes muscle pains, diﬃculties in movement: walking and physical activities, muscle cramps, insomnia and depression.

Etiopathogeny: The deﬁning causes of this disease are unknown, but, in our opinion, we agree with the most accepted concept of evolution, from the acute state to chronic one, and the present material describes the results of the most important hypothesesand research.

Physio-pathologically, inﬂammatory mechanisms are involved, leading to the ﬁberization of certain muscle groups. This change is evidenced microscopically by the biopsy of long muscle ﬁ bres. There are also neurological mechanisms that signal alterations of the sensory and pain transmission as well as a third complex of symptoms – the psychic ones: asthenia, cachexia, loss of psychomotor initiatives, insomnia and anxious-depressive states. The work is illustrated with the preferred locations of the painful areas. The treatments prescribed at present are:

— pharmaceutical ones: blocking the depression with tricyclic antidepressants, blocking the pain with analgesic drugs and nonsteroidal anti-inﬂammatory drugs;
— various physiotherapeutic and non-conventional methods.

At the same time, many aﬀected people prefer meetings in small psychotherapeutic groups constituted by NGOs involved in the treatment of ﬁbromyalgia and the ﬁght against pain.The most speciﬁc are Fibromyalgia Associations, where patients may analyse their own situations and take favourable measures.

We must point out that modern studies on thepainful pathology of connective tissues have led atfi rst to diagnoses such as chronic muscular fever ormuscular rheumatism, fi brositis and only recently fi -bromyalgia was the name given to a pathology whichexpresses itself by pains, but it has neither the biologiccharacteristics of rheumatism nor any other identifi -cation by a test specifi c to fi bromyalgia (FM). Th us,the FM diagnosis is based on clinic symptomatologyassociated with depressive symptoms.

The childhood acute febrile myalgia episodes occuras precursors of chronic FMs. It is possible thatwe are in the already known pathogenic situation ofviral or prionic infections with retrovirus type agentsthat get included in the muscular fi bres and manifestthemselves in favourable environments after latencyperiods of some years.

Synthesising the possible aetio-pathogenic causesof FM, I made use of W. Muller’s data (1987) adaptedto the present knowledge (Table 1). 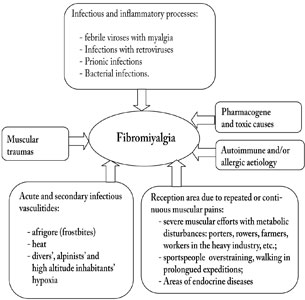 Although the FM aetio – pathogenesis is still unclear, according to this table, two big aetiological categories are analysed: the infectious and the inﬂammatory. This deﬁnition is also oriented for the diﬀerential diagnoses of FM. Depending on localization and lesional aspects this guide evokes the FM association possibilities with the neighbouring anatomical forms (Table 2).

The inﬂammatory (dysmetabolic) processes, as well as the inﬂammatory ones, are associated with the deﬁciencies of the neuromuscular plaque and of the receptors in the muscle and tendon fasciae which signal the pain and induce the muscular contraction.When the chemistry of these networks and terminations is perturbed, perpetuation and maintenance reﬂexes install themselves, which disrupts the vascular network from the muscles, too. The chronic hypoxia establishes itself, disturbing the supply and exchanges of the muscular glycogen by lowering the level.

All the authors support the importance of thepsychic pathology in the development of the myalgic pathology. The American deﬁnition of FM: “it ischaracterised by diﬀused pains in the skeletal muscles,associated with multiple sensitivities of the connectivetissues and with depressive moods; it manifests itselfby morning rigidity, muscular fatigue, migraine, cervical pains and rachialgias, sleep disorders, anxiety, sadness, sometimes with suicidal ideas.” These depressivemoods enter the scene ab initio and amplify themselvesin evolution, being fed by myalgias, reduced motility,invoking the diﬀerences between the anterior motorabilities and the present deﬁcit which ampliﬁes in orthostasis and especially during and after physic activities. It aﬀects especially the feminine sex.

The national and international societies that study the pain have obtained the oﬃcial recognition of FM in the WHO nomenclature since 1992.The evolution of this pathology from acute to chronic has been included in the deﬁnition, and the major argument was the statistic one, by which FM is signalled in over 2030% of the population over 30-40 years old.

The present criteria established by The American College of Rheumatology for the positive diagnosis of FM are:
— The presence of the pain acutely installed or slowly progressing to muscular groups or masses (ﬁ g. 1);
— Chronic evolution with the persistence of these physical pains;
— The presence of depressive disorders which intensify along the way;
— Exclusion of other neurological diagnoses;
— Basic paraclinical balance for the diﬀerential diagnosis with other allergies or recognition of certain comorbidities, because we still do not have a speciﬁc test for FM. The current tests are performed which allow to deﬁ ne the patient’s bio-clinical state. Thus, the negative laboratory tests contribute to sustaining the fibromyalgia diagnosis.

Research in the structural pathology of FM has been done and continues to be done. In the evolution stages of the disease, especially in aged people,the inﬂammation of the muscular ﬁlaments could be detected and inﬂammatory dilacerations among myoﬁbrils. In later evolution stages, the disorder in the sarcolemma and in the contractile structures appears,together with necroses of the muscle tissue with intracellular glycogen deposits. These microscopic aspects could be the basis for muscle ﬁbrosis which is clinically expressed by myalgias and motor deﬁcits. 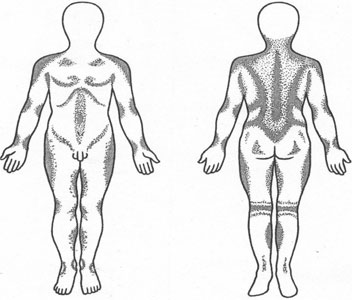 We shall take into consideration that FM is a chronic disease. Myopathy and infectious or inﬂammatory (viral, bacterial, helmintic, caused by protozoan parasites) myositis are excluded, as well as poly-myositis, dermatomyositis, gout, medicine induced myositis, periarthritis, and with muscular fever following an excessive eﬀort.

First of all we must point out the importance of antiviral, ant-inﬂammatory and anti-fever treatments in children with myalgia infectious diseases.

Being a syndrome which manifests itself through pains, with the same location most of the time, the local therapy has become usual under diﬀ erent aspects.Physio-therapeutic measures are warm relaxing baths,cures in rest homes in heath resorts with thermal waters accompanied by kinesiotherapy and sedative-relaxing procedures, including herbal baths.

Muscle relaxing massages are recommended as well as passive and active mobilizations in water.These treatments are parallel with local applications of therapeutic mud and warm paraﬃ n or bee wax, all of them at medium temperatures avoiding overheated or hot procedures; mineral water baths at 300 – 320C are practiced too. There are also sets of antiphlogistic and antalgique ointments which are tolerated in ﬁ brositis or anti-inﬂammatory and antalgique ointments with herb extracts: Heleborus (Boicil), combined preparations (mint with cinnamon, etc.)

Revulsive medicines or diﬀerent alcoholic solutions are not recommended.

The range of oral treatments is very extended, each practicing doctor having their own formulas. Nonsteroidal anti-inﬂammatory drugs are preferred lately,which have become usual in treating pains in soft tissues, joints, fever and in fibromyalgia: Diclofenac,Ketoprofen, Nimesulid, etc. But, in case of intolerance, we appeal again to classical salicylate preparations which have good eﬀects.

Exercise, walking, swimming, and gymnastics,short runs are recommended, knowing that overstraining doubles the pains by loading the muscles with catabolits (lactic acid) which produce muscle fever. In FM, there is a classic pharmacologic triade made up of antalgique – antiphlogistic treatments associated with muscle relaxing preparations and accompanied by tricyclic antidepressives that proved necessary and eﬃcacious in adopting a complete therapeutic conduit.

The doctor will establish the preponderance of one or of another pharmacological group according to the predominance of the patient’s symptomatology.In cases of somatogenic depression (“masked” depression) the eﬀect of tricylic antidepressives is eﬃ cacious with very good resolution of myalgic pains and recovery of the negative psychic states. I have used amitriptilina, the best recommended in the series of tricylic antidepressives.

The corticosteroids may be used only in local applications.

Acupuncture, pressopuncture or other non-aggressive, non-conventional therapies could be used, too.

Occasionally, self-medication treatment practiced by patients is possible when it is applied for a short period, but the doctor’s recommendation is essential.

FM has oscillating clinic manifestations, being meteo-sensitive, sometimes accompanied by trailing myalgies which immobilise the patient, especially in senior individuals with pains in the lower limbs: the heavy feet of the older people.These situations amplify the negative and depressive psychic states which is why one should not omit the above mentioned anti-depressive treatments.

Chronic patients with FM beneﬁt from various socio-therapies, as, for instance, organisation of meetings, games, performances, trips which detach them from their myalgic suﬀ erance.

Fibromyalgia, a modern term continuing the classical concept of muscular rheumatism, is an ordinary and frequent pathology, especially in persons with ages over 30. I have presented a rough guide in this pathology and some therapeutic aspects for the information of the specialist physician and for the practitioner who very frequently meet muscular suﬀ ering and pains in their patients.