The study presents a statistical analysis of suicidal attempts in children and youths at the Clinic of Psychiatry and Neurology Timisoara for Children in the period 2001 – 2005. The following parameters were used: the global number of cases, the assignment on groups of ages, the distribution regarding the pacients sexes, the modality of fulfilling the suicidal attempt, the phases of the suicidal behaviour, the number of attempts, the season’s periodicity. The result showed that the phenomenon occured especially in girls and adolescents over 16 years, that there were used less violent methods, the rate of afirmation and ideation before the suicidal act were low and that the highest incidence of attempts occured in the spring and fall months.

The problematic of suicide

The suicidal behavior is a complex social health problem, being one of the first 5-9 entities of general morbidity and the first 2-3 causes of mortality at young ages.

A main problem of the pediatric psychiatry is as well the lowering of the age at which the suicidal accident happens. The suicidal gesture reflects a crisis situation which assumes a promt intervention, therefor a global evaluation of people which present risks is needed.

OMS defines the suicide as an action trough which a person tries to selfdistroy herself physicaly, with a more or less autentical intention to lose her life. The suicidal atempt is the behaviour trough which a person tries to end her life, using active or passive methodes, but not always achieving her purpose. It is clearly a demand for help and a way of pulling the attention on the major existential problems of children and youth.

The study evaluated the pacients with suicidal attempts refering to:

The material used is taken from the cases of the Neuro-Psychiatry Clinic for Children Timisoara, in the period 2001-2005, studying the clinical and personal files of the pacients in the ambulatory.

The methodology used to evaluate the suicidal ideation and the psihopathology uses the DSM-IV and ICD 10 criterias for the major depressive episode, the most feared factor for the suicidal behaviour.

Statistic analysis of the researched data 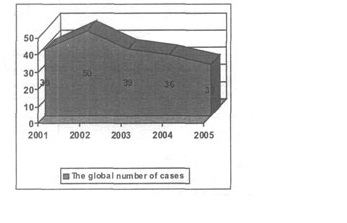 The distribution regarding the pacients sexes 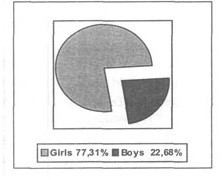 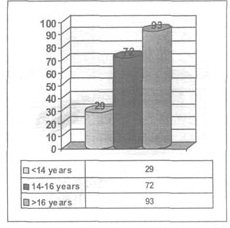 The assignment on groups of ages

The modality of fulfilling the suicidal attempt 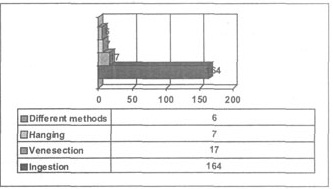 The phases of the suicidal behaviour 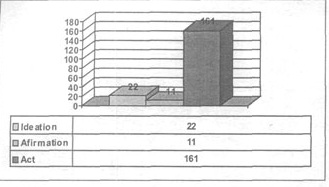 The number of attempts 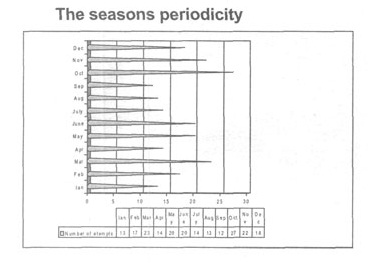 The importance of the studies of the NPI Clinic Timisoara, in time, results from the statistic and compartive evaluation of the suicidal behaviour from 1981 to 2005 on periods of 5 years. There has been a higher rate of incidence of the phenomen with the progression of the years. 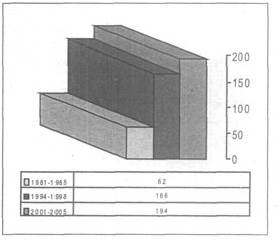