We present a case regarding a patient of 7 months old with several admissions in our hospital (13 admissions totaling 238 days). The admission diagnosis (the last admission) comprised: generalized tonic-clonic seizures (convulsive syndrome in treatment), cerebral atrophy, prior infection with herpetic virus. The transfontanellar echography (at the last admission) highlighted: massive double compartment hydrocephalus, severe leukomalacia. A CT examination was advised. The CT examination set out the diagnosis of hydranencephaly. Since only the structures of the posterior cerebral fossa are present, we consider the case a rare case of hydranencephaly.

INTRODUCTION Definition. Hydranencephaly means the absence of cerebral hemispheres which are replaced by a membranous saccular structure (leptomeninges) containing LCR [1, 9]. Hydranencephaly was described as a different entity in 1972 by Crome [2]. Epidemiology. The incidence of hydranencephaly is 1.0 to 2.5 for 10.000 births [1, 3, 4, 5].1% of the children initially diagnosed (clinically) with hydrocephalus develop hydranencephaly [1]. Etiology. Hydranencephaly derives from a destructive process which leads to the liquefaction of the cerebral hemispheres, totally [1] or for the most part [6]. 5 hypotheses (theories) as etiology [6] are known: 1. Heart attack, respectively the bilateral occlusion of the supraclinoid segment of the internal carotid artery or of the medium cerebral arteries 2. Leukomalacia, respectively an extreme form of leukomalacia formed from the confluence of multiple cystic cavities 3. Diffuse hypoxic-ischemic necrosis, respectively fetal hypoxia due to exposure to carbon monoxide (or butane gas) resulting in a massive tissue necrosis with cavities and the resorption of the tissue subject to necrosis 4. Infection, respectively congenital toxoplasmosis, infection with cytomegalovirus and infection with herpes simplex; a necrotic vasculitis is up for debate [7]. 5. Thromboplastic material from a deceased twin (macerated) Diagnosis Positive diagnosis. It is determined by echographic examinations (ante- and post-natal), MRI (ante- and post-natal) and CT [6]. The differential diagnosis brings up mainly 2 pathologies [1, 6].: 1. Severe obstructive hydrocephalus (extreme): the cortex is identified as a thin blade; it is accompanied by macrocephaly; the medium cerebral artery is normal (angiography) 2. Alobar holoprosencephaly: the falx cerebri is absent and the residual cortical tissue, which merges in the anterior part at the level of the median line, has a horseshow form (fer a cheval) [8]. Prognosis Except the unilateral form (hemihydranencephaly), the prognosis is poor [9].

Most patients die in the uterus; for those who survive, death occurs in the first year of life [9]. Treatment For the children who survive, physiotherapy, medication for epilepsy and the treatment of respiratory infections are treatment elements [9]. CASE PRESENTATION A patient of 7 months old, male, born at 7 months (weight at birth – 1700 g) with multiple admissions in our hospital (13 admissions totaling 238 days). The patient is without custodians. On the last admission, the intensive care unit specified the admission diagnosis as follows: generalized tonic-clonic seizures (convulsive syndrome in treatment), cerebral atrophy, prior infection with herpetic virus; dermatitis of the scalp; conjunctivitis; ponderal dystrophy. The transfontanellar echography (at the last admission) highlighted: massive double compartment hydrocephalus, severe leukomalacia. A CT examination was advised. The diagnosis of the CT examination was: postinfection cerebral atrophy with herpetic virus. The following were also noted at the CT examination:  – The absence of cerebral hemispheres with the persistence of the falx cerebri (Fig. 1) – The cerebral hemispheres are replaced by 2 saccular structures containing LCR (without  – The persistence of a peripheral cerebral parenchyma blade) (Fig. 1, Fig. 2, Fig. 3, Fig. 4, Fig. 5); inside them, the septa of some smaller saccular structures are identified (containing LCR) (Fig. 1, Fig. 2 and Fig. 4 and Fig. 5).  – The cerebral elements of the posterior cerebral fossa are present (persistent) (Fig. 3 and Fig. 4) – At central level, the walls of the lateral ventricles and of the 3rd ventricle are identified as some liquid saccular structures (moderately increased) (Fig. 5)   – Calcifications at the level of the falx cerebri (Fig. 1, Fig. 2 and Fig. 5), cerebellar tentorium (Fig. 4), leptomeninges (Fig. 2, Fig. 5), at the level of septa (Fig. 1, Fig. 4 and Fig. 5) and at the level of some persistent cerebral parenchyma islands (front right – Fig. 6, Fig. 7 and Fig. 8 and occipital left – Fig. 4 and Fig. 9). – Calcifications at the level of the right eyebal 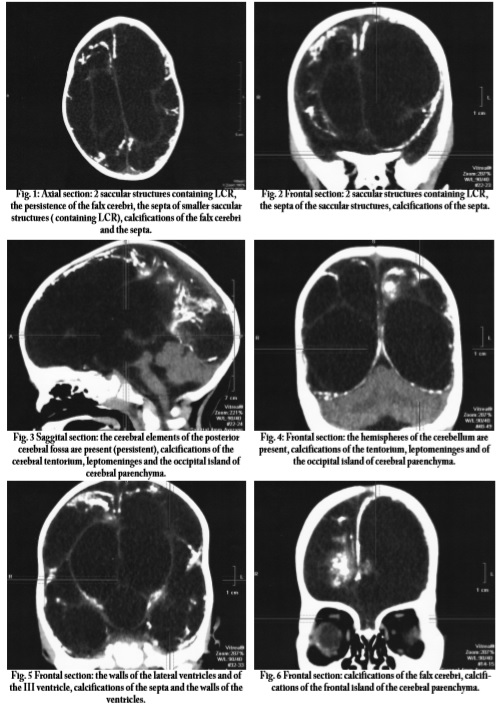 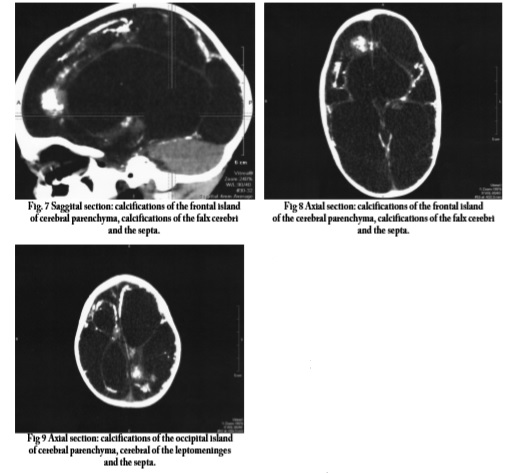 Conclusion: hydranencephaly with calcifications (leptomeninges, falx cerebri and cerebellar tentorium, septa, islands of persistent cerebral parenchyma located at the front right and occipital left) DISCUSSIONS In the USA, hydranencephaly is recorded as a rare congenital malformation of the central nervous system [10].Cecchetto et al. reported information of 37 different publications and collected 76 patients of the literature (article published in 2013) [11]. Hydranencephaly may affect only one cerebral hemisphere (hemihydranencephaly – HHE) which even rarer than the bilateral form; in some cases, the prognosis is better for the unilateral form [9].

Usually, in hydranencephaly, the midbrain, the basal ganglions, the choroid plexus, the cerebellum and the cerebral trunk are kept in the head [4]. Our case which shows the cerebral trunk and the cerebellum, together with a portion of the midbrain, is a rare case of hydranencephaly. In hydranencephaly, survival is given by the integrity of the cerebral trunk which controls vital aspects like temperature, blood pressure, cardiorespiratory function [9]. The presence of micro-calcifications may portray an infectious fetopathy. The following are included according to their frequency: infections with cytomegalovirus, toxoplasmosis, rubella, chicken pox, the virus of lymphocytic choriomeningitis [6,12].  Our case has many obvious calcifications (identified via CT). Regarding cerebral calcifications in children, together with the infectious causes, we also take into account the genetic and anoxic causes [13]. Often, in hydranencephaly, islands of residual cerebral tissue are seen in the occipital part – at the occipital poles, in the temporal part and at the frontal lobes – orbitofrontal regions [6, 12]. In our case, these are present in the front right (Fig. 6, Fig. 7 and Fig. 8) and occipital left (Fig. 4 and Fig. 9). Extreme hydrocephalus is difficult to differentiate from hydranencephaly. Even a minimum frontal cerebral cortex which is present reveals an extreme hydranencephaly [1, 9]. In hydranencephaly, the head circumference is normal or slightly decreased: in hydrocephalus is enlarged [8].

In our case, the cranial perimeter is normal (46 cm at 7 months) and the frontal cerebral cortex is absent. Some authors consider that porencephaly and hydranencephaly are different degrees of the same pathology in which porencephaly is a more localized defect [9]. The differential diagnosis of hydranencephaly with porencephalic cysts is somewhat difficult. Keeping a frontal cortex and a parieto-occipital cortex is seen frequently in porencephalic cysts [9]. Holoprosencephaly is a congenital anomaly resulting from the absence or the incomplete diverticulum of the anterior brain [9]. The alobar form is more severe; a unique dilated ventricular cavity is observed [14]. Compared to hydranencephaly, the alobar form of holoprosencephaly has a partial fusion of the thalamus and the falx cerebri is absent. Also, in holoprosencephaly, the head of the child is small and facial malformations are present [9]. CONCLUSIONS The diagnosis was set following the CT examination. The differential diagnosis with severe obstructive hydrocephalus, alobar holoprosencephaly and porencephalic cysts had no difficulties. The presence of calcifications brings up an infectious fetopathy (as etiological factor). The presented case is a rare case of hydranencephaly, since only the cerebral components of the posterior cerebral fossa are present (remaining).