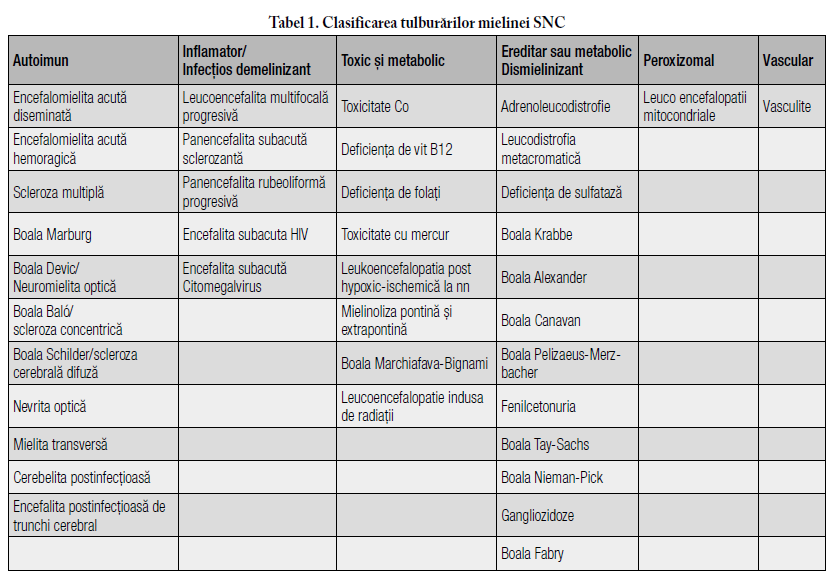 The concept of primary demyelination involves the destruction of myelin, oligodentrocytes and Schwann cells with the preservation of other CNS components.

Axon damage is common in demyelinating lesions and correlates with permanent functional deficits.

CNS demyelinating diseases are the consequence of:

• an imune mediated inflamatory process followed by the disturbance of the normal development of myelin (demyelinating or myelinoclastic diseases);

• metabolic and genetic disorders in the myelin methabolism with the formation of abnormal myelin (dysmyelinating diseases);

• a process of primary demyelination aş a result of a hypoxic – ischemic or toxic cerebral lesion.

Table 1 presents the classification of myelin disorders in the CNS according to the mechanism that produces them [1].

Acute disseminated encephalomyelitis is the most common demyelinating disease in the child under 12 years of age, while multiple sclerosis is most common in adolescents and adults.

It is difficult to distinguish the acute disseminated encephalitis (ADE) from the first episode of Multiple Sclerosis (MS) For the MS diagnosis, a second, distinct episode is necessary after one month from the first appearance of ADE.

According to J. Menkes [1], however, this hypothesis is controversial because the second episode might be an ADE relapse and not the first episode of MS. This distinction might be made only in the prepubertal period.

The pure transverse myelitis is considered a distinct nosologic entity due to a complex mechanism of production: autoimmune and postinfectious [1]

There is a semiological area of superposition between ADE and the Guillain Barré syndrome. It is difficult to classify the MS of the Marburg Type, the myelinoclastic MS (Schilder’s disease) and the Concentric Sclerosis (Baló’s disease).

In children under 2 years of age, who had a single severe demyelinating episode with oedema, the diagnosis should be MS or, more adequately, severe ADE.

The aetiopathological mechanism of these primary demyelinating diseases of the CNS (MS, ADE) is incompletely elucidated or even unknown (Devic’s Disease, Transverse Myelitis). Both MS and ADE are considered as autoimmune diseases, involving cellular and humoral responses directed, at least in part, towards myelin antigens;

The debut of MS does not have a clear aetiological relationship with a preceding infection; the clinical bursts of the disease are usually associated with the production of oligoclonal immunoglobulins that may be detected in the cerebrospinal fluid (CSF);

In many cases, MS is determined by an infectious disease and it is accompanied by increased concentrations of immunoglobulins in the CSF;

The normal profile of the immunoglobulins in the CSF is characteristic to the relapses in the ADE compared to MS, where the probability of abnormality in immunoglobulins from CSF is higher than 94% in association with the recurrence in SM; 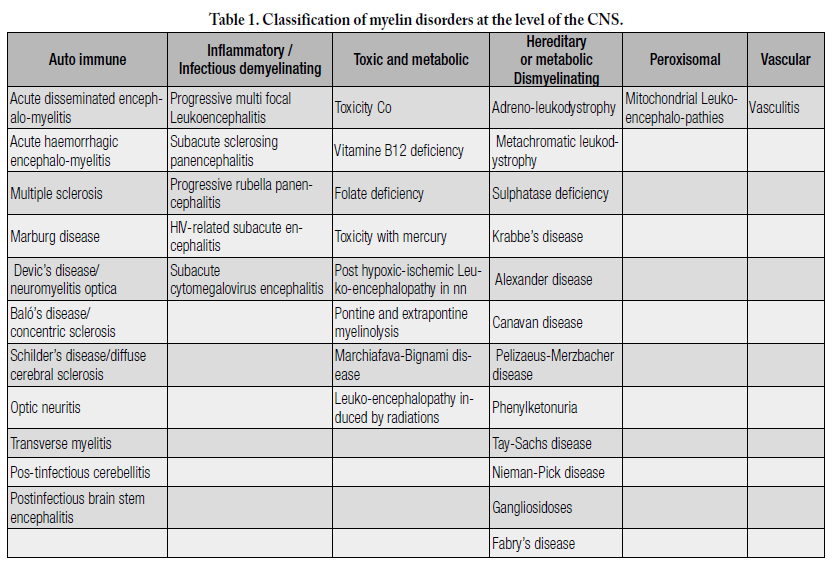 A small percentage of patients who presented typical bursts of ADE in their early childhood fulfil the clinical criteria for the diagnosis of multiple sclerosis in adolescence;

There are no specific diagnosis tests or disease biomarkers in order to differentiate ADE from SM in children.

It is difficult to differentiate ADE from other forms of inflammatory encephalitis.

The MRI sensitivity to demonstrate abnormalities in the development and maintenance of myelin has conceptually extended the disorders affecting myelin. Understanding the pathophysiology of leukodystrophies is evolving, and classifications of leucodistrophy continue to be arbitrary.

According to the Manual of Paediatric Neurology, Principles and Practice, 4th edition, by Kenneth F.Swaiman, the demyelinating diseases are presented as leukodystrophies and leukoencephalopathies [2].The concept of leukodystrophy has been changed considerably from the original definition, which was introduced in 1928 for the first time by Bielschowvki and Henneberg.

CNS irrespective of the basic pathophysiological or histological mechanism.

According to the pathological mechanism, the leukoencephalopathies may be coarsely divided into:

– dysmyelinating with abnormal formation of myelin and disorder in the myelination process,

– hypomielinating with decrease in the production of myelin,

– demyelinating with loss of myelin which was previously normal morphologically and functionally,

– spongiform with myelin division and formation of intramyelinic vacuoles,

– cystic with rarefaction of white matter and cystic degeneration.

Table 2 presents the leukoencephalopathies according to the pathogenic mechanism of production [3].

According to their aetiology, leukoencephalopathies may be classified into the following

be formulated because the demyelinating diseases may also be the consequence of certain general metabolism disorders that affect the nervous system secondarily, such as: galactosemy, phenylketonuria, aciduria, Pompe disease and others (Kolodny, 1993) Table 3 presents the main aetiological forms of leukoencephalopathies [1].

The aetiologic diagnosis of primary demyelinating disease is not easy to support, considering the pathophysiological mechanisms involved in that condition. However, it is important, to recognize a primary demyelinating disease in order to institute a specific early treatment with timelimited evolution and improvement of the quality of life of these patients and of their families.

Corticotherapy, immunoglobulins and state-of-theart treatments (INTERFERON) have given a new meaning to the lives of patients diagnosed with demyelinating diseases at an early age.