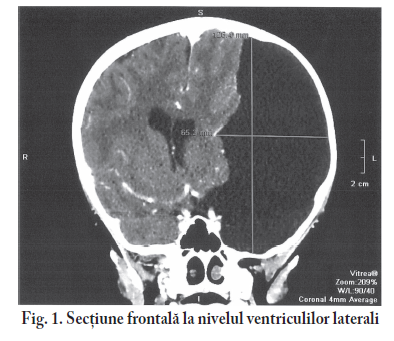 Out of all 15 cases with cerebral arachnoid cyst (including the suspected ones), 2 cases (13.3%) were with localization on the convexity of the cerebral hemisphere.

The cerebral arachnoid cysts represent about 1% of all intracranial masses [2, 3, 8].

The cerebral arachnoid cysts are benign lesions with reduced dimensions and are asymptomatic in most of the cases [2]. When symptoms occur, they are due to the progressive increase, respective due to the mass effect (compression effect) and intracranial high blood pressure [2, 5].

Two of the 7 cases diagnosed with arachnoid cyst (within the CT imagistic Service) of the “Louis Turcanu” Clinical Emergency Hospital for Children of Timisoara, were selected, namely two children with particular imagistic aspects (M.D.R., the first child, age 6 years was admitted due to the following complaints: retard with autistic elements, macrocrania, namely cranial perimeter 57 cm at 7 years, D.A., the second child, age 14 years, was hospitalized for TCC with left hind limb and HIC episode, which is why CT was performed urgently.

The imagistic aspects of the 2 cases, aspects that lead to the diagnostic (in order to underline their importance) will be discussed herein.

The imagistic exams of the two patients consisted in a cranial-cerebral CT scan, the 3 specific incidences, and for the first case a CT cerebral angiography has been also performed.

The results of the CT scan, as we underlined here above, have been essential to establish the diagnostic and will be presented here below, the fist the first case: 4 CT images and 6 images for the second case.

The CT scans images of the two cases are presented here below (see figure 1-10).

– Cranial asymmetry (left hemicranium is more voluminous, more manifest at the level of the cranial calotte);

– The structures of the median line (falxcerebri and the septum pellucidum) are deviated towards the right;

– Voluminous cystic formation located in the left frontotemporoparietal area, clearly delimitated, with a wall imperceptible by the CT scan; the content of the formation has liquid-like density 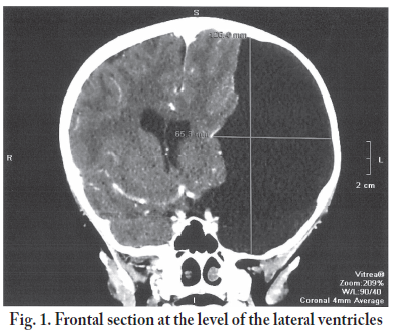 – The structures of the median line are deviated towards the right; 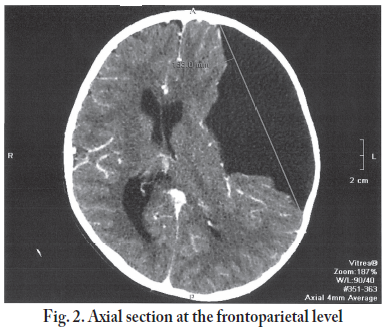 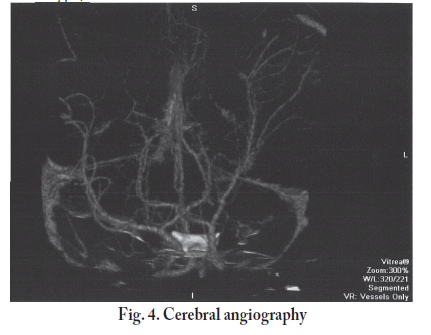 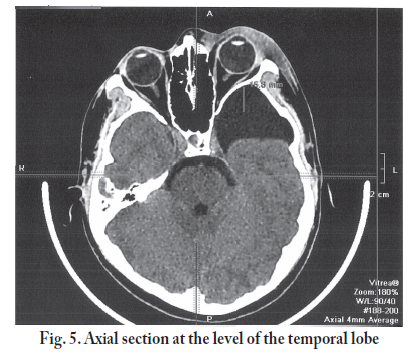 – The cyst’s wall is imperceptible on CT scan;

– The cystic formation has liquid-like density. 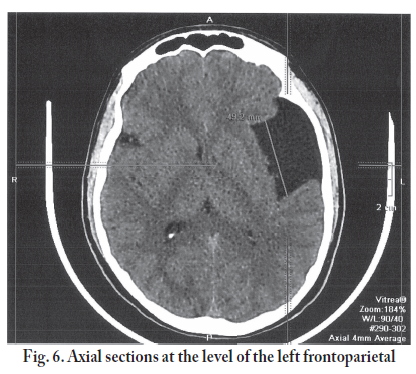 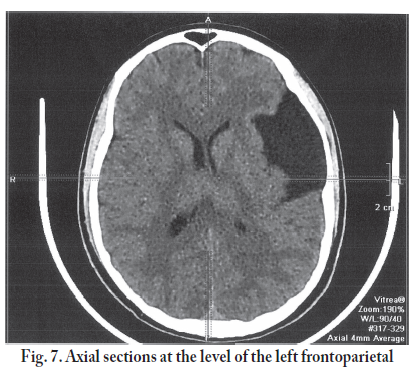 Fig. 8. CT image – frontal section at the level of the frontal lobe, passing through the orbits and the maxillary sinuses: moderately enlarged left side frontotemporal arachnoid cyst 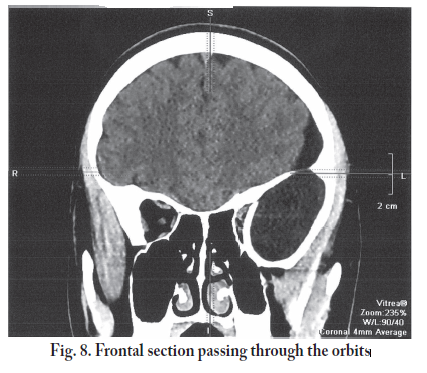 – Moderate cranial asymmetry having compressive effect on the skull, at the level of the anterior pole of the temporal lobe, on the orbit (posterolateral wall) and of the left maxillary sinus (left wall);

– The cystic formation has liquid-like density.

– Moderate cranial asymmetry having moderate compressive effect on the cranial calotte (temporoparietal) and on the left sphenoid sinus. 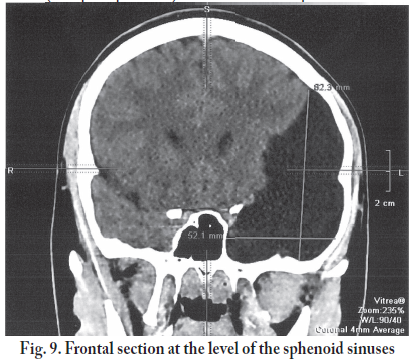 Fig. 10. CT image – sagittal section at the level of the left frontal temporal parietal lobe, passing through the inner ear: moderately enlarged arachnoid cyst having the vertical diameter of 83.6 mm. 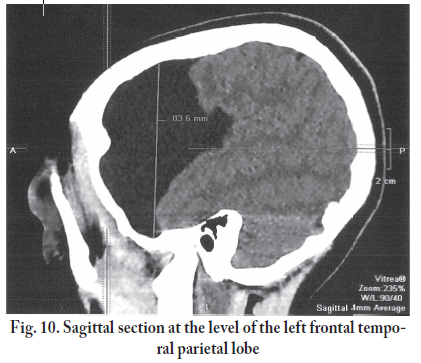 The CT imagistic aspects of the case 1, M.D.R. are summarized as follows:

– Liquid-like density and a wall imperceptible by the CT scan at the level of the cystic formation;

– The structures of the median line (the septum pellucidum) are deviated towards the right and the left lateral ventricle is moderately compressed;

The CT imagistic aspects of the case 2, D.A. are summarized as follows:

– Liquid-like density and a wall imperceptible by the CT scan at the level of the cystic formation;

– Discrete asymmetry of the cerebral hemispheres and the left ventricle is mildly compressed;

– Compressive effect on the orbit bone wall and on the left eyeball.

Conclusion: Moderately enlarged arachnoid cyst located in the left frontal temporal parietal side with compressive effect on the orbit bone wall and on the left eyeball.

The cerebral arachnoid cyst is a congenital benignlesion with fluid content (lcr), well delimitated, with an imperceptible wall which does not communicate with the ventricular system [5, 8].

In both cases (enlarged convexity arachnoid cysts), the cystic formation had a fluid-like density, an imperceptible wall and did not communicate with the ventricular system and a compressive syndrome on the skull (in the first case on the calotte and in the second case on the skull base).

In the first case, due to the voluminous dimensions, the compression effect is significant: the structures of the medial line are deviated towards

The differential diagnosis of the cerebral arachnoid cyst is the non-tumor primary intracranial cysts.

In both cases (enlarged convexity arachnoid cysts), within the differential diagnosis, we may discuss 2 intracranial cystic pathologies: the cerebral hydatid cyst and porencephaly.

The cerebral hydatid cyst is a rare cerebral pathology, being mainly found out in children (50- 75% of the cases) [7], located in the hemispheric parenchyma, respectively in the intra-axial side; rarely, it is sub-arachnoid [6]. It is well delimited with a laminated wall consisting of the cyst’s membranes and a pericyst(the CT scan cannot distinguish the membranes of the pericyst) [6].

In fissuring of the hydatid cyst, a lobe-like form appears and the calcifications in the cerebral hydatid cyst are rare (less than 1%) [6].

The porencephalic cavity is congenital or acquired (posttraumatic, ischemic or post-surgery) [4].

The porencephaly is located inside the parenchyma (intra-axial lesion) [1] and communicates with the sub-arachnoid space or with the ventricular system [4, 7]. It has a perilesional gliosis in the pericystic white substance [4, 7].

The second case, due to the clinical frame after an acute cranial-cerebral traumatism we had to exclude an eventual posttraumatic intracranial hematoma (by the liquid-like consistency of the cystic formation and by the compressive syndrome on the orbit – longterm expensive process).

In both case the diagnostic of arachnoid cyst has been set by a CT scan on the basis of the following common imagistic elements: liquid-like density, imperceptible wall by CT scan and long-term cranialcerebral compressive syndrome (more obvious in the first case that has an large size cyst).

In both cases, the CT scan was decisive in establishing the diagnosis of arachnoid cyst of cerebral convexity and also allowed the evaluation of the pathological aspect (respectively the measurement of the dimensions of cystic lesions) and the estimation of the compression effect.

In the first case (voluminous arachnoid cyst), the compression (cranial cerebral) effect was obvious with macrocrania (macrocephaly) and with the obvious deviation of the middle line structures.

The CT scan was useful for the guidance of the therapeutic actions.