“Violence in familiy” is a negative phenomenon of human relationships between members of the most important social core – the family – aspect that in the last century increase all over the world.

The specialists from the center try to find to keep the child in the family as lons as this is possible and to give an alternative for children for rehabilitation services (Day Center). To rehabilitate the disturbed behavior of children and to solve affective problems the specialists include the child into a special program of education.

The phenomenon of family violence (or domestic violence) is the negative configuration of the inter-relationships existing among the members of the most important social nucleus – the family.

Family is a structured system where each person occupies a role and it has an inter-dependence with resonance on the other person. According to McMaster Model, family assessment is a complex endeavour considering the way it:

According to the Finish trend of thought, families are assessed on a scale of five characteristics:

Healthy family without conflicts, dominated by empathy among its members;

Slightly perturbed family with transitory conflicts, which may generate anxiety states and mild depressions among its components, the members preserving a clear appreciation of reality.

Neurotic family, which has frequent unsolved conflicts of mild or mediocre intensity. The inter-personal patterns inside such families are clear. Since the conflicts are repetitive to a certain degree, the family perception of the reality between the crises is still satisfactory.

Rigid family – syntonic with dysfunctions produced by unsolved and ignored conflicts, with a blurred delimitation of reality in perspective, achieving a rigid homeostasis.

Severely perturbed families that have open conflicts. Here, the level of anxiety is high and the trust among the members is low. In this type of family, the consequences on the children are disastrous. Intra-family relationships may be re-established, in general in a certain degree, but also with specialised intervention.

According to Rutter, chronic stress accompanied by chronic disorders develops when:

The child’s temperament changes, the youth proving to be unable to accommodate him/herself to the circumstances;

Generally, good relationships with a parent are preserved (with relatives, friends), therefore the coping mechanism is satisfactory;

Successes at the workplace, as well as school effectiveness start to decrease in time, in general for all family members.

The consequences of dysfunction in intra-familial, social, cultural relationships are clearly significant.

In the last century, a host of scientists (psychologists, doctors, sociologists, etc.) such as Spitz, Bender, Bowlbi, Micheaux, Levi, and others, have become aware of the negative influence of conflict, neglect, failure to communicate, and especially of privation of affection. They have described the consequences of these negative aspects on the development of the other behaviours in children, starting from a very early age: motor behaviour, cognitive-verbal protocols of communication functions, receptive-expressive language and affective-adaptive behaviour. More recently, a group of psychologists from Boston, Robertson, Mayer, and Solovey, focused on more advanced stages in the development of personality, emphasizing especially the importance of clinically identified affective disorders in children by the syndrome of sadness, depression, detachment, etc. Deductively, these dysfunctions imply the following aspects:

Notwithstanding the conditions reported above, the conflicts will generate the child’s, suffering which has a negative effect with repercussions on later brain dysfunction.

Stress is a psychological reaction that intervenes at environmental changes, and it is a mixture of emotional experien ces induced to a child when three conditions are fulfilled: 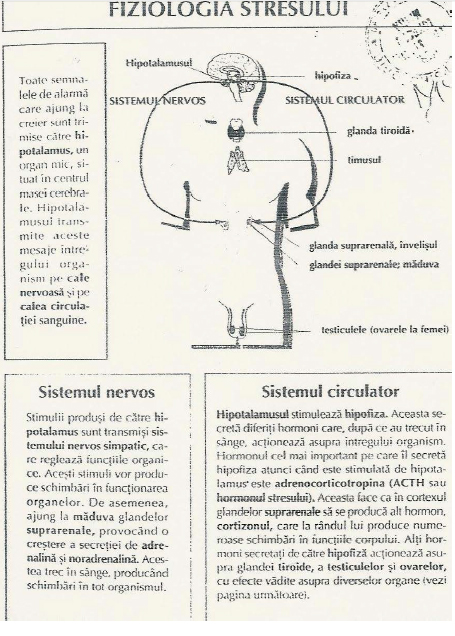 There are several types of suffering:

Coming out of the crisis may take two aspects:

Trauma. It is an experience of extreme intensity caused by events which challenge the survival of the individual. The catastrophe has an absurd, inexplicable size. In such cases the child needs explanations, needs to find the causes, the culprits, otherwise he/she will self-blame him/herself, will feel the need for revenge and develops a spirit of justice. Trauma generates post-traumatic stress situations that can occur within 2 weeks to 6 months after the traumatic event happened.

Daniel Marcelli in his treatise on “Child Psychopathology” makes the following comments in relation to post-traumatic stress syndrome in children:

The repetition syndrome, in which more than the reminiscence of the trauma itself, one may notice:

ANALYSIS ON THE “VIOLENCE IN THE FAMILY” EMERGENCY CENTRE OF THE “Saint Sava” FOUNDATION, BUZAU

An important step at the Emergency Centre of the Foundation “Saint Sava” Buzau, is the complex medical examination of each family member hospitalized there by a physician specialized in INP and by the team of social workers. This examination is very important for an accurate decision taking into account the overall multiple causes that have generated the negative phenomenon.

1. The exam starts with the analysis of the social surveys, which should highlight the following aspects:

These factors, briefly stated, are the main generators of intra-family conflicts.

2. A statement of the child’s personal antecedents: psycho-somatic morbidity, especially a sequellary one, or a developing process (AD / HD, onset of psychosis, epileptic seizures, etc.) or another neurosis factor in the family. 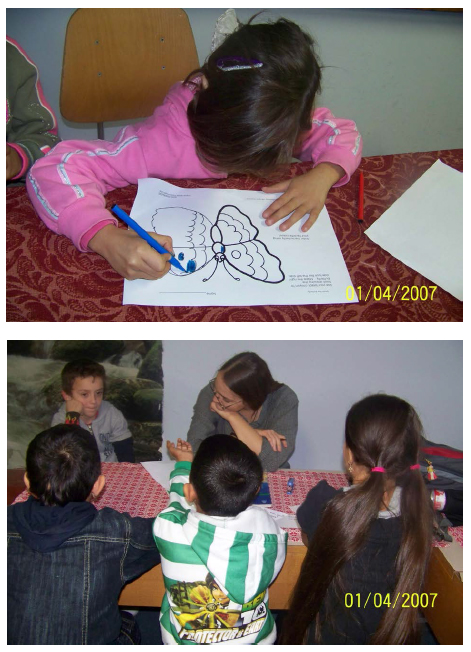 In these conditions, for 12% of the children, clinical investigation by a multidisciplinary team, laboratory tests, imaging exams, etc. have been required in order to decide on a diagnosis. These investigations are very important in order to decide the placement of the children in a balanced environment in rehabilitation units (Day care centres) provided with recovery specialists: psycho-educators, speech therapists, kinetic therapists, therapists for people with NPM disabilities, etc. 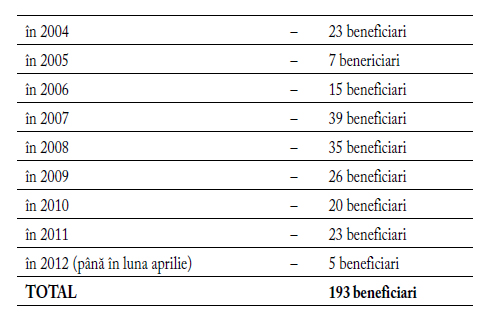 I. A model for rehabilitating children in the “Violence in the Family” Emergency Centre “ is the Day Care Centre of the Foundation “Saint Sava”, constituted in the form of an “after school” facility. 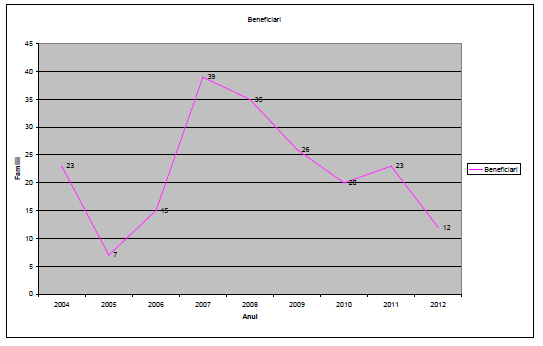 Table 1. Dynamics of families admitted to the “Violence in the Family” Emergency Centre of the “Saint Sava” Foundation, Buzau from its establishment up to the present.

Analysing the dynamics admission peaks are in 2007, 2008, and 2009. The reduced number of admissions (2005, 2012) coincided with major repairs, with significant refurbishments of the Emergency Centre to ensure its optimal functionality. 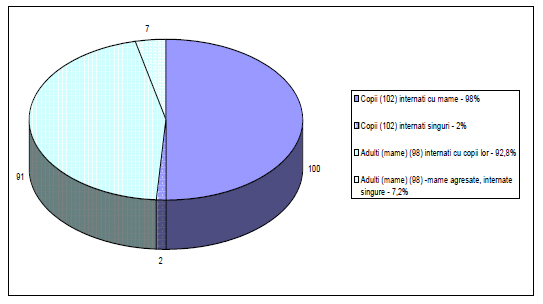 III. Origin of the families admitted to the Emergency Centre:

Table 3.  Origin of beneficiaries according to environment.

IV. Analysis of the causes of conflict in the family:

Table 4. Dynamics of morbidity aetio-pathogeny in the family (in the 98 families). 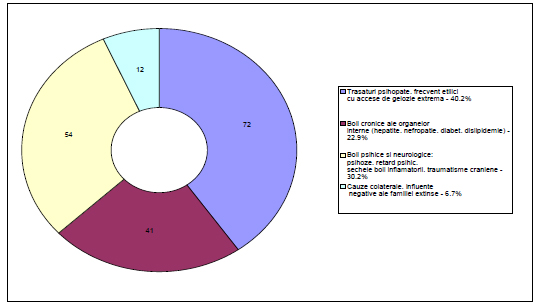 The dynamics displayed above shows that:

Grafic 5. Legal status of the families. 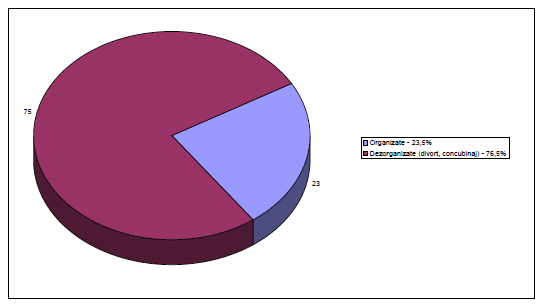 The situation of the Emergency Centre beneficiaries was favourable: there were 75 solved cases, in agreement with the proposed objective: the behaviour of the patients has changed due to counselling, and intra-familial degree of tolerance increased.

Persons who arrive at the Emergency Centre benefit from the following services:

„Violence in the Family” Emergency Centre is organised and functions based on the following principles:

The functions of the Emergency Centre are:

The general aim of the Emergency Centre is to respond to the specific necessities of the vulnerable population within this category of persons.

A. Psychologist Dan Valentina, focusing on the atmosphere existing in families with conflicts, describes the experiment of psychologist Edgar N. Jackson involving 100 persons coming from aggressive-violent families. Out of this total, 20 persons presented reactive depressions, 30 persons had emotional problems in their couple and 50 mothers had very serious emotional traumas. The same author estimates that, in the USA, 3 million women are victims of physical violence and a third of this lot has been affiliated religiously, thus becoming more vulnerable to abuse. 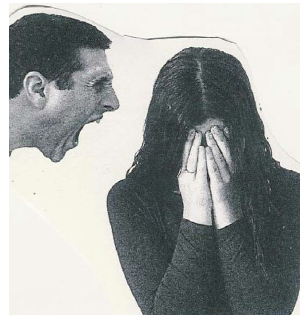 In Romania, there are very many cases of women victims of physical abuse. The main cause is the exaggerated jealousy and the victim develops the feeling of trauma, of guilt, trying to supress the anger of the aggressor. Some aggressors, after an abuse crisis, become calmer, following the phase of the “honeymoon” cycle. Some victims fall ill during the “stress crisis” with indigestion, migraine, altralgy (pains in the joints) or rachialgia (pain in the vertebral column), dizziness, allergic rashes, etc.

The so-called “cycle of violence” is described where abuse generates a person’s attempts to be in control of the other person through an intimidating behaviour. Couple abuse or domestic violence operates in successive cycles having three distinct phases:

The aggressor’s profile is the same, irrespective of the level of professional training. They are egotistic, narrow-minded, seeking permanent personal comfort, continuous attention and require unconditioned devotion. They are also possessive, anxious, irritable, with a fear of being abandoned, cannot stay alone, need permanent approval, manipulate and take advantage of others, are suspicious, dependent, unstable, emotionally immature and like to be perceived by others as powerful, independent individuals.

Although they adopt an attitude of superiority, their inner life is marked by fear, general anxiety and low self-esteem.

Outside the family they lead a double life, being pleasant, jovial, polite, mannered and are considered reliable, respected and appreciated in society; some of them want to dominate (“like father”, the so-called masculine model). In such families, the children bear premature emotional burdens.

In family metamorphosis, role changes have been found, which the specialists named “paternalization of children” because they are forced by circumstances to assume the adult’s responsibility, neglecting their own needs, becoming tough and rigid. Women victims, with a history of elitism in their families and abuses at reluctance, are taught not to contradict, thus becoming victims of such conflicts. They display a difficulty in exploring the emotional universe, thus feeding abuse. Based on religious principles, these women’s mentality, is shaped to soften the “rough corners” through kindness and patience, and in this way abuse increases.

B. It is necessary to present some documentation data that have helped us develop some therapy models.

1. Psychotherapy of the children hospitalized together with their mothers in the “Violence in the Family” Emergency Centre after having been diagnosed with reactive psychic disorders (as described above) aims at:

Violent children are provided with help in order to

It is applied to solitary children that fear the others or are afraid of the unknown. In this therapy, the patients are stimulated by common toys, with rules that are require them to develop particular themes, and especially by games with puppets.

Counselling of the children’s parents:

Basic rules in psychotherapy of the child with affective disorders

It should be remembered that:

The analysis of the child’s drawings should observe the rules the govern the assimilation by the child of the concepts of age.

The analysis of clay modelling – here we may see the child’s emotional reactions.

Music plays also an important role in relaxing the child. It attracts the child, it helps. The therapist can also find ways to stimulate musical resonance “by the aquarium with distilled water” which stimulates the perception of sounds, determining the child to learn simple songs.

Mirror-games train the child, are attractive, correct posture, stimulate the perception of a joyful image, are comforting.

Toys, puppet shows, mobile pictures actions of a story, a poem or a song are attractive and relaxing for the child, increasing his/her ability of cognitive assimilation.

In light of the pathogenesis data of affection-adaptive disorders described above, in addition to behavioural recovery techniques in relation to morbid entities, the interventions aim at correcting neurological somatic, and vegetative, symptoms.

First, the medication we chose for this group of children generally implies the specific psycho-active therapy plus the form of clinical pathogenesis, the evolution of the disorder, etc.

According to S.Milea, certain rules for the implementation of schemes must be followed in the therapeutic approach:

A clear diagnosis regarding causes, clinical forms, development of the case

The phenomenon of “violence” is a real conflicting state in families, regardless of culture, ethnicity, social origin, number of children, etc. This phenomenon has increased in recent years all over the world and imposed: