Introduction: Hydrocephalus is an important problem in the neurosurgical pathology because of the lack of proper treatment. It is characterized by anabnormal buildup of cerebrospinal fluid (CSF) in the cerebral ventricles and subsequent enlargement of the ventricles. The authors review current evidenceregarding hydrocephalus and propose an algorithm for hydrocephalus diagnosis.

Conclusions: Quick diagnosis of hydrocephalus is important, antenatal if possible through non-invasive methods like MRI and 4D ultrasound.Currently, the best available treatment methods include endoscopic third ventriculostomy or placement of a ventriculoperioneal shunt.

Hydrocephalus (HCP) is a condition characterizedby an abnormal buildup of cerebrospinal fluid(CSF) in the cerebral ventricles and subsequentenlargement of the ventricles [1]. In fetuses andinfants, when the cranial sutures are not yet fused,the most frequent clinical finding is represented bymacrocephaly [2,3]. Hydrocephalus remains a majorproblem in the pediatric pathology, especially ininfants, being the most frequent disorder treated bypediatric neurosurgeons [4].

Based on Dandy’s classification in 1913, hydrocephalusis either obstructive or communicating [5] (fig.1).

Obstructive hydrocephalus or noncommunicatinghydrocephalus represents the consecutive excessivebuildup of CSF due to a mechanical blockage ofthe CSF at some point of the ventricular system.Typically, it is associated with increased intracranialpressure (ICP)[6]. 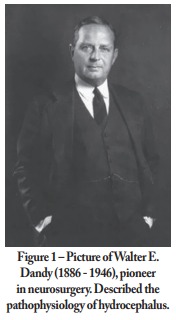 The overall prevalence of congenital hydrocephalusacross different regions in Europe is 4.65 per 10.000births, while in the United States the prevalence is 5,9per 10,000 births [3,8].

Congenital hydrocephalus is commonly aconsequence of malformations of the centralnervous system (CNS), intraventricular hemorrhage,infections, teratogenic agents, trauma and more rarelycongenital CNS tumors [10]. Myelomeningocele isresponsible for almost a quarter of the cases [8,9,11].Chiari malformations produce an obstructive formof hydrocephalus by blocking the flow of the CSF inthe posterior fossa [6]. Other CNS malformationswhich might cause hydrocephalus are the Dandy-Walker malformation, in which up to 90 percent ofthe patients develop hydrocephalus due Luschka andMagendie foramina atresia and also a malformationof the vein of Galen, in which the presence of thearterial pressure in the venous system might beresponsible for the hydrocephalus [6]. Neural tubedefects can be prevented by administering folic acidto women before conception [12].

The most frequent genetic disorders associatedwith hydrocephalus are Patau syndrome (also known astrisomy 13, main abnormalities include microcephaly,meningomyelocele, polydactyly and kidney andheart defect,) Edwards syndrome (or trisomy 18, ischaracterized by small infants with heart and cerebralmalformations such as ventricular septal defect andmicrocephaly) and the triploid syndrome (very raregenetic disorder with the central nervous systemand the skeletal system being the most affected;abnormalities include Arnold-Chiari malformationsand agenesis of the corpus callosum) [10].

Isolated hydrocephalus is commonly producedby aqueduct stenosis, which can result either from acongenital tapering of the aqueduct or following anintrauterine infection which led to inflammation [6].Contradictory data have been published regardingthe role of maternal antidepressants in the appearanceof hydrocephalus [6,13].

A study on 170 pediatric patietns revealed thefollowing most common etiologies of hydrocephalus:congenital (without myelomeningocele) in 64 (38%)patients, congenital (with myelomeningocele) in 49(29%), perinatal hemorrhage in 19 (11%) cases, tumorin 19 (11%) patients, infection in 11 (6,3%) cases andtrauma or subarachnoid hemorrhage in 8 (4,7%)patients [14].

Typically, the infants with hydrocephaluspresent with: macrocephaly and signs of increasedintracranial pressure. Headaches usually occur inthe morning because the venous pressure is higherwhen the patient is lying down, thus increasing theICP and reducing the CSF absorption [16]. Nauseaand vomiting can also occur, especially when theincreased ICP arises in the posterior fossa [16]. Ifthe sutures are not closed, frontal bossing can existand ICP signs might be absent [16]. Also, if thehydrocephalus is slowly progressing, the patient’sbrain will have time to adapt and there will be alonger period of time without symptoms. The sunseteyes represent a characteristic sign for raised ICP, inwhich the eyes are driven downward (fig. 2a). Scalpveins are dilated and are forming a frontotemporalnetwork of veins pressure (fig. 2b) [14,17,18].

This sign is usually revealed by the parents [16].Severe forms of hydrocephalus are associated withlethargy, motor (including spasticity due to thestretching of the motor cortex fibers) and cognitivedysfunctions [14,16].

Children classically present with the same signsand symptoms but without the frontal bossing [14]. 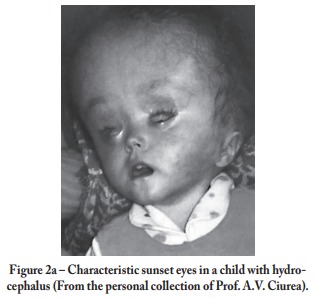 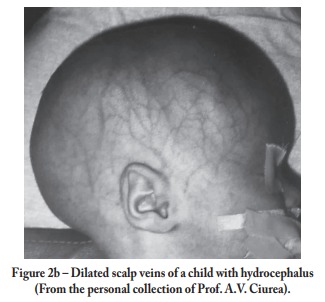 The proposed diagnosis algorithm forhydrocephalus is illustrated in figure 3.

Ventriculomegaly can initially be assessed byperforming an antenatal 4D ultrasonography. Thediameter of the lateral ventricles should be measuredat the level of the atria. The diameter is usuallyconstant between 15 and 40 weeks of gestation anddoes not exceed 10 mm [19]. Mild ventriculomegaly 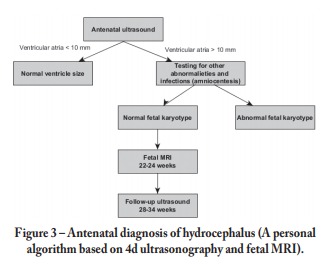 is considered when the atria size exceeds 10 mm, andsevere ventriculomegaly when the ventricular atriasize is greater than 15 mm [20,21]. A qualitativediagnostic method for ventriculomegaly is adecreased choroid to CSF ratio, but this method ismore subjective [22]. It is imperative to performsuch procedures in specialized centers by specializedmedical personal, in order to maximize the specificityand sensitivity of the investigation [23].

One possible cause of ventriculomegaly is aninfection of the central nervous system. Signs ofinfection can be seen when a sonographic exam isperformed and include periventricular or intracerebralcalcifications [23]. Amniotic fluid polymerase chainreaction (PCR) analysis should be performed tofurther elucidate the presence of infection with themost common pathogens being cytomegalovirus(CMV), toxoplasma and parvovirus [23,27,28].

In order to determine the fetal karyotype, it isrecommended to perform an amniocentesis at morethan 15 gestational weeks [23]. An abnormal fetalkaryotype can be present in up to 4.7 percent offetuses with mild ventriculomegaly and incidence iseven higher in severe ventriculomegaly [29].

In fetuses with normal karyotype or no otherplausible cause, a fetal MRI exam must be performed to detect possible cortical abnormalities (fig.4) [30]. Itis usually done at 22 to 24 gestational weeks [23]. Themost frequent anomaly that couldn’t be identified onultrasound but showed up on MRI is agenesis of thecorpus callosum [20]. The usage of MRI is limitedwhen a chromosomal aberration is present, becausein almost all of the cases there is a poor neurologicaloutcome, indifferent of the imaging result [23].

Follow-up ultrasound examinations between 28and 34 weeks of gestation can reveal the regression orprogression of ventriculomegaly [23]. 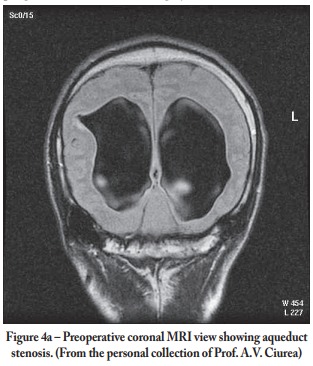 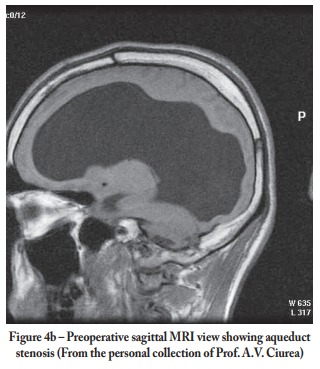 In 13 percent of the cases an initially undetectableabnormality was revealed at the follow-up exam [31].

The CT scan remains a reliable investigationbecause it is readily available and quick to perform,particularly when there are signs of increasedICP (16). Choudhury proposed a classification ofhydrocephalus based on the ventricular/biparietalratio determined on a CT scan [32]. Grade Irepresent a mild dilatation of the ventricles, whilegrade IV is characterized by an extreme form ofhydrocephalus, with the cerebral mantle reduced to1-2 cm (fig. 5). The main disadvantage of the CTscan is the exposure to radiations [33]. If there aresign of hydrocephalus a further MRI exam is usuallyrequired [16]. A funduscopic examination is mostlyneeded in older children to assess the presence ofpapilledema [16,34]. 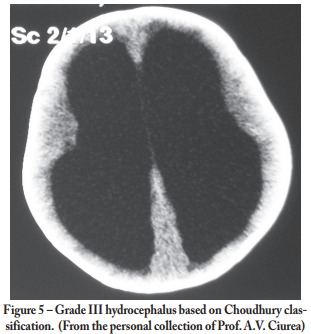 1. Medical management of hydrocephalus hasproven ineffective or has a short term usability [14,28].

2. Surgical treatment is mandatory for acutehydrocephalus and the main treatment options consistof endoscopic third ventriculostomy or placement of aCSF shunt. Unstable patients with rapid progressivehydrocephalus represent an emergency and requirethe placement of a temporary external ventriculardrainage, but it must be taken into account that everyexternal communication has a high risk of infectionso the external ventricular drain must be removed orconverted to a ventriculo-peritoneal shunt as soon as possible [14,35]. Table 1 illustrates the advantages anddisadvantages of the main therapeutic methods. 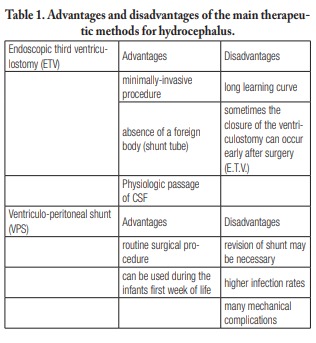 CSF shunts are used to drain the excessive CSFto different cavities or organs. The most commontype of shunt used is the ventriculo-peritoneal one,which drains the CSF from the ventricles to theperitoneum (fig. 6, fig. 7). 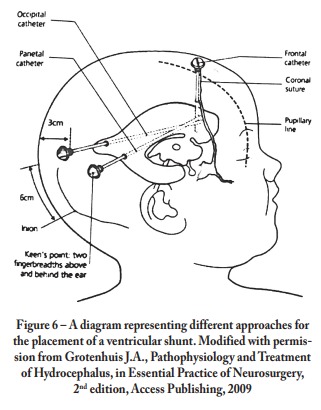 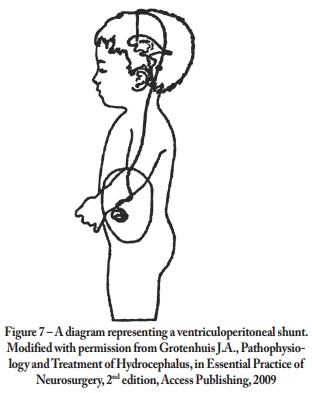 The main advantages of this type of treatmentinclude: quick surgical procedure that can beapplied even during the infants’ first week of lifeand fast revision procedures in case of mechanicalcomplications [14]. Radiologic investigations are usedto assess the viability of the drainage and its properplacement [36,37].

Most common complications of CSF shunts aremechanical and infectious.

Mechanical complications consist mainly ofshunt blockage. It usually arises in the first year afterplacement and the most common obstruction siteis the ventricular catheter [38,39]. Also, during thegrowth of the child, there is a chance of ventriculoperitonealshunt disruption [14].

Between 5-15 percent of shunt placementprocedures suffer infectious complication, mostfrequently in the first six months after placementand can lead to devastating consequences, such aspoor cognitive status and death [35,38]. Some studiessuggest that prophylactic antibiotics reduce the risk ofinfection with up to 50 percent [40–42].

In case of infection the VP shunt must be removedand an external CSF drainage must be placed. Afterconfirming the sterility of 3 consecutive CSF samples,a new VP shunt can be positioned on the contralateralside [43].

b. Endoscopic third ventriculostomy (fig. 8) is analternative for ventriculo-peritoneal shunt and has asuccess rate at six months of 66 percent [44]. The firstendoscopic third ventriculostomy was performed in1923 by Mixter [45]. The likelihood of success canbe estimated using the ETV success score, whichis based on patient’s age, etiology and existence ofprevious shunt [46]. When choosing the optimaltreatment, it must be taken into account that ETVhas higher failure rates in you nger patients andalso this procedure has a greater surgical risk thanthe ventriculo-peritoneal shunt insertion [46]. Ifthe ETV procedure fails, the next step is to placea shunt because repeating the ETV in the acutephase will most probably be unsuccessful [15]. ETVcomplications comprise of meningitis, cranial nervesinjury and even basilar artery perforation [47,48].

3. Elective preterm delivery was proposed forfetuses with severe ventriculomegaly in order toperform a technique to reduce the pressure on thedeveloping brain and stop the progressive braindamage, but no there is no data to sustain the benefitof such procedure [23].

4. Cesarean delivery is indicated only whenventriculomegaly is associated with macrocephaly andshould be performed when the head circumference isgreater than 40 cm, but it may vary depending on thesize of the maternal pelvis and the gestational age [23].

The vital prognosis and also the functionaloutcome must be taken into account when evaluatinga patient with hydrocephalus.

In infants and children, the vital outcome dependson prematurity, presence or absence of respiratoryand CNS infections, nutrition and other organic ormetabolic disorders [14]. If left untreated, up to 50%of the children with hydrocephalus die before reachingthe age of three years and only approximately 20%survive to adulthood [49].

Functional outcome relies mainly on the severityof the hydrocephalus, the destruction of the cerebralparenchyma and also on the time passed betweenthe first signs of hydrocephalus and diagnosis andsurgical treatment [14]. Increased intracranialpressure syndrome and altered visual function arealso factors that influence the functional outcome,including the cognitive function and the IQ score. Anyneuropsychological or ophthalmologic change mustbe promptly evaluated and fundoscopy and radiologicinvestigation must be performed [14]. Because of theirradiation level, CT scans must be avoided wheneverpossible and MRI or ultrasound exams should beused instead. A study that followed the adult outcomeof the patients with hydrocephalus reported that only18% of the patients had no sequalae at all [50]. Themost common deficits were cognitive (47.6%) andmotor (46.5%) [50]. Intercurrent infections, long sunexposure, cerebral trauma and abdominal surgery arefactors that can lead to the decompensation of thehydrocephalus.

Hydrocephalus is a serious illness with aconsiderable mortality rate if left untreated and alsoassociated with a high rate of neurodevelopmentalsequelae within the survivors. Because of this,prevention of neural tube defects by prenataladministration of folic acid is important and antenataldiagnosis and close follow-up are essential.

Even with all the available therapeutic efforts,this major problem of CSF production, reabsorptionand circulation cannot be fully treated and in suchconditions the main objective is prevention (i.e. 4Dultrasound, fetal evaluation and if necessary fetalMRI).