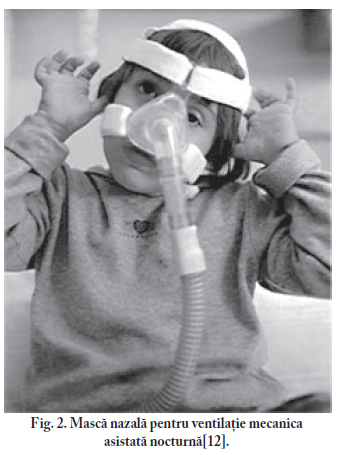 In the development of neuromuscular diseases, dyspnoea is inevitable and represents a challenge of treatment, being the major cause of morbidity and mortality among patients diagnosed with these diseases.

Non-invasive, long term assisted mechanical ventilation has been shown to improve the physiological parameters, quality of life and life expectancy. It is indicated in patients with hypercapnia, abnormal blood gases during sleep in a first stage and in wakefulness during the evolution of the disease, with significant impairment of lung volume, due to rapid progression of the disease.

For many years, the treatment of neuromuscular dyspnoea has been considered “highly controversial” and “raising enormous ethical problems” due to the lack of efficient therapeutic approaches and the impairing of the quality of life of GNMD patients in advanced stage of the disease [1]. The treatment of neuromuscular respiratory insufficiency has for many years been considered “particularly controversial” and “raising enormous ethical difficulties” due to the lack of an effective therapeutic approach and the impairment of the quality of life of patients with advanced stage disease [1]. The Invasive mechanical ventilation by tracheostomy to extend patient survival has been shown to have a negative influence on the patient and his/her family due to the significant deterioration in the quality of life of patients and of their families. This type of invasive ventilation requires a higher level of care, while restricting the lifestyle of the user and of his / her family, and favouring the frequent occurrence of emotional disorders such as anxiety or even depression [2]. 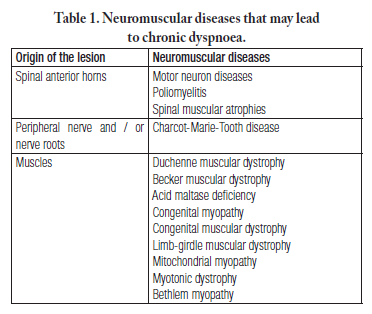 The impairment of the respiratory function in patients with genetic neuromuscular disorder is manifested schematically in three phases: the phase of ventilatory failure, the phase of dyspnoea, the phase of cardiorespiratory failure with risk of pulmonary cord and death. Vital Capacity (VC) is the most accurate quantification of ventilatory failure. Hypercapnia (increase in partial CO2 pressure), and hypoxemia (decrease in partial arterial pressure of O2) during REM sleep stage signify a shift to dyspnoea. This process occurs in two stages: in the first stage, hypercapnia is present during sleep and the second stage, in which hypercapnia is present in the waking and sleeping state [3]. In acute neuromuscular diseases (NMD): polymyositis, acute polyradiculoneuritis and chronic NMD with recurrent acute attacks, as in myasthenia gravis, the main cause of dyspnoea is muscle paralysis.

I. Phase of ventilatory failure

In the phase of ventilatory failure, the restrictive syndrome may remain compensated for a long time. At this phase, the clinical symptomatology is absent and the pressure of blood gases (PaO2 and PaCO2) and VC are normal. When the VC drops below 1000 ml, ventilatory failure turns to respiratory failure (RF).

The laboratory RF diagnosis is given by the decrease of the partial pressure of O2 in arterial blood (PaO2) below 60 mm Hg and / or the increase of the partial pressure of CO2 in arterial blood above 45 mmHg. From the physio pathological point of view, RF is caused by disturbances that take place either at the level of the lungs, responsible for gas exchanges, or at the level of the ventilatory pump represented by the thoracic cage, respiratory muscles and the nervous control system that regulates the activity of the chest muscles in the thoracic cage during breathing. RF in the NMD is defined according to the location of the primary defect:

• When the defect involves the respiratory pump, alveolar hypoventilation occurs with secondary hypercapnia. In this situation, the characteristic laboratory symptom is the increase PaCO2. In patients with myopathy, both described situations may be present: the primary defect located in the respiratory pump determines RF with hypercapnia and hypoxemia, with secondary pulmonary damage because of bronchial hyperventilation, diffuse microatelectases, etc. To the mechanisms that generate RF we may add the respiratory disorders that take place during sleep through central type mechanisms.

The phases of altered respiratory function in patients with genetic neuromuscular disorder can be followed in Figure 1. 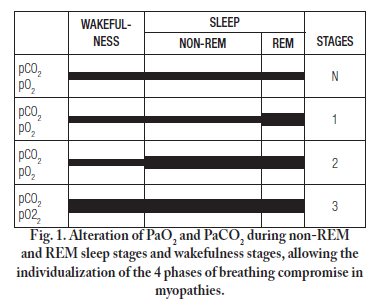 Phase N corresponds to the stage of ventilatory failure where the clinical symptoms are absent and the arterial pressure of the blood gases is normal. In phase I, arterial pressures of the blood gases (PaCO2 and PaO2) are within normal range in both the wakefulness and NON-REM sleep phase. In the REM phase of sleep, hypercapnia (PaCO2 increase) and hypoxemia (decreased PaO2) occur due to intercostal and respiratory muscle damage, with consequences on the mechanical properties of the thoracic cage.

The decrease in the tone of the upper airway muscles results in increased resistance to expelling air. Clinical symptomatology is absent. In phase II, hypercapnia and hypoxemia are present in both stages of sleep.

Clinically, at this stage, sleep disturbances occur, with frequent awakenings due to breathing difficulties, choking. The patient has to change the position of his/her body to adjust breathing and, during the day, complains of headaches. PaCO2 and PaO2 remain at normal values during the day. Phase III corresponds to advanced stages of disease with decompensated RF.

In this phase, the clinical symptoms of hypoxemia and hypercapnia are present both during the night and during the day: polypnea, dyspnoea, cyanosis, drowsiness.

In conclusion, it is considered that the alteration of partial arterial pressures of blood gases during sleep, precedes the somatic symptoms and the alteration of partial pressures of diurnal blood gases. The polygraphic study of sleep, with the monitoring of blood gases, is the most important method that allows the first signs to be caught of the passage from the restrictive syndrome (ventilatory insufficiency), to respiratory failure [7,8,9].

The principles of RF treatment consist in preventing the fostering and aggravating factors of the restrictive syndrome and the earliest possible use of effective RF therapeutic methods to slow the progression of the disease, improve the quality of life of the patients, and extend the life span of these patients. The aggravating or fostering factors of the restrictive syndrome are: immobilization (walking loss), scoliosis and respiratory infections. Prolongation of the walking period is achieved either by early surgery (tenotomies before walking, in the third stage of illness, around the age of 8-10 years) or by late surgery, followed by orthotic application. After loss of walking, the occurrence of scoliosis is evident and it aggravates with age. Scoliosis is the main cause of worsening ventilatory failure, and

it is recommended that it be corrected by surgery, with spine stabilization as early as possible when scoliosis is minimal and there are no signs of respiratory failure. Respiratory infections can precipitate and aggravate RF in vulnerable patients with muscle weakness and ineffective cough. It is recommended that you immediately intervene with antibiotics, secretion drainage, physiotherapy or assisted mechanical ventilation (AMV). Preventive annual influenza vaccination is recommended. Deep breathing exercises, assisted cough and forced airway manoeuvres can improve RF symptoms in the NMD [10].

Rochester et al. have highlighted the positive effects of AMV since 1977 in patients with chronic restrictive syndrome. Through the AMV, the main inspiratory muscles and the diaphragm are put to complete rest. This is demonstrated in the EMG exam by the absence of the activity of these muscles.

In neuromuscular genetic diseases, AMV has a double role: maintaining normal values of blood gas concentrations and putting to rest the affected respiratory muscles, with deficit. The physio pathological aspects secondary to the damage of the respiratory muscles can be solved by the AMV. Nocturnal ventilatory assistance has been shown to improve daytime respiratory activity and reduce the annual decrease in VC. Studies have shown that the use of the breathing apparatus intermittently does not cause muscular atrophy of non-use. It is the continuous mechanical ventilation, which may cause such atrophies of non-use. Because of these considerations, it is recommended to use AMV with intermittent positive pressure, this being the therapeutic method of choice used to prevent early RF.

In their evolution, myopathies and neuromiopathies develop chronic pulmonary cord (cardiomyopathy). The mechanism of generating cardiomyopathy is represented by the alveolar hypoventilation secondary to atrophies of the respiratory muscles. Because of these evolutionary atrophies, severe deformities of the spine occur in cifoscolysis. The diagnosis of cardiomyopathy requires a complete clinical and para-clinical cardiologic examination that is necessary periodically in the evolution of genetic neuromuscular diseases and is mandatory in the advanced stages of these diseases (stages IV-V). The clinical signs characteristic to CRF are hot extremities with turgid veins, polypnea, inspiratory dyspnoea, tachycardia, cyanosis, hepatomegaly and peripheral oedema. All of these signs are pathognomonic for right ventricular hypertrophy, with severe CRF. Diagnosis of right ventricular hypertrophy is confirmed radiologically, electrocardiographically and in ultrasonically. These investigations are required starting with stage IV of the disease (10-12 years). Cardiomyopathy and CRF target the basic disease, their prognosis and treatment being dependent on the evolutionary stage of the primary disease. In this evolutionary phase, the only effective treatment is oxygen therapy that can improve pulmonary hypertension. Reducing airway obstruction is vital, by aspiration of secretions and treating respiratory infections with antibiotics. Because of heart rhythm disturbances, drugs such as diuretics, digitalis and vasodilators are avoided since they may increase the rhythm disorders. The recommended vasodilator is oxygen that produces selective vascular bed dilatation and can prolong life and improve the quality of life of these patients.

Non-invasive assisted mechanical ventilation has been shown to be the only therapeutic method by which the average lifespan of genetic NMD patients can be prolonged. RF treatment by AMV was introduced in 1990. In most neuromuscular pathology centres, assisted mechanical ventilation is used only in the final stages when severe signs of hyperventilation and infectious complications occur. In these cases, patients are hospitalized in intensive care units, where tracheostomy and assisted breathing are practiced.

AMV is recommended by most authors in case of nocturnal hypercapnia (PaCO2 below 60 mmHg), caused by hypoventilation and VC at a value of less than 1000 ml. From the clinical point of view, the characteristic clinical symptoms are sleep disturbances and diurnal somnolence, tachycardia and dyspnoea [12,13].

There are various techniques and apparatuses of AMV are described in the literature [14,15,16]. The mostly used techniques are:

This technique is used in cases of severe RF that have not received early treatment or in cases requiringprolonged treatment. The method is only indicated in emergency cases due to tracheostomy secondary complications: arterial wall trauma with blood haemorrhage, scarred stenosis of the tracheal opening.

This AMV technique is most used because it is the least traumatic and with minimal longterm complications. It is used early in the phase of respiratory failure and in prolonged treatment [17,18,19]. 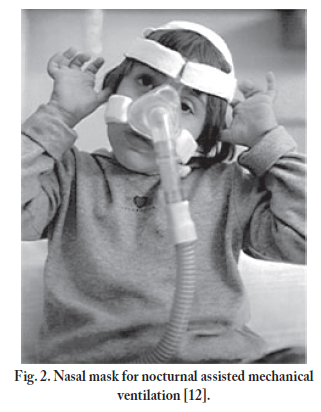 For preventive purposes, AMV is indicated in the compensated phase of ventilatory failure when the respiratory arterial pressure is normal and the VC curve is downward with an annual decrease of 200 ml. From a clinical point of view, this period corresponds to the stage of walking loss (10-12 years).

Currently, AMV is recommended in all patients with respiratory failure phenomena. It is the only effective way to improve the quality of life of patients with genetic neuromuscular diseases and to prolong the life span of these patients.