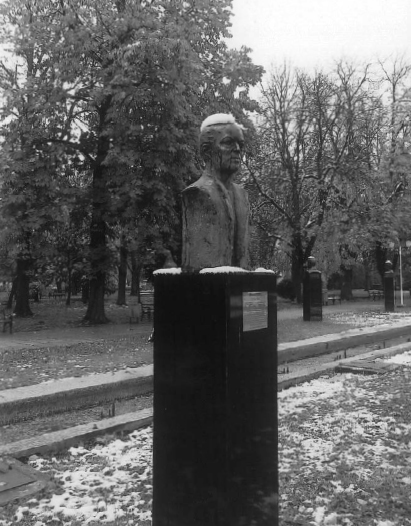 On 2 August, 2013 the statue of Prof. Eduard Pamfil was inaugurated in the gallery of Notable People from the Timisoara’s Central Park Anton Scudier devoted to the great personalities of the City, of Banat and Romania. The Master is placed side by side with Iancu Hunyadi, Sever Bocu, Alexandru Mocioni, Prince Eugene of Savoy and Count Mercy.

Important personalities of Timisoara, of Banat and of the Timis medical community attended this event together with the bust sculptor, Luigi Stefan Varga.

The text written on the bronze plaque reads:
”EDUARD PAMFIL 1912-1994. Professor and psychiatrist. He lived and worked in Timisoara, published numerous scientific papers and books. A high rank, European style, intellectual, Professor Eduard Pamfil, founded the Timisoara university psychiatry and created the Romanian anthropological psychiatry. He was the founder and head of the discipline of psychiatry within the Faculty of Medicine of the University of Timisoara.

For many decades Eduard Pamfil was a valued personality in the psychiatry from our country, placing Timisoara on a new and unique intellectual and spiritual orbit. Eduard Pamfil was one of the initiators of the Department of Timisoara Association of Scientists and a member of the Academy of Medical Sciences. For decades, his spirit has dominated the Romanian psychiatrists’ professional lives as well as Timisoara’s spiritual life. ” 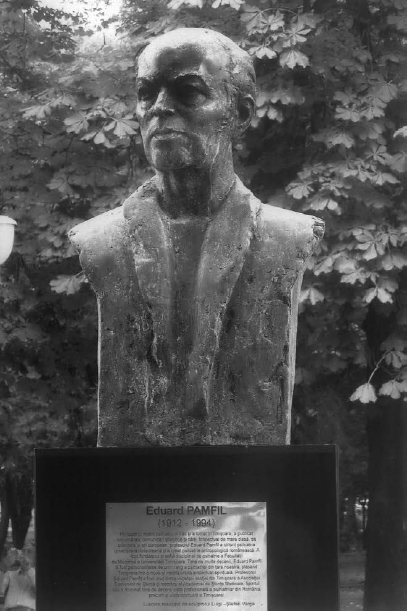 The City where Professor Eduard Pamfil lived and created brings him their gratitude solemnly placing his bust side by side with great personalities who have also contributed to its history and sciences. We have few statues dedicated to medical doctors and only three dedicated to psychiatrists (Al. Obregia, Gheorghe Preda and Ed Pamfil) .

We recall that, between 1948-1950, Prof. Eduard Pamfil was member of the team led by Dr. Florica Bagdasar, who was the founder of our specialty, together with V.Voiculescu, Prof. Dr. Ana Murguleţ, Dr. N.Toncescu, at the centre of Infantile Neuropsychiatry “Vasile Lascar” in Bucharest. Next, he was a lecturer of Psychiatry in Cluj, where he was arrested after a word of encouragement addressed to the Students’ manifestation on the occasion of the Union on January 24. Condemned to political prison, according to the documents of the then State Security, he was sent afterwards to isolation in hospital in the remote Siret NPI Hospital . I do not think it is wrong calling him a scholar and a martyr, since he was a creator of concepts and condemned politically for his beliefs about the value and beauty of the Romanian people.

Eduard Pamfil knew how to make out of the psychiatric profession a science of psychiatry and how to convey his great respect and great admiration for the people of any class, be they healthy or sick, normal or insane, workers and thinkers, children or adults, women or men. He left us his theoretical vision, a unique philosophical concept, to use it in our lives, in medicine, psychiatry. His links with child and adolescent neuropsychiatry have been continuous: in 1963, at the first conference of NPI and related professions in Timisoara, he presented the report which introduced a new concept hitherto unused by us, of the limit intellect. Further on, he attended many professional meetings, being one of the few psychiatrists who knew the importance of specialty dedicated to children and adolescents. He developed a synthetic material on the formation of human personality since childhood (article published in the Journal of Neurology and Child and Adolescent Psychiatry Romania).

Let us not forget that on December 22, 1989 we took him the news that Timisoara was declared a free city. The Professor spontaneously uttered the phrase: “Communism was born on the Nera and drowned in the Bega.”

When we sat around the Professor we used to feel like he conveyed serenity and exuded an atmosphere of both human and professional nobility. Next to him, I realized that there are many high school and university teachers, but few of them are masters. Eduard Pamfil was a Master creator, a humanist inspiring ideas, a wizard that we used to listen to with reverence, a creator of humans and of professional people.