Porencephaly is a type of cephalic disorder involving encephalomalacia.This is an extremely rare disorderof the central nervous system in which a cyst or cavityﬁlled with cerebrospinal ﬂuid develop in the brain (1).

Children with porencephaly may have poor or absent speech development, epilepsy, hydrocephalus,spastics contractures and mental retardation (2).

Diagnosis is usually made before the infant reaches his or her ﬁrst birthday (2). Antenatally, the diagnosis is performed with ultrasound and postnatally may be conﬁrmed by CT or MRI (2).

The prognosis for children with porencephaly varies according to the location and the extend of the cysts and cavities. Some children with this disorder develop only minor neurological problems and have normal intelligence, while others may be severely disabled and die before their second decade of life (2).

After the age of 7 months, the infant has repeatedly come to the neurologist because of motor retardation of the right upper limb and spasm crisis during ﬂ exion.

He has been hospitalized with the diagnosis of Westsyndrome, right upper limb monoparesis and porencephaly at the Infantile Neuropsychiatry Clinic of theEmergency Children’s Hospital from Timisoara.

EEG – slow polymorphic delta theta in left TP.Imagical aspect (only one exam from 2003; after 2003, the patient was lost from our supervision):
IRM – vast cerebral lesion, encephalomalacia type, at the left cerebral hemisphere level that aﬀ ects frontal,parietal and temporal lobe and tho aspects of porencephaly – one having large size (6 cm/2,5 cm) located on the frontal lobe on the touche fronto – parietal and the other of narrow dimensions located deeply on the left justaventricular level.The left ventricle and the left subarachnoid space are moderately increased.Without pathological contrast enhancement. Th e angioIRM was not performed (exam from 2003).

Porencephaly is, usually, the result of damage from stroke or infection, but it can also be caused by abnormal development before birth (wich is inherited and less common) (2).

As human malformation, most authors recognize two major sub groups (of porencephaly), based on both pathologic ﬁndings and etiologic hypothese: type 1 or encephaloclastic porencephaly (EP),and type 2 or development porencephaly (DP), withlatter being subdivided into schizencephaly and simple porencephaly (SP)(3)(4).

Cerebral hemorrhage is a well documentated cause of EP. The authors have provided very suggestive evidence of an association between inherited thrombophilia variants and encephaloclastic porencephaly (EP)(3).

The authors have reported ultrasound and magneticresonance imaging (MRI) ﬁndings in a fetus with intracranial hemorrhage and porencephaly, secondary tointrauterine cytomegalovirus (CMV) infections (6).

In a report of 10 pregnancies with CNS anomalies associated with in utero exposure to vasoactive drugs (predominantly cocaine), there was three with typical encephaloclastic porencephaly (EP) and one with a severe simple porencephaly (SP) (7).

The aspects of the lesions in our case (vast encephalomalacia with porencephaly), the unilaterality of the lesions and the fact that they were occupying the MCA territory determined us to indicate a perinatal ischemic (vascular) cause (cerebral ramolisment). Th e porencephaly situated deeply (justaventricular) indicate an ischemic (vascular) cause too, in the choroidal arteries territory.

Porencephaly results from infarction in the territoryof a major artery, usually the middle cerebral artery (8).

An infarct, that occurs during the antenatal or early postnatal period and acts in isolation, is a relatively rare cause of brain damage (8).Almost 90% are unilateral and in 83% the infarct is in the distribution of the middle cerebral artery (8).

It is presumed to be the result of embolization arising from placental infarcts or of thrombosis caused byvascular maldevelopment or sepsis (8). 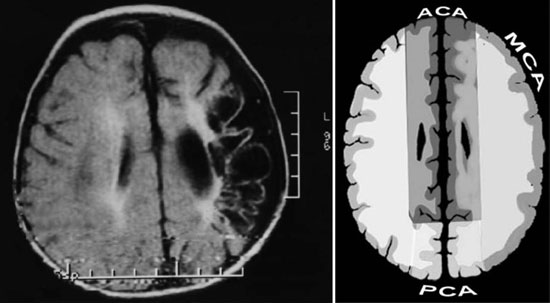 Correspondence to:
The Clinic of Neurology and Psychiatry for Children and Adolescents, No. 7 Corbului Str., Timisoara