The Conference was organized by the ROMANIAN ASSOCIATION FOR THE STUDY OF GAMBLING (RASG) – ASOCIAŢIA ROMÂNĂ PENTRU STUDIUL JOCURILOR DE NOROC with the collaboration of “Babeş-Bolyai” University, “Iuliu Haţieganu” University of Medicine and Phar-macy from Cluj-Napoca, EASG – EUROPEAN ASSOCIATION FOR THE STUDY OF GAMBLING, MEDICE, and CASINO INSIDE. The RASG was established during this year in Cluj-Na-poca and its aim is to offer an organized background for research in the field in Romania; the intention is to promote responsible gaming and prevent problem and pathological gambling. 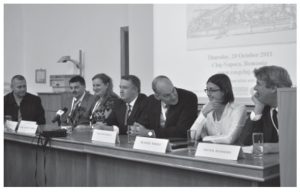 Assoc. Prof. Viorel Lupu and Ps. Ph.D. Candidate Izabela Ramona Todiriţă, members of EASG and participating in various international reunions in the field (Nova Gorica – Slovenia 2008, Vienna 2010, Warsaw 2011 – where they presented reports about Romania and about Central and Eastern Europe in gambling) considered important to organize an International Conference in Romania with the main focus on “Problem Gambling and Responsible Gaming – phenomenon, risks and coping” where a lot of professionals in medical and psychological services participated along with academics, researchers, pro-fessionals in gambling industry, members of Parlia-ment from Romania, mass-media, patients suffering from pathological gambling, their families and other persons interested in the issue.

The Conference’s program started with a short opening held by Assoc. Prof. Viorel Lupu, president of RASG, Pieter Remmers (Holland) from the executive committee of EASG, the Dean of the Faculty of Psy-chology and Educational Sciences from “Babeş-Bolyai” University, Cluj-Napoca, Prof. Călin Felezeu and as a representative of the vice dean of the “Iuliu Haţieganu” Faculty of Medicine and Pharmacy Prof. Dr. Fior Dafin Mureşan was Prof. Dr. Angelo Bulboacă. The first paper presented was a report regarding what was researched in Romania in gambling till the present. Assoc. Prof. Viorel Lupu (Romania) was the speaker for this paper and the author of the first hand-book on gambling in Romania published in 2008 and also the author of the Chapter “Romania” in the first European book “Problem Gambling in Europe” pub-lished in 2009 at Springer, New York.

It was underlined that after the latest regional studies developed in Transylvania along with Psy-chologist. Ph.D. Candidate Izabela Ramona Todiriţă the pathological gambling’s prevalence for children aged 11 to 19 years is 3.48%, and that of the problem gambling’s is approximately 24% with two pathological gamblers at 11 years.

The new Association’s aims were presented as well.

The next speaker was Psychologist Ph.D. Candidate Izabela Ramona Todiriţă, Vice-President of RASG (Romania) – who spoke about implementing gambling prevention programs in Romanian schools. She reported the results of the pilot study realized for the first time in Romania of its kind. In this study it was tested the efficacy of a gambling prevention program named “Amazing Chateau” developed by a group of Canadian experts in the field with rational emotive education. The first prevention program is developed as a multilevel interactive game on the computer children learning about the games of chance and the games of skills and how to differentiate between them. Both programs were efficient but giving specific information about games to children is more efficient.

The first guest abroad was Heather Wardle (Director of Research at the National Center in Social Research in London, Great Britain, specialist in prev-alence studies in pathological gambling) who talked about the way a national prevalence study can be de-veloped for problem gambling. She mentioned about the importance of directing funds from the guvern and other associations for establishing clearly the situation at a general level in Romania.

Pieter Remmers (from the executive committee of EASG, organizer of EASG Conferences, initia-tor of G4 (GLOBAL GAMBLING GUIDANCE GROUP – Olanda), remarkable moderator of the Conference spoke about 20 years of promoting of re-sponsible gaming in Europe offering models for our country too.

The Member of Romanian Parliament Mircia Giurgiu presented the modification in Romanian legis-lation and how this regulates gaming.

Prof. Dr. Adrian Opre from “Babeş-Bolyai” Uni-versity, Cluj-Napoca (Romania) presented the im-portance of prevention programs aiming at the socio-emotional development of children and underlined the adaptation of the programs to the specific cultural and political backgrounds. He sustains it is important to make gambling prevention program adapted to each level of age

A very interesting point of view presented Mal-colm Bruce, Director of Corporate Responsibility for the Betfair Group (Great Britain) about the way companies in the industry are responsible for the pro-moting responsible gaming.At the end of the day a round table was set and discussions were lead by Pieter Remmers and all par-ticipants were invited to take an active role during disputing different aspects talked at the presentations. Conclusions were drawn and the most important is “responsible gaming” in Romania, too.

It is important to continue research in what re-gards prevalence of problem gambling and pathologi-cal gambling in Romania and constituting groups of Gamblers Anonymous (GA).

From our point of view this Conference was a real success, starting a topic in Romania as gambling is and creating a phenomenon – a premise for future events of this kind. It was important to talk about legislation which has to be modified in order to be according to the European norms, to make connections between specialists and to set up future aims.

This Conference was very well organized in a short time and participation was significant and selective, being considered a starting point (“represents the star and not the end” as Assoc. Prof. Viorel Lupu, Presi-dent of RASG mentioned at the end of the event) because it offered a panoramic view of the phenomenon in our country.