Through this study the authors aimed to demonstrate the existence of a strong link between The Social Communication Questionnaire (SCQ) and the Early Childhood Inventory – 4 (ECI – 4) in the screening of ASD children. Both questionnaires were applied to a number of 100 children, aged between 4-7 years from a regular kindergarten from Timisoara. The statistical analysis of the data collected showed a strong relation between SCQ and ECI 4 in the screening of ASD children and also between the subscales of the questionnaires.

Autistic spectrum disorders are a complex group of neurobiological disorders which have in common (clinically) a qualitative deficit in the domain of reciprocal social interaction, communication and a very narrow domain of interest where we can identify restricted, stereotyped, repetitive behaviors. This abnormal or impaired development is manifest before the age of three years and represents a pervasive feature of the individual’s functioning in all situations (ICD 10).

Preschoolers with ASD have a marked deficit in the area of communication and reciprocal social interaction which is reflected in disturbances of social contact, visual eye contact, joint attention and emotional reciprocity, the capacity to share or to play. The play of an ASD child will differ in quantity and quality from the normal line of playing for this age or from the play of children with other developmental problems. This innate ability of children to communicate and play makes possible the flexible interaction between children in kindergartens and also is a predictor of acquisition of expressive language, adaptative functioning and future academic performance.

The aim of the study is to demonstrate the relation between the two questionnaires in the screening of ASD children.

The population consisted of 100 children, aged between 4-7 years old from a regular kindergarten from Timisoara, with respect to the confidentiality of data. We had the acceptance of the kindergarten staff and of the families. The ECI-4 was scored by the educator staff and the SCQ by the psychologist from the kindergarten.  The interpretation of both questionnaires was made by the team of Casa Faenza, a center for ASD children from Timisoara.

Both of the screening questionnaires were acquired legally by ACF.

The Social Communication Questionnaire is a brief instrument that helps evaluate communication skills and social functioning in children who may have autism spectrum disorders. The questionnaire can be used to evaluate children over age 4.0, as long as their mental age exceeds 2.0 years. A cut off score of 15 indicates a possibility to have ASD so the child has to be referred to further diagnoses.

The children evaluation questionnaire ECI-4 is a brief screening instrument based on the diagnostic criteria provided by the American Psychiatry Association (1994) in DSM IV.  The ECI-4 questionnaire includes 3 disorders mentioned in the DSM IV: The Autism Spectrum Disorder, Asperger’s Syndrome and the Pervasive Development Disorder – Not Otherwise Specified. The symptoms of the 3 disorders are included in the same category (M), but each disorder can be scored separately, score 1 (social interaction) – based on items 97-100, score 2 (communication), based on items 101-104, and score 3 (behavior) based on items 105-108. The rater has to make an addition of the scores obtained from the 3 domains. A score that is equal or exceeds 6 needs a further evaluation for ASD. (Kenneth D. Gadow, Joyce Sprafkin, ed. Cognitrom, 2010).

The statistic technique used is the Pearson correlation, which measures the variation degree between two variables, considered without any other connection to other variables. The next step consisted in scoring the questionnaires for further processing of the data. Therefore, the technical statistic program SPSS has been used for entering the raw data and analyzing the corresponding results.

Table 2. Values of the correlation coefficients between subscales of the social communication questionnaire (SCQ) and the subscales of ECI-4 (pervasive developmental disorder) 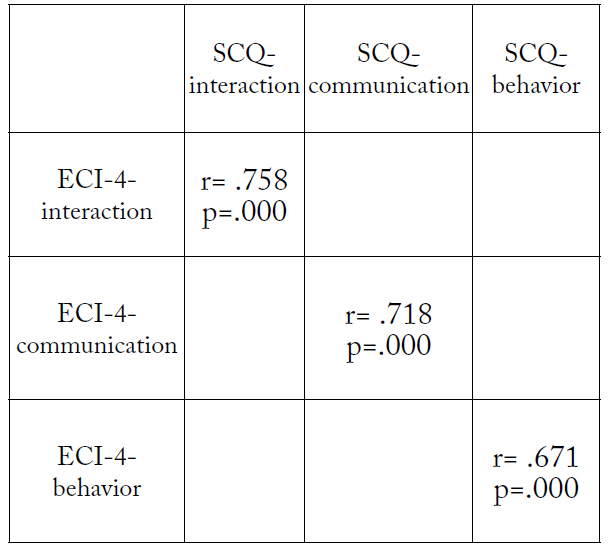 There is a strong relation between the subscales of the SCQ questionnaire used in the autism spectrum disorder screening. (table 3)

Table 3.  Values of the correlation coefficient between the subscales of the SCQ questionnaire (table 3)

There is a significant relation between the subscales of the ECI-4 questionnaire – pervasive development disorder scale used in the autism spectrum disorder screening. (table 4)

Table 4. Values of the correlation coefficient between the subscales of ECI-4 questionnaire pervasive development disorder scale used in the autism spectrum disorder screening 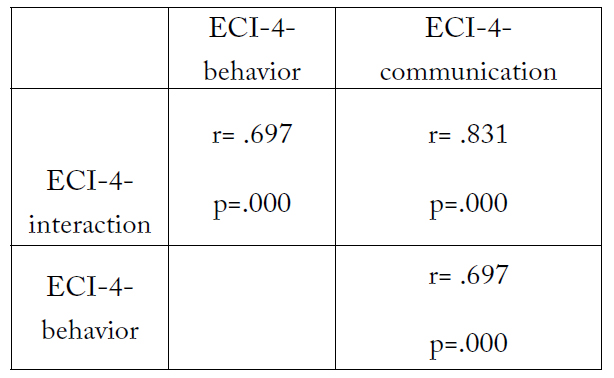 After analysing the scores, 3 of 100 children aged between 4-7 showed symptoms related to  autism spectrum disorders. These children should be reffered to evaluation afterwards by a specialist.

By calculating the correlation coefficient, results show a positive correlation (r=.865) between scores from the SCQ and the ECI-4 – PDD scale, at a significance level of p = .000 <.0.

Therefore, we can say that there is a strong connection between the two questionnaires, both of them aiming to highlight the main deficits in the pervasive developmental disorder: social interaction, communication and repetitive and stereotyped patterns of behavior.

The scores of the screenings provide high accuracy of the results, considering the strong link between the two.

Both questionnaires focus on the main deficits in the autism spectrum disorder, therefore following the children’s interest in other children, how they interact with each other, the presence of the social smile, but also the ability to offer help or initiate adequate social contacts.

As for communication in preschoolers, the items aim to highlight how they communicate, the proper use of verbal language, stereotypical expressions etc. Items of the two questionnaires also include restricted interests, repetitive, stereotypical behavior and actions, echolalia or unusual sensory preferences.

Statistical data show that the two subscales of the questionnaires are strongly related, therefore the second hypothesis is confirmed.

Statistical data show a correlation coefficient of  (r= .758), at a significance level of p=.000<.0, which is statistically significant and indicates a strong correlation between the interaction subscales of the two questionnaires.

The behavioral subscales of the two questionnaires are strongly connected (r= .671,  at a significance level of p=.000<.0) and they sinthetize the main deficits in areas like compulsions/rituals, verbal rituals, unusual interests, unusual sensory preferences, repetitive use of objects, hand and finger motor mannerisms).

Statistical data show a powerful connection between the subscales of the same questionnaires (table 3, 4), thus we can sustain that deficits present in one of the main areas of focus are strongly interlikned with deficits in other areas of interest. An impaired communication and a poor verbal language are strongly interlinked with the inability to interact, initiate social contacts, emphasize and with the presence of stereotyped behavior.