Arterial ischemic stroke is an acute phenomenon found in the pediatric population, having an incidence of 1,25 out of  100000 children per year.  The previous studies [1,2,3] have highlighted a correlation between the early onset of seizures and the arterial ischemic stroke, them being diagnosed in 19%  up to 44% post stroke. By  comparing the incidence of this phenomenon at adults (from 2,4 % up to 5,4%) we can make the conclusion that symptomatic seizures at the debut of arterial ischemic strokes  are more likely to appear in the children population. Also, the adults are not so likely to have seizures in the initial phase of cerebral stroke, in comparison with children [1,3].

THE AIM OF THE STUDY

Determining the incidence of seizures in the initial phase of arterial ischemic strokes and their impact in the child development.

In order to get the most truthful results the t student test was applied for comparing continuous variables and the χ2 test for discrete variables. We have used the Kaplan-Meier estimator for determining the comulative incidence of previously unprovoked seizures. The log-rank test was used in order to compare the risk of appearence of subsequent unprovoked seizures at children with and without early-onset seizures. Values with p<0.05 were considered statistical significant values.

The study lot was composed of 78 children, who corresponded to all the inclusion criteria for this study. Early-onset seizures were present at 20 children out of 78 (25,6 %), the average age of debut being 1,4±1,9 years, the children being younger than the ones who were not diagnosed with this type of seizures, 3,2± 6,2 years, p<0.001. Out of them, for 20 children (90 %), the seizures were the first manifestations of the clinical picture. The repartition of this convulsive acceses after the structure was: focal seizures diagnosed at 15 children (75%), 3 children had generalised seizures (15%) and in 2 cases the debut could not be determined neither as focal nor as generalized (10%). Out of all analyzed cases the frequent (daily) seizures were determined at 12 children (60%). Cases with only one seizure at the debut of the ischemic stroke were noted at 5 children (25%) and 3 children have developed status epilepticus (fig.1, fig. 2). 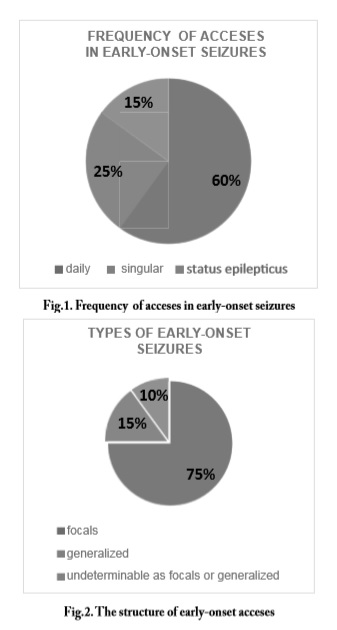 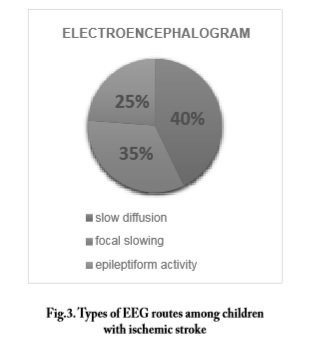 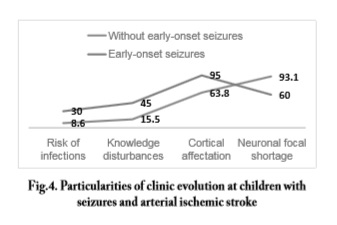 Out of 20 children who were diagnosed with earlyonset seizures, 13 (65%) had seizures that continued after 7 days post  arterial  ischemic stroke. One child (5%) who suffered from repeated seizures has developed new ischemic injuries, seen on MRI (fig. 6). 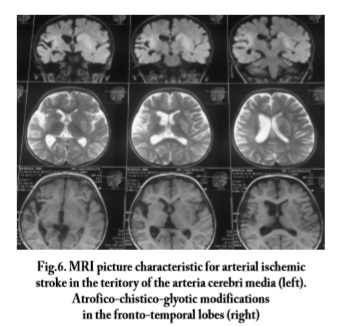 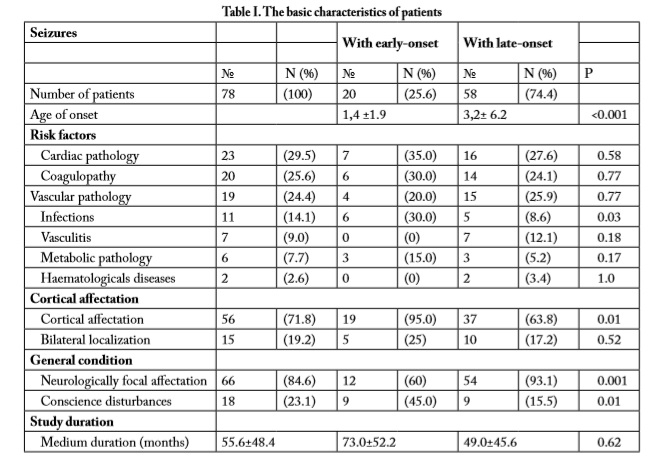 In this study we have concluded that the frequence of children who have presented early-onset seizures after the arterial ischemic stroke is 25.6%, in comparison with other studies that present values starting with 19% till 44% [1,5]. Also in the existing studies it is proved that the incidence of this kind of seizures is higher amongst the children than amongst the adults [3,4]. In our study we have confirmed this through the higher incidence of seizures among the younger children, in comparison with those who are older.

We have determined a connection between early-onset seizures and post arterial ischemic stroke epilepsy. The cumulative incidence of the development of late-onset seizures was of 72,3% for 4.5 years of follow-up. Children with early-onset seizures have developed post arterial ischemic stroke epilepsy in 60% of the cases. In the existent studies it was determined that children with post arterial ischemic stroke seizures were more likely to have epilepsy in the future [6,7,8], a fact confirmed n our study too.  In this study we tried to determine the risk factors for the recurrence of the post arterial ischemic stroke debut strokes in the future, but there were not found any statistically significant differences linked with the age or the sex of the children implied in this study or with the usage of the antiepileptic means in a prophylactic purpose. A lot of the existent studies have shown that the antiepileptic drugs used in the initial phases of the arterial ischemic stroke with the purpose of stopping the acute seizures do not reduce the risk of the development of epilepsy. In addition, the previous studies concerning the adult population have proved that the usage of antiepileptic medicines in the initial phases, in order to prevent the recurrence of seizures is not necessary [9]. However, we would like to mention that the therapeutic tactics is different in the adult vs pediatric population and additional studies are required for proving this hypothesis.